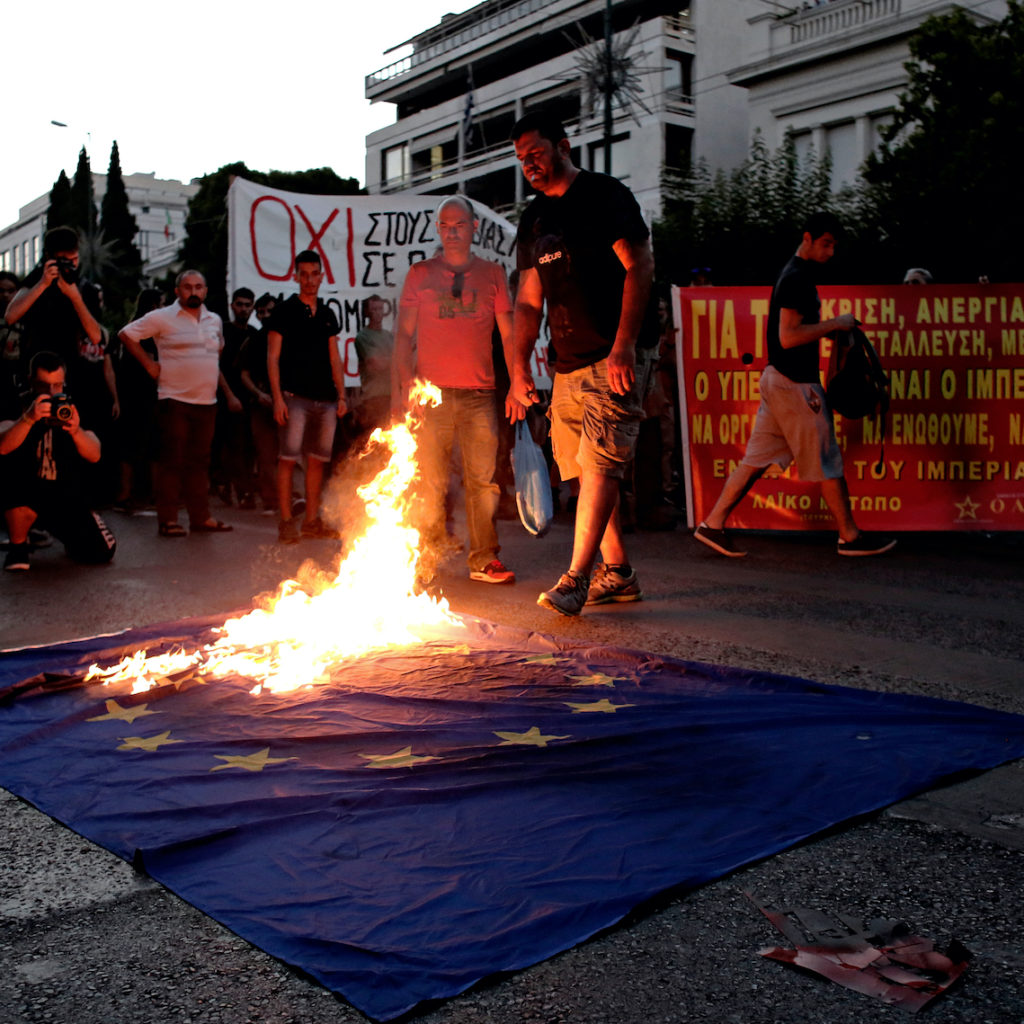 An anti-EU protester burns an EU flag outside the European Comission offices in Athens on July 2, 2015.

Soft Euroscepticism is where there is NOT a principled objection to European integration or EU membership but where concerns on one (or a number) of policy areas lead to the expression of qualified opposition to the EU, or where there is a sense that ‘national interest’ is currently at odds with the EU’s trajectory, according to a definition of Aleks Szczerbiak and Paul Taggart in an article. According to the scholars, Soft Euroscepticism can only meaningfully be said to exist where a party uses the rhetoric of contestation over the European issue as part of their political repertoire. “The point of identifying ‘Soft Euroscepticism’ is that it captures those positions that constitute real scepticism about the way European integration is currently developing,” they said.

In order to show that Euroscepticism is part of a process of Europeanization, Katrin Böttger and Gabriel VanLoozen wrote in an article that it is necessary to briefly define Europeanization. To them, Europeanization is not understood as an integrational bottom-up process, but exclusively as a top-down process. In general, this top-down Europeanization is defined as “A set of processes through which the EU’s political, social and economic dynamics become part of the logic of domestic discourse, identities, political structures and public policies.”

On the other hand, Susannah Verney, Kyriaki Nanou and Ben Clements wrote in an joint article that the category of Soft Eurosceptics is not only ideologically heterogeneous, embracing forces with wildly differing world views and philosophical starting points. “But it also encompasses a wide spectrum of difference in terms of stances towards integration, from critical pro-Europeanism to a differentiation from the existing EU which falls only a little short of rejectionism. Frustration with the all-encompassing nature of the term ‘soft Euroscepticism’ can be seen as an important motivation for the many analysts who have subsequently proposed alternative and more complex typologies of Euroscepticism in an attempt to achieve greater conceptual precision.” As the authors claim, Sharon Pardo and Neve Gordon wrote in an article that Soft Euroscepticism can be further sub-divided into “policy Euroscepticism” and “national interest Euroscepticism.”

The advantage of the term, according to Verney, Nanou and Clements, ‘Soft Euroscepticism’ is that it allows people to capture and conceptualise the space which stands between those who are uncompromisingly opposed to integration (Hard Eurosceptics) and those who not only support the process but also generally approve of its present form and direction (pro-integrationists).

In Poland, according to a study by Michael Toomey, there is a great differentiation between elite and mass attitudes. Whilst the public is generally Euroenthusiastic, with a certain level of Soft Euroscepticism and very little rejectionist rhetoric, the elites tend to be less enthusiastic, displaying higher amounts of Hard Euroscepticism and Eurorejectionism. Meanwhile, in the Czech Republic, there is much more parity between the views of the public and the elite. There is a generally large amount of public Euroscepticism, probably nearly on a par with the amount of Euroenthusiasm and Eurorejectionism exists to a considerable extent.

Meanwhile, the public opinion is very much Euroenthusiastic in Slovakia, with only a small amount of Euroscepticism, and virtually no Eurorejectionism worth speaking of. Notably, left-wing populist parties, such as the Greek SYRIZA, Spanish Podemos, and Dutch SP, all clearly remained on the soft side, expressing their discontent with the EU’s role in the Eurozone crisis in particular, but ultimately seeking a solution that implied a continuation of their country’s EU membership.

Szczerbiak and Taggart wrote in another article that the dramatic vote for Brexit has the potential to transform the terrain for Euroscepticism in the coming years. They predict that “the referendum result appears to have led to both a slight, short-term drop in support for public Euroscepticism across Europe and a ‘softening’ of its expression in party politics. In the longer term, however, it could transform the perception of rejectionist Hard Euroscepticism from a marginal political stance into a viable political project. Britain’s departure from the EU – and earlier failure to secure significant concessions in pre-referendum negotiations, in spite of threatening withdrawal – could also deal a severe blow to more qualified and contingent anti-federalist Soft Euroscepticism across Europe.”

According to the study conducted bySzczerbiak and Taggart, i) Hard Euroscepticism is far less common in member states than Soft Euroscepticism. Whereas eight member-states have no parties expressing Hard Euroscepticism only two have no parties expressing Soft Euroscepticism (with Spain having neither hard nor Soft Eurosceptic parties). ii) There is still the relative absence of parties of government. The exceptions to this come with the incorporation of new populist parties into government with the Freedom Party in Austria and the Northern League in Italy and with the Conservative Party in the UK which remains stubbornly exceptional to many of the wider trends. iii) Many of the parties have a low vote share. The average share of the vote for the parties is 5.6 per cent and there is little difference between the mean party votes for hard and soft Eurosceptic parties.