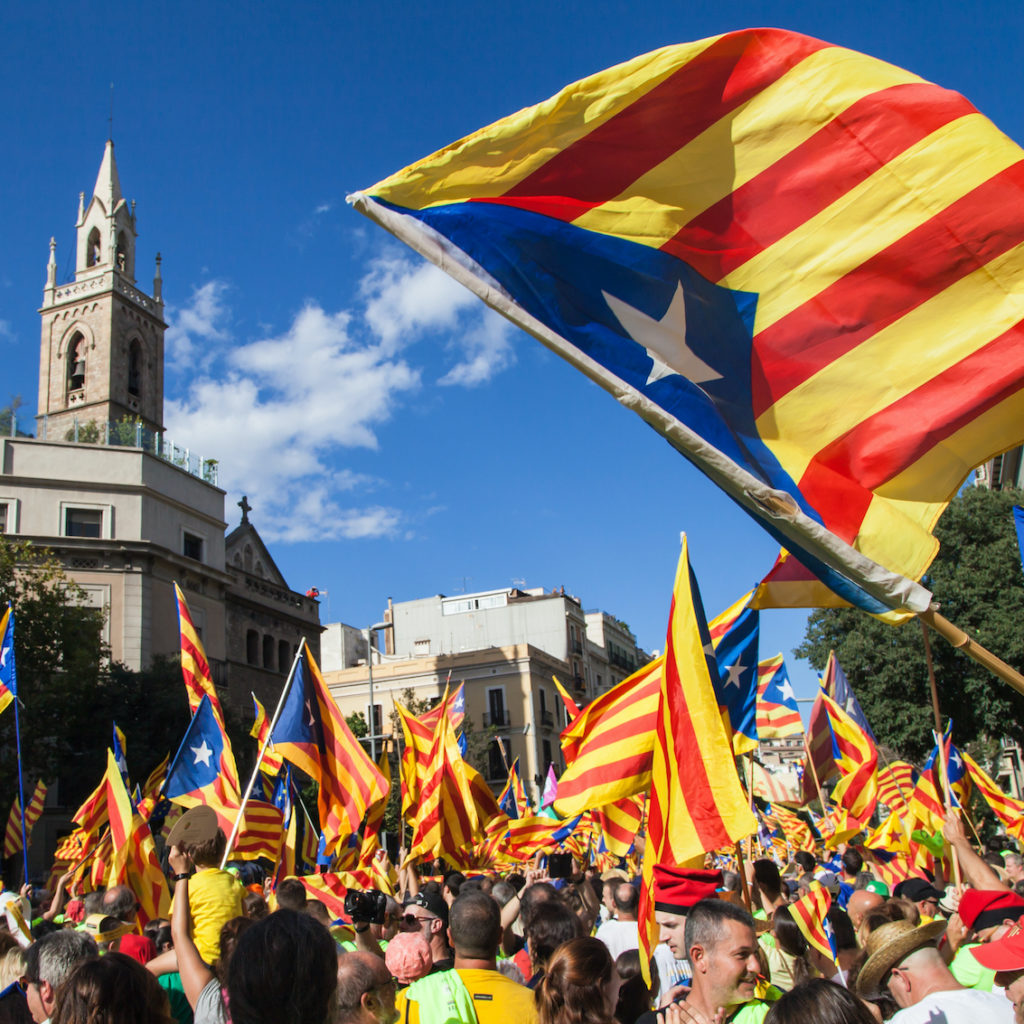 Catalans waving Estelada flags during march for independence on September 11, 2017 in Barcelona, Spain.

“Identity, defined as the expectation of predictable relationships within a given spatial domain, familiar faces in familiar places, must be defended. The remedy is to realign a meaningful territory and political voice. If this is populism it is territorial populism: the politics of turf in the broadest sense,” says Charles S. Maier in an article. To Maier, territorial populists rally supporters in reaction to the fragmentation of social cohesion for which reformist policies are blamed. “They claim to simultaneously fight for jobs at home, scrape away encrusted bureaucracies and overcome social fragmentation. Whether through xenophobic appeals, regionalism or a rejection of supranational economic commitments, they reaffirm the validity of a bounded political domain,” he adds.

According to Maier, territorial populists contest the perceived diffusion of decision-making to supranational authorities or offshore enterprises. He writes that “they promise to restore a sense of identity and to repatriate decisions to a cohesive community on a familiar home territory. ‘Ein Volk, ein Reich, ein Fuhrer’ was once the most ruthless of such rallying cries; it expressed the most rigorously simplistic answer to the moral crisis of the post-World War I era. But every moral crisis generates territorial populism as a political nostrum. And sooner or later it tends to single out as deviant and subversive those groups on the ethnic territory that stand for complexity and alternative principles of solidarity: immigrant communities and vulnerable minorities, Jews, homosexuals and the old imagined conspiracies of Masons and intellectuals that seemed so insidious in Franco’s Spain and Vichy France. One can hear the echoes of this sad discourse even in present-day Italy.”

Maier draws attentions to the fact that some of the contemporary territorial populisms, though not all, are reliably neo-fascist; they rehabilitate the records of the interwar fascist leaders; their participants threaten violence as a political recourse; they allow themselves the unbridled contemptuous language that was part of the fascist or Nazi repertory. He says, “These harsh tonalities of politics emerged in the first era of moral crisis during the 1870s and 1880s; they marked the language of Action Francaise, Austrian political anti-Semitism, Italian fascism and German national socialism; the contempt is heard among some of the ideologues of the Northern Leagues and National Alliance, and of course from Mr. Zhirinovsky.”

“Not every moral crisis deepens sufficiently for territorial populism to prevail,” says Maier and warns “However, periods of moral crisis tend always to provoke such a coalition as an inherent component of their historical dynamic. The political effort to impose an imagined territorial cohesion is in fact a key indicator of such crises. This does not mean that the territorial populists will win in the long run; they may indeed represent hopeless responses to a resolute choice of complexity and cosmopolitanism.”

According to Maier, territorial populism touches ugly chords of prejudice and it raises nationalistic instincts that the West has not had to contend with for many decades, and it introduces an element of incalculability into each country’s public life and into the relations of nations with each other. “During moral crises and their aftermath, the advocates of cosmopolitanism and compromise, pluralism and rationality are never in full control. Nonetheless, tenuous leadership is no mean achievement. It would be far more perilous to try to outbid territorial populists, for such a policy will always skid out of control,” he concludes.

On the other hand, according to an article by Reinhard Heinisch, Emanuele Massetti and Oscar Mazzoleni, at first sight, there might seem a full overlap between the territorial organization of parties and their ethno-territorial ideology. This because regionalist parties are also regional, in the sense that their party organization is present only in a specific territory and they compete in elections only in that territory (or ethno-linguistic community in the case of Belgium) within the state; while state nationalist parties operate statewide.

Meanwhile, it is an undeniable fact that secession has become an endemic problem around the world. The list of peoples, republics, provinces, territories, and areas aspiring toward secession covers the globe. In addition to Quebec in Canada as well as the vast number of potential and actual situations in sub-Saharan Africa, there are the Basques and Catalans in Spain, the Corsicans in France, the Scots and Welsh in Great Britain, the Sikhs in Punjap and Muslims in Kashmir of India, the Tamils in Sri Lanka, the Inner Mongolians and Tibetans in China, and the Kurds in Turkey, Iraq and Iran. There were the Slovaks in Czechoslovakia, the Slovenes and Croats in Yugoslavia, the Turks in Cyprus, the Latvians, Lithuanians, and Estonians, Ukrainians, Armenians, and Georgians in what was the Soviet Union, and the Eritreans in Ethiopia. Even the Palestinians in the West Bank and Gaza share some kinship with separatist movements that have secede or are in the process of achieving de facto and de jure secession.

Elias, A & Mees, L 2017, ‘Between accommodation and secession: Explaining the shifting territorial goals of nationalist parties in the Basque Country and Catalonia’, Revista d’Estudis Autonòmics i Federals, no. 25, pp. 129-165.