Grief, Rage, and Courage at COP26

At the end of the conference, the 1.5-degree goal still appears far out of reach. “Beyond that threshold,” scientific consensus warns, “the likelihood significantly increases of deadly heat waves, droughts, wildfires, floods and species extinction. The planet has already warmed by 1.1 degrees Celsius”. With this dire situation in mind, climate activist Greta Thunberg has called COP26 a “global greenwashing festival” – using a term coined in the 1980s that refers to corporate sustainability claims that do not actually improve the environment.

Observing the 2021 UN Climate Change Conference (COP26) from a virtual distance has created a fractured impression. The official program website shows a swirling green and purple Earth, with links to live-streamed press conferences, speeches, and the #TogetherForOurPlanet Twitter feed. This Earth looks clean and healthy, as if such an ideal were an easy goal to reach. Meanwhile, mounds of trash fill the outskirts of the conference city Glasgow, amid a garbage-collectors’ strike that makes human “throwaway society” all too clear (Gross, 2021).

News reports showed internal fault-lines even before the conference began. In the pre-conference summit in Italy, G20 leaders from the wealthy countries “collectively responsible for around 80 percent of current greenhouse-gas emissions worldwide” largely failed to come together, though they did agree to cuts in methane leaks and in coal financing overseas (Economist, 2021). Protests on the outskirts of the main Glasgow conference and around the world have included thousands of young people, who insist that carbon reduction pledges fall woefully short of the profound value shifts and decolonializing efforts that must occur in order to avoid unlivable conditions for humans and countless other species (Pruitt-Young, 2021).

COP26’s makeup of 30,000 delegates consisted mainly of political and business leaders, who worked to draft a document that, before the delayed end of the conference, reflected disappointment in wealthy countries’ failure to reach earlier goals of financial reparation to their poorer, more climate-stressed neighbors, as well as “rage” at ongoing resistance to urgent carbon-cutting measures (New York Times, 2021). The final document created a new “Glasgow Climate Pact” that includes accelerated carbon-reduction plans, efforts to support poorer countries in adaptation measures, and worldwide infrastructure for a carbon market, but extends the target year for emissions cut to 2030, rather than the 2025 date set in the 2015 Paris agreement – “[n]ot the stuff of triumph, but not a trainwreck, either” (Economist, 2021).

Speeches included several long, populist ramblings (by India’s prime minister Narenda Modi, for example, who did conclude with a concrete pledge to “reach net-zero emissions by 2070” [Economist, 2021]), but some voices from marginalized communities also found a place to be heard. Elizabeth Wathuti, a climate activist from Kenya, named the climate-change-induced drought leading to failed harvests and starvation in her country, where she has seen children crying by a dried-up river after walking twelve miles to reach it with their mother. “As we sit comfortably here in Glasgow,” she called for an opening of hearts and a moment of silence for those suffering and dying in poorer countries affected most painfully by global warming (see the complete video here). As Mary Annaïse Heglar has noted, “Climate grief is not an illness to cure. It is a condition we will have to live with.” Grief can lead to courage (Marvel, 2018), if not the easy optimism some may expect from a global climate conference.

The first week of climate talks ended with a focus on agriculture and land use, with somewhat vague pledges to increase international “dialogue” on the commodities that lead to deforestation (beef and palm oil, for example) and to promote “innovation” in sustainable farming, without the concrete goals or attention to biodiversity that protesters demanded (Economist, 2021). The second week began with discussions about adaptation to the inevitable droughts, floods, and famines that will result even in the best-case scenario of the planet’s warming to 1.5 degrees Celsius, and about “loss-and-damage” efforts in which wealthier countries compensate poorer ones for the damage their carbon emissions will continue to cause. These discussions have been largely disappointing for developing nations (Sengupta, 2021).

On November 10, a draft of COP26’s “cover decisions” outlined stronger pledges than in the Paris agreement to reduce emissions (and, unlike that document, actually uses the phrase “fossil fuels” [Economist, 2021]), but without mentioning specific dates or enforcement measures, and without offering developing countries the financial assistance they need to help with decarbonizing efforts. One dramatic and encouraging turn of events occurred that day, when China and the US announced a long list of future joint measures to reduce emissions in concrete ways, from research and alternative energy policies to methane reduction and bans on illegal deforestation (Economist, 2021). Critics have noted, however, that China’s methane efforts are only are their own terms, and the joint list is still not enough to curb global warming already out of control (NPR, 2021).

At the end of the conference, the 1.5-degree goal still appears far out of reach. “Beyond that threshold,” scientific consensus warns, “the likelihood significantly increases of deadly heat waves, droughts, wildfires, floods and species extinction. The planet has already warmed by 1.1 degrees Celsius” (New York Times, 2021). With this dire situation in mind, climate activist Greta Thunberg has called COP26 a “global greenwashing festival” – using a term coined in the 1980s that refers to corporate sustainability claims that do not actually improve the environment (Watson, 2016). The “PR event” that Thunberg calls COP26 has failed to address deeper issues of “colonialism and beyond” that cost poorer countries as their wealthy counterparts show unwillingness to sacrifice fossil-fueled industrial comforts (Campbell, 2021). 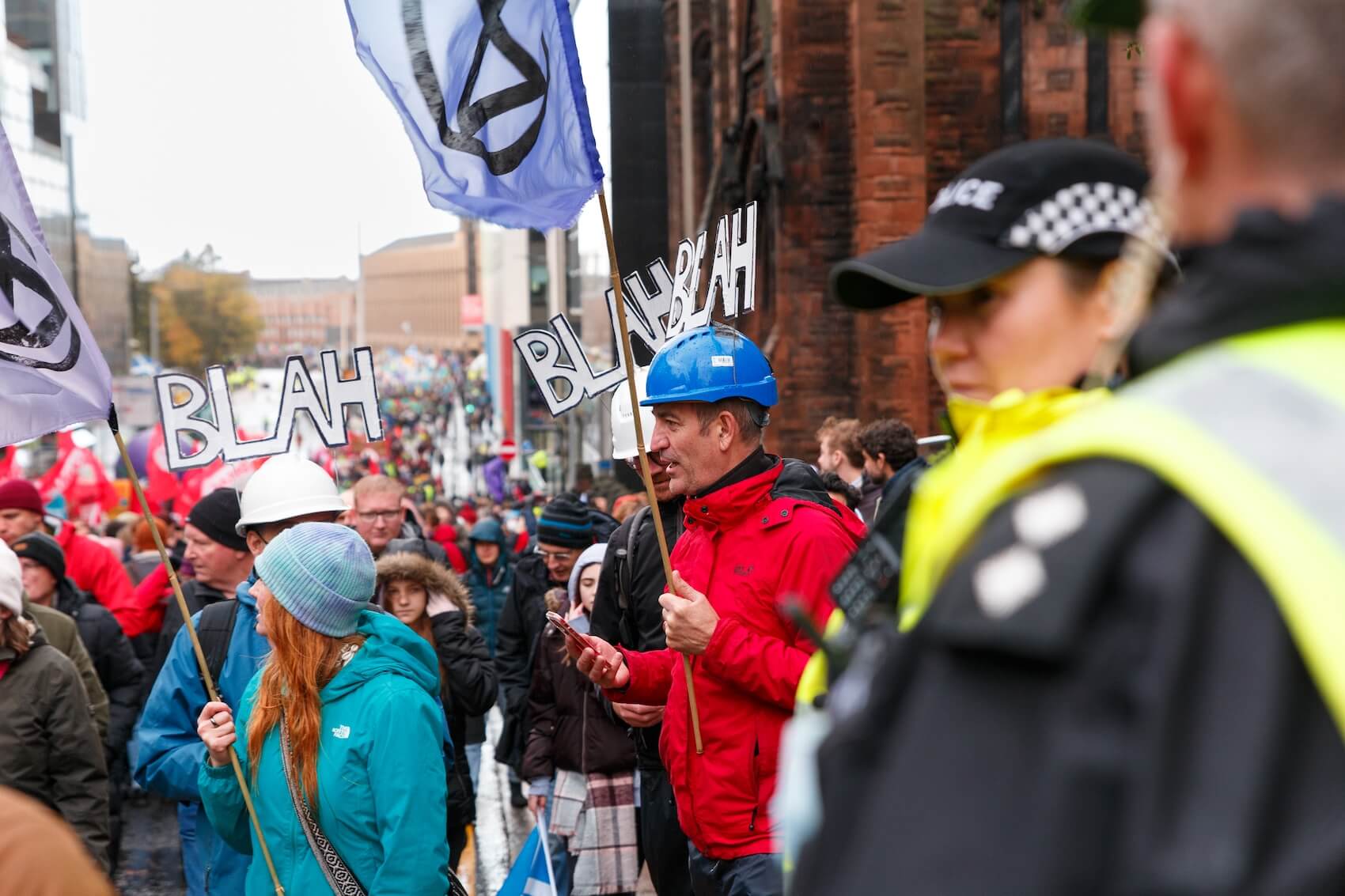 Alongside the official meetings in Glasgow, a large-scale “counter summit” took place, drawing on indigenous and other “frontline” communities. This alternative conference also included progressive lawmakers and landworkers, along with representatives from trade unions, social justice organizations, and faith groups (Lakhani, 2021). On the design level, the summit’s website applies COP26’s signature purple background but with emergency- and heat-signaling orange as well. Images of humans attached to rising plant spores offer a sense of hope from the ground up.

Discussion topics at this People’s Summit for Climate Justice included carbon pricing, the impact of British mining in Brazil, trauma and resilience among activists, environmental warfare in Kurdistan, and energy transitions in Latin America. The program offered virtual as well as in-person participation and translation services, to be as globally inclusive as possible. While this conference may not have been as optimistic as its official counterpart (with headlines such as “Landmark Agreements at COP26 Put Nails in Coal’s Coffin” celebrating cutbacks in large banks’ support of fossil fuels), it has taken a more local, grassroots approach that does not shy away from painful questions of colonialism, racism, and “slow violence” (see Nixon, 2011).

Where to go from here? For all its limitations, the very fact of US-Chinese cooperation is a large and unexpected step. Financial commitments to decarbonization and reparations may materialize at least in time to keep warming below the truly catastrophic 2.7-degree increase the world is headed toward today (Chestney, 2021). Elsewhere in the world, many communities feeling the stresses of global warming still find themselves left out, however, from deforested Indigenous zones in Brazil to rural areas in France with out-of-reach gas prices, where residents feel very far away from the “green energy transition” discussed in Paris (Cohen, 2021).

Historian Andreas Malm takes a boldly Leninist approach to current climate debates, seeing the need for a revolution that actually challenges capitalism. Though Malm might be accused of “cosplaying revolution while the planet burns,” one reviewer of his new book White Skin, Black Fuel finds his attitude to be one of “tragic realism,” a historically informed climate grief that calls for courage, too (Tooze, 2021). Malm and his collective call for direct and even destructive action to dismantle new carbon-emitting machines, pipelines, and even the homes of the planet’s most damaging capitalists (see Malm et al., 2021). But this radical approach is not the only possible solution to a climate crisis that leaves no safe place on Earth (Peach, 2019).

Indigenous and other frontline leaders, like those who participated in the COP26 counter-conference, are bringing generations-deep wisdom to the crisis at hand. As Ute Indian Tribe (Utah, US) representative Braidan Weeks has put it, “Creating a sustainable future means empowering communities to take care of themselves and reassess that value of always having to produce. Why do you need five hundred pounds of tomatoes? You don’t. My community needs a hundred pounds of tomatoes and we do that by growing and sharing it together” (Bitsóí and Larsen, 2021: 67). Traditional controlled-burn practices to reduce the impact of wildfires (Sommer, 2020), international support of the Water Protectorsorganizing to stop the Dakota Pipeline in the US, and land-rights movements from the Arctic to Latin America are only a few of the efforts inspired by communities who have long put circular economies over ideologies of endless growth.

On a smaller scale, individuals can still make a difference in choosing how to consume (or not), how to travel (or not), and how to recreate responsibly in natural areas. Developing an attitude of care that does not avoid grief or even rage is a good place to start, to cultivate the courage needed for protecting Earthly futures. For those of us lacking the youthful energy of activists like Greta Thunberg and Elizabeth Wathuti, the example of an older climate educator in Sweden is inspiring: 73-year-old Gitte H.D. has just released a “climate rap” that demonstrates how people of any age can feel and act for climate care. There’s still time to learn and change. Enjoy her video here, with the kind of concrete advice large climate conferences often fail to deliver.