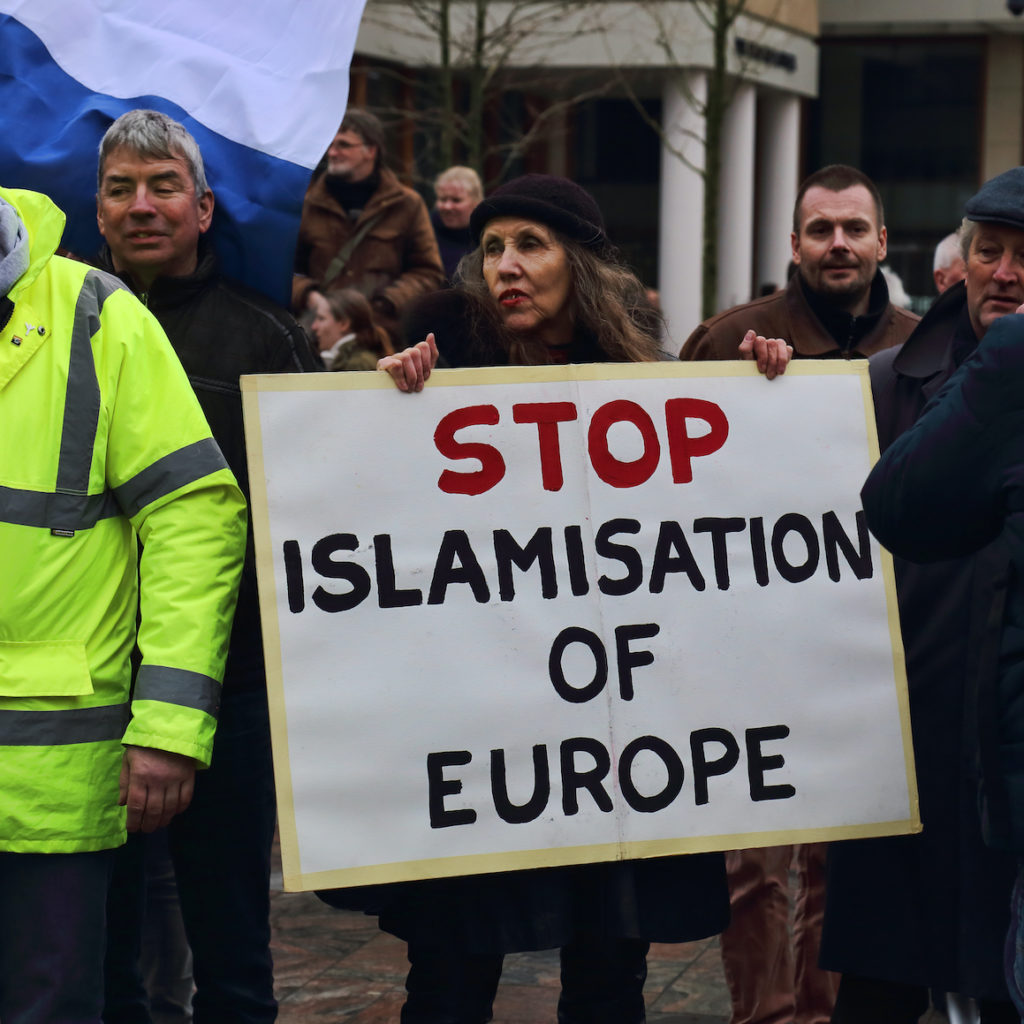 People demonstrate against so-called Islamization, carrying signs with slogans in Rotterdam, The Netherlands on January 20, 2017.

Cultural populism claims that the true people are the native members of the nation-state, and outsiders can include immigrants, criminals, ethnic and religious minorities, and cosmopolitan elites, according to a report by Jordan Kyle and Limor Gultchin. They also said that cultural populism tends to emphasize religious traditionalism, law and order, sovereignty, and painting migrants as enemies…

According to the report, the central element that distinguishes cultural populism from other forms of populism is its emphasis on race, ethnicity, religion and/or identity. Cultural populists claim that only members of a native group belong to the true people and that new entrants or cultural outsiders pose a threat to the nation-state. Thus, cultural populist parties often have issue ownership in their countries over immigration and over debates, ethnic diversity and identity politics.

According to a book written by Jim McGuigan, “cultural populism is the intellectual assumption, made by some students of popular culture, that the symbolic experiences and practices of ordinary people are more important analytically and politically than Culture with a capital C.” McGuigan argues that that cultural analysts of a populist persuasion are mainly concerned with types of product and the sociality of their reception rather than the selective naming of works and authors is also in itself significant.

McGuigan insists that ‘the study of culture is nothing if it is not about values.’ McGuigan’s remarks may prompt a more extensive critique of the aesthetic and political pretensions, or evasions, of cultural populism. Such a critique is needed, not because populist approaches are universal or predominant, but because they are rarely explicitly opposed; to oppose them, after all, brings one face to face with those underlying questions about value, and about the authority of those who would pronounce on matters of value.

According to an article by Eugene Goodheart, Donald Trump’s real populism is cultural rather than political or economic. He argues that it is to be found in the ways in which Trump thinks and speaks. “As a ‘thinker’ (the word needs to be enclosed in quotation marks), he believes that the truth is subjective; what counts as reality is what he believes it to be, the product of the thoughtless and vain meanderings of his mind. There is no objective truth. What others believe it to be doesn’t count, unless it conforms to his belief,” he explains.

According to Goodheart, Trump’s ‘epistemology’ (again quotation marks required) doesn’t qualify as relativism since relativists allow for the perspectives of other minds. “It is subjectivism, Trumpian subjectivism,” says Goodheart and adds that “Trump’s truth is all about himself in contrast to ‘the fake truth’ of the media and ‘the scientific hoax’ of global warming. And then there is his speech: often ungrammatical and incoherent, the way ‘real people’ speak. When he speaks, he speaks to us and like us many of his core followers, ‘ordinary folk,’ say.”