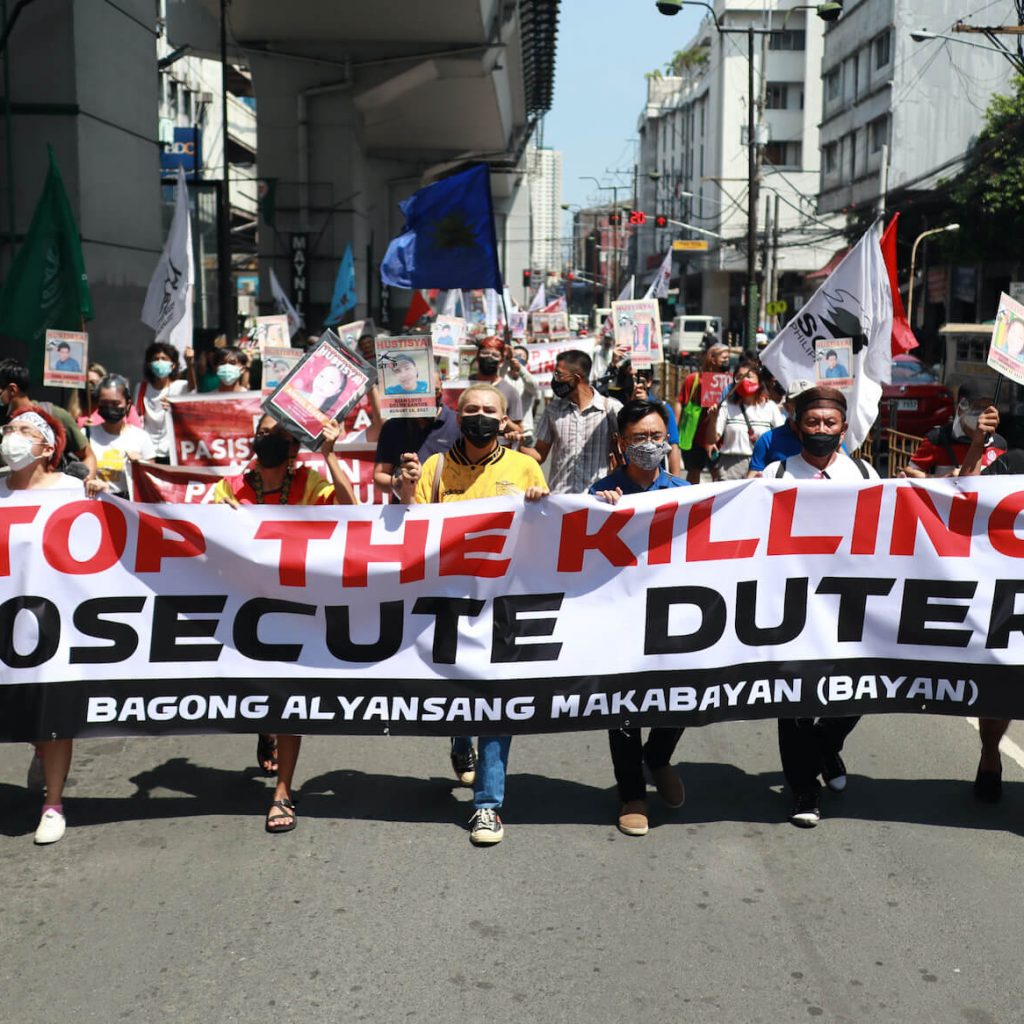 People flooded the streets of Manila to demand justice for all the victims of extrajudicial killings that happened during the time of President Duterte on June 30, 2021. Photo: Santino Quintero.

Law-and-order populism (also names as penal populism) is a process whereby the major political parties compete with each other to be “tough on crime”. It is generally associated with a public perception that crime is out of control and tends to manifest at general elections when politicians put forward hard-line policies which would remand more offenders into prison prior to sentencing and impose longer sentences. Law-and-order populism generally reflects the disenchantment felt by a distinct segment of society — crime victims and their representatives — who believe they have been left out, or simply forgotten, by justice processes which focus on the offender.

Thus, law-and-order populism plays on citizens’ anxieties about safety and desires for punitive politics. This form of populism tends to promote punitive short-term solutions to multifaceted problems, often at the expense of human rights. The Philippines’ President Rodrigo Duterte is a prominent example of a populist rising to power through law-and-order rhetoric.

According to scholars, legislative populism has long been notable in relation to criminal law, and there is now a relevant comparative literature on changing patterns of criminalization and punishment – including a literature on the criminalization of migrants – is framed in terms of law-and-order populism (penal populism) or ‘populist punitiveness’.

According to John Pratt’s book titled Penal Populism, despite widespread usage of the term ‘penal populism’ in much analytical work on contemporary punishment, what populism might actually be has to date received very little consideration. Instead, it is usually treated as a commonsense given, a label to attach to politicians who devise punitive penal policies that seem to be in any way ‘popular’ with the general public. “However,” to Pratt, “penal populism is both a more complex issue than is acknowledged in those commentaries in which it is seen in this rather limited way; and more structurally embedded, representing a major shift in the configuration of penal power in modern society, rather than something within the purview of politicians to tinker with as they please. This becomes clear when we grasp the sociological significance of populism itself.”

Pratt underlined the fact that in one of the first examinations of the term, it was observed that ‘populism exists wherever there is an ideology of popular resentment against the order imposed on society by a long established, differential ruling class which is believed to have a monopoly of power, property, breeding and fortune.’ To the author, penal populism feeds on division and dissent rather than consensus. In these respects, it is as if a huge gulf now exists between the penal expectations of the public at large and the policies and practices of the criminal justice authorities.

According to a paper written by Nicola Lacey, law-and-order populism, of course, predates the populist resurgence and it has deep historical and institutional roots. Much of the drive for criminalization and penal severity comes not from populism, but rather from fear and insecurity attendant on crime, that fear and insecurity being projected onto ‘outsiders’ in the form of offenders. There is a structural analogy with populism here, but the outsiders are not necessarily the same as the enemy outsiders on which populism currently has its focus.

Indeed, according to Lacey, they are disproportionately members of the groups whose economic dislocation and exclusion has fed the populist surge of recent years. So it is probably more accurate to see overcriminalization and penal severity as themselves products of some of the larger economic, social and political forces which have created populism itself: perceived weaknesses in national state sovereignty, prompting a resort to criminalization as one of the few tools of governance still within nation state control; social conflict; a failure to ensure that an adequate majority feel that they have a stake in the prevailing order; and persistent inequality.

Lacey wrote that the other area of criminalization which on the face of it has been shaped by populism is so-called ‘crimmigration’. This refers to the increasing resort to criminalization or to quasi-criminalization as a way of disciplining, excluding and indeed expelling migrants or those seen as presumptively unentitled. The blurring of the boundaries between administrative and criminal law, notably in the case of immigration detention, and of the boundaries between civil and criminal law, as in the use of a range of civil, typically preventive orders whose breach nonetheless implies criminal or quasi-criminal liability, is of particular concern in terms of the threat to migrants’ and asylum seekers’ human rights but also of erosion of the rule of law quite generally.

“As Vanessa Barker has argued in a powerful recent analysis of the emergence of ‘penal nationalism’ in relation to migration in Sweden, ‘problems with pluralism, ethnic diversity and immigration are much more mainstream, long lasting and institutionalized than the current focus on populism allows,’” wrote Lacey and added that “Penal nationalism, seen as ‘a form of state power that relies on the coercive tools and moral weight of criminal justice to respond to unwanted mobility in the service of national interests’ may most certainly threaten aspects of the rule of law including generality, publicity and congruence, as well as the robustness of human rights. It may even produce a democratic deficit. But it is not necessarily a straightforward result of populism.”