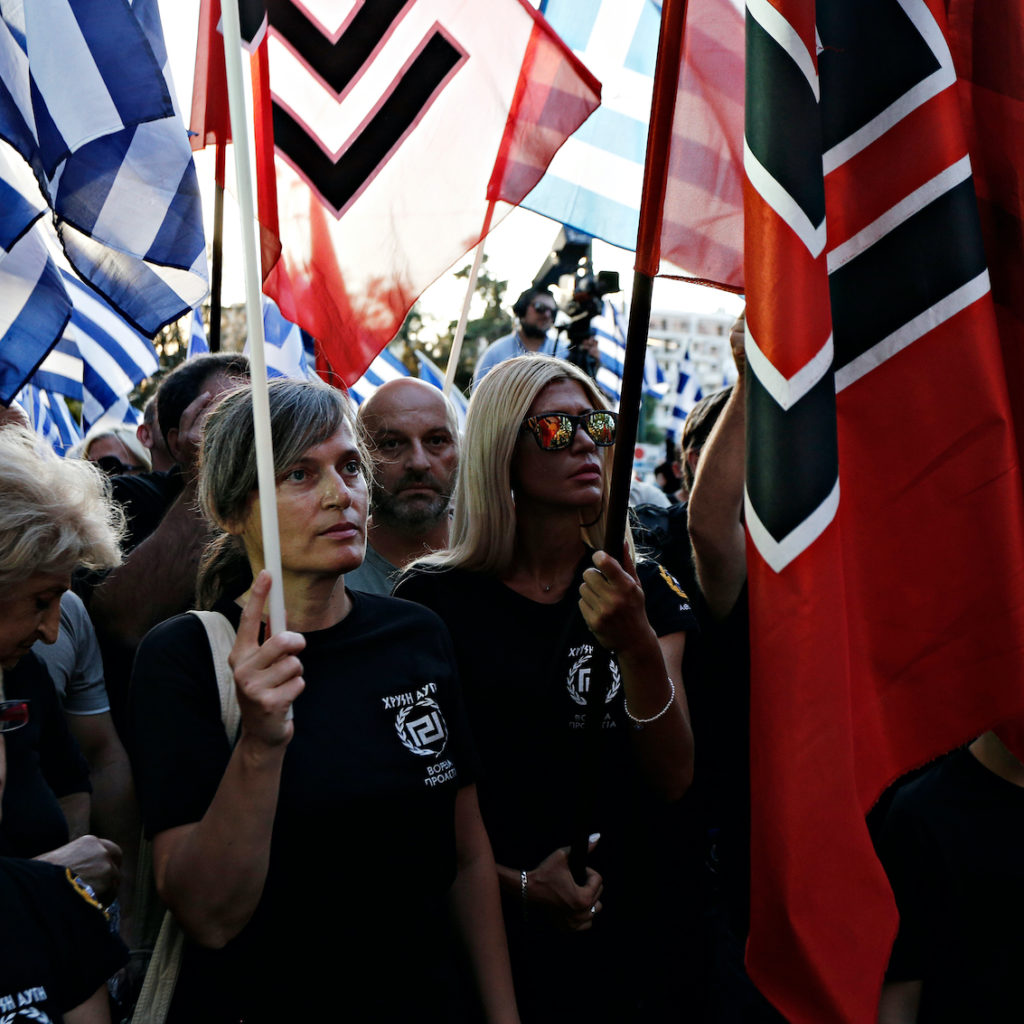 Supporters of the extreme far-right Golden Dawn political party wave Greek flags during a pre-election rally in Athens on Sept. 16, 2015.

Neo-Nazism consists of post-World War II militant, social or political movements seeking to revive and implement the ideology of Nazism. Neo-Nazis seek to employ their ideology to promote hatred and attack minorities, or in some cases to create a fascist state. It is a global phenomenon, with organized representation in many countries and international networks. It borrows elements from Nazi doctrine, including ultra-nationalism, racism, xenophobia, homophobia, anti-Romanism, antisemitism and anti-communism. Holocaust denial is a common feature, as is the incorporation of Nazi symbols and admiration of Adolf Hitler.

In some European and Latin American countries, laws prohibit the expression of pro-Nazi, racist, antisemitic or homophobic views. Many Nazi-related symbols are banned in European countries in an effort to curtail neo-Nazism. Some critics have sought to draw a connection between Nazism and modern right-wing populism in Europe, but the two are not widely regarded as interchangeable by most academics. However, in Austria, the Freedom Party of Austria (FPÖ) served as a shelter for ex-Nazis almost from its inception. Jörg Haider became leader of the FPÖ and offered partial justification for Nazism, calling its employment policy effective. In the 1994 Austrian election, the FPÖ won 22 percent of the vote and showing that it had become a force capable of reversing the old pattern of Austrian politics.

On the other hand, Barbara Rosenkranz, the FPÖ’s candidate for the Austrian presidential election, 2010, is controversial for having made allegedly pro-Nazi statements. Rosenkranz is married to Horst Rosenkranz, a key member of a banned neo-Nazi party, who is known for publishing far-right books. Rosenkranz says she cannot detect anything “dishonourable” in her husband’s activities.

On the other hand, fueled by an immigration backlash — Sweden has accepted more refugees per capita than any other European country — right-wing populism has taken hold, reflected most prominently in the steady ascent of a political party with neo-Nazi roots, the Sweden Democrats. In elections in 2018, they captured nearly 18 percent of the vote.

Moreover, according to an article by Thomas Klikauer, since 24th October 2017, Germany’s parliament has 92 new neo-Nazis. “In a colorful picture on parliamentarian seating arrangements, German officialdom has assigned the color blue to the crypto-fascist AfD (Alternative for Germany), not the traditional Nazi color brown. Modern populism demands that today’s Nazis no longer call their party NSDAP. Today, it is called AfD. Despite the misleading blue, AfD populism remains deeply fascistic rejecting much of what modernity has to offer. It is profoundly xenophobic, racist, glorifying heroic manliness and it is misogynistic,” wrote Klikauer. He added that “Their parliamentarian task is to frame outright Nazi populism as the voice of what AfD ideology calls ‘concerned citizens’.”

“Much of AfD populism centers on racism often expressed as a xenophobic hate of everything foreign. Accordingly, it draws a ‘sharp line’ between the Germanic race and multiculturalism and Islam. Xenophobic populism is often underscored by a hatred of modernity,” stated Klikauer. To his article, individual freedom, democracy, a free press and liberalism are values AfD populism rejects. “True to Nazi populism that still lingers in Germany, the AfD believes in Germanic greatness, a racially cleansed Aryan Volk, and a strong nation,” he said. Klikauer also claims that AfD populism carries one of its strongest connections to Germany’s Nazi past through the idea of the “Reichsbürger”. To him, its close approximation is US-American Sovereign Citizens. The core idea is Christian fundamentalist and that modern states are part of a Global Jewish Conspiracy.

“While generally the FPÖ has reduced its extremist rhetoric, some more extremist members of the party like the chairmen of its parliamentary faction Johann Gudenus did not,” says Karin Liebhart in an article. As she underlinedGudenus publicly discredited LGBTQ people in Austria and echoed antisemitic conspiracy theories concerning George Soros. Yet, without any consequences. Also, Herbert Kickl, the FPÖ interior minister, suggested that asylum seekers should be “concentrated” in one place, a clear nod to Nazism.

Liebhart reminds also the fact that Austrian deputy chancellor Heinz-Christian Strache publicly rejected antisemitism, Holocaust denial, and racism, even during a speech delivered to a far-right audience on occasion of the controversial right-wing Academics Ball 2018. Strache continues attempt to clean up the party’s image, for example by publishing a so-called “Rot-Weiss-Rot Erklärung” on the FPÖ home- page. The declaration was written with the intent to prove that the party is neither extremist nor racist nor antisemitic but supports the idea of an Austrian nation-state and democratic principles. The party has further decided to end financial support for the extreme-right publication Aula.

According to Liebhart, however, the Freedom Party has even built a commission of historians who investigate the party’s history in order to get rid of potential further issues. Tough this idea was welcomed in principle, the presentation of the steering group and the leading members of the planned commission raised serious doubts about their neutrality. Some of the leading figures have close ties to neo-Nazism and right-wing extremism. Anyway, Strache has also been criticized by FPÖ party members and various far-right “alternative” media outlets for his compliance with mainstream politics.

Neo-Nazism is also so effective among the Germany’s far-right populist Alternative for Germany (AfD) party, which is the third-largest group in the Bundestag despite it was formed in 2013. The AfD is not only the largest opposition party in the Bundestag, it has managed to get into the European parliament and all the state parliaments. According an article by Deutsche Welle (DW), the AfD’s main thrust was its opposition to bailouts of indebted EU member states like Greece. But over time, it has become, first and foremost, an anti-immigration party. The AfD completely rejects Chancellor Angela Merkel’s welcoming policy toward refugees, particularly from the Arab world, which saw more than 1.5 million migrants arrive in Germany since 2015.

The party wants to change Germany’s constitution to get rid of the right to an individual hearing in asylum cases and would seek to immediately deport all those whose applications to remain in Germany are rejected, regardless of whether the countries to which deportees are sent back are safe or not. It also advocates foreigners who commit crimes in Germany being sentenced to prisons outside the country.

The AfD also wants to seal the EU’s borders, institute rigorous identity checks along Germany’s national borders and set up holding camps abroad to prevent migrants from leaving for Germany in the first place. Although nominally favoring a targeted immigration policy along the Canadian model, lead candidate Alice Weidel has said the party wants to achieve “negative immigration” to Germany. It also argues that Germany is being “Islamified” and portrays itself as a bulwark for traditional Christian values.

According to DW’s article, AfD is generally regarded to be split between “moderate” and “far-right” wings, the latter of which seem to be gaining ground, shading over into racist nationalism and antisemitism. It is the Eastern States, the former GDR which reunited with West Germany in 1990, where the party is performing the strongest, polling over 20 percent. However, there is no absolute consensus about how to describe the AfD as a political phenomenon. As some analysts assesses AfD as a new home for neo-Nazism, some other commentators define it as a party of right-wing populism and the rise of the party as part of the same populist international trend that saw voters in the UK approve the Brexit referendum and Americans elect Donald Trump as president of the US.

Because of their neo-Nazism, the leaders of the party asked group members in March 2020 to cease activities of “The Wing”, a group inside the AfD, according to an article published by the New York Times. The country’s domestic intelligence service announced in March 2020 that it was monitoring the activist group within the organization — Der Flügel, or “The Wing” — as potential far-right extremists. National leaders of the party then voted to demand that The Wing dissolve. But its members have not been asked to leave the party, and its leaders, Björn Höcke and Andreas Kalbitz, remain in senior positions in two of the party’s state chapters.

The Wing, which is defined as neo-Nazi group, itself has an estimated 7,000 followers and constitutes about a fifth of the AfD’s total membership, but it has long commanded outsize attention, not least because of its members’ extreme views. Its Facebook page has more than 16,000 followers. Höcke, The Wing’s most visible leader, is a history teacher turned far-right ideologue with links to neo-Nazi circles. He is the author of a book demanding far-reaching changes to Germany’s postwar liberal democratic order, to be achieved through what he terms “temperate brutality.”

According to the NYT’s article, Kalbitz, the head of the party in the state of Brandenburg and another senior figure in The Wing, has previously acknowledged having belonged to groups close to neo-Nazis. Recently, however, his name was found on a membership list of the neo-Nazi group Heimattreue Deutsche Jugend as late as 2007, according to the German news media, a link that under the party’s rule book should have barred him from joining AfD.

“Neo-Nazism in an established democracy: The persistence of the Golden Dawn in Greece,” Antonis A. Ellinas, South European Society and Politics, 20:1, 1-20 (2015).