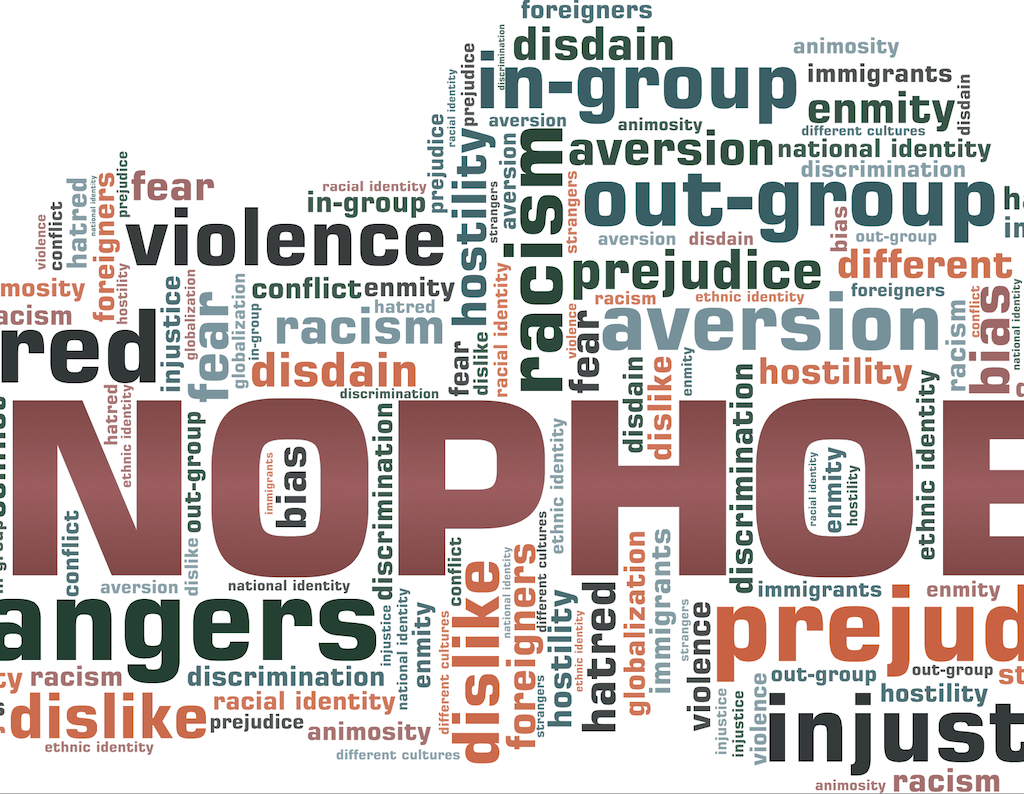 Xenophobia (from the Greek xenos, meaning ‘stranger’ or ‘foreigner’, and phobos, meaning ‘fear’) is the fear or hatred of that which is perceived to be foreign or strange. It is an expression of perceived conflict between an ingroup and an outgroup and may manifest in suspicion by the one of the other’s activities, a desire to eliminate their presence, and fear of losing national, ethnic or racial identity.

Xenophobia and racism often overlap but differ in that the latter is based on physical characteristics while the former is ‘based on the perception that the other is foreign to or originates from outside the community or nation’. A 1997 review article on xenophobia holds that it is ‘an element of a political struggle about who has the right to be cared for by the state and society: a fight for the collective goods of the modern state.’

According to an article by Richard A. Deangelis, the generic causes of xenophobic populism are widespread and, now they extend beyond a simple response to socioeconomic hardship, mass unemployment or uncontrolled migration. “In countries like France, Austria and Australia, which have overcome most major economic and security problems, other cultural and political factors have fostered resentment. The National Front, the Freedom Party and, in Australia, perhaps even Pauline Hanson’s One Nation, have assembled a durable, organised, hard core of supporters.

In an article by Veda Elizabeth Beltran, Thomas Greven quoted, right-wing populism is “based on a definition of the people as culturally homogenous” and the immigrants attempting integration in these western countries threaten the sense of ‘identity and common interests’ of the people. As these immigrants are fleeing from underdeveloped countries that are stricken with violence, it is very easy for Westerners to see themselves as superior. “As the West, we can often provide relief, help, or protection with numerous resources at our disposal. However, this also leads to an intensified belief in ethnocentrism amongst Westerners, which is believed to further ‘the xenophobic positioning against the other’,” she wrote.

According to Beltran, with ethnocentrism, xenophobic ideology is much easier to incite. She said, “Some examples can be seen in the rise and acceptance of Donald Trump in the US. In his initial announcement for the US presidency, Trump claimed that ‘When Mexico sends its people, they’re not sending their best… They’re sending people that have lots of problems, and they’re bringing those problems with us. They’re bringing drugs. They’re bringing crime. They’re rapists’. Furthermore, Trump called ‘for a total and complete shutdown of Muslims entering the US’. Such statements indicate little foresight or understanding of the ‘others’, as well as little to no willingness to comprehend or attempt further familiarization with the ‘others’. ”

According to a report by the European Commission against Racism and Intolerance (ECRI) released in 2018, xenophobic populism and racist hate speech continued to make their mark on the contemporary political climate in Europe. The report says that the growing public anxiety about economic, geopolitical and technological changes was exploited by those scapegoating migrants and minorities, in particular populist politicians aiming at dividing societies along national ethnic or religious lines. Not only were such views expressed by fringe politicians, but they increasingly gained footing within mainstream political parties and national governments.

“Ideologies based on assumed incompatibility between national/ethnic or religious groups present a danger to inclusive societies, as do those that advocate ‘racial superiority’,” the report says and warns against the threat of ‘us vs. them’ approach in political and public discourse. ECRI has also raised alarm about the increasing spread of ‘fake news’ often producing distorted images of vulnerable groups, and called on politicians, religious and community leaders to not only avoid using hate speech, but proactively counter it.

According to ECRI’s report, Islamophobia and anti-immigrant sentiment were still prevalent in most member states in 2018. Muslim women were frequently the targets of violence which often involved pulling off face veils and headscarves or being spat at. Persons of African descent who were born in Europe or have lived here for a long period of time already also faced increasing resentment. Moreover, Black people were often subject to racial profiling practices by law enforcement officials.

Inglehart, Ronald and Pippa Norris, 2017. “Trump and the Xenophobic Populist Parties: The Silent Revolution in Reverse.” Perspectives on Politics (June) 15 (2), 443-454.