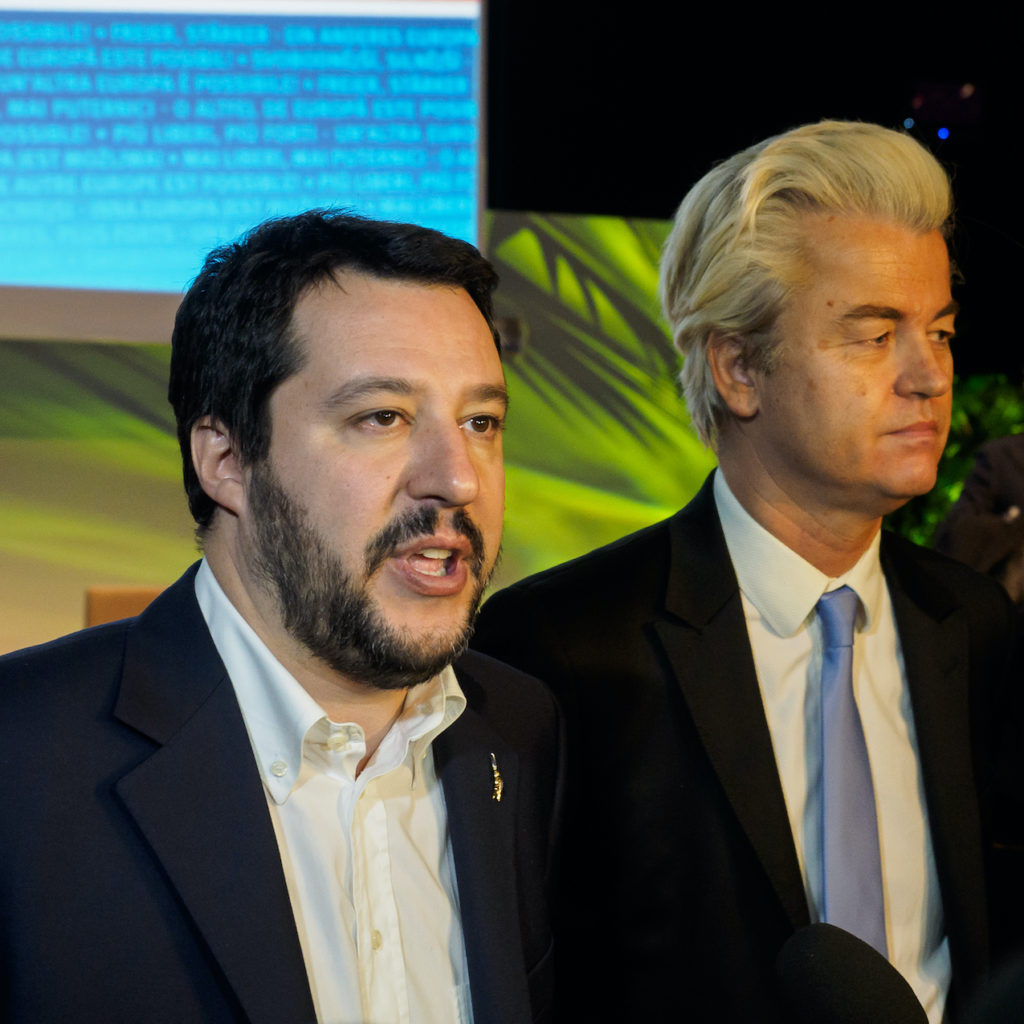 Secretary of Northern League, Matteo Salvini, and PVV leader, Geert Wilders are seen after the closing press conference of the first ENF congress at the MiCo center in Milano, January 29, 2016.

Racism is the belief that a particular race is superior or inferior to another, that a person’s social and moral traits are predetermined by his or her inborn biological characteristics. Racial separatism is the belief, most of the time based on racism, that different races should remain segregated and apart from one another. Racism has existed throughout human history. It may be defined as the hatred of one person by another — or the belief that another person is less than human — because of skin color, language, customs, place of birth or any factor that supposedly reveals the basic nature of that person. It has influenced wars, slavery, the formation of nations, and legal codes.

According to the article by ADL, during the past 500-1000 years, racism on the part of Western powers toward non-Westerners has had a far more significant impact on history than any other form of racism (such as racism among Western groups or among Easterners, such as Asians, Africans, and others). The most notorious example of racism by the West has been slavery, particularly the enslavement of Africans in the New World (slavery itself dates back thousands of years). This enslavement was accomplished because of the racist belief that Black Africans were less fully human than white Europeans and their descendants.

Racism may also mean prejudice, discrimination, or antagonism directed against other people because they are of a different race or ethnicity. Modern variants of racism are often based in social perceptions of biological differences between peoples. These views can take the form of social actions, practices or beliefs, or political systems in which different races are ranked as inherently superior or inferior to each other, based on presumed shared inheritable traits, abilities or qualities.

In terms of political systems (e.g., apartheid) that support the expression of prejudice or aversion in discriminatory practices or laws, racist ideology may include associated social aspects such as nativism, xenophobia, otherness, segregation, hierarchical ranking, and supremacism. United Nations convention on racial discrimination sees no distinction between the terms  “racial” and  “ethnic” discrimination. The UN Convention also underlines that superiority based on racial differentiation is scientifically false, morally condemnable, socially unjust and dangerous.

According to an article jointly written by Katy Brown, Aaron Winter and Aurelien Mondon, the populist hype has led to a dual process of euphemisation and legitimisation, whereby far-right parties are described in a less negative manner, allowing their ideas to spread more easily into mainstream discourse. The use of ‘populism’ instead of other more accurate but also negative descriptors has been core to this dual process. This choice has been at the expense of other well-studied terms such as far-right, radical-right or extreme-right. Perhaps most tellingly, it has been witnessed in both the media and parts of academia, a reluctance to use the term ‘racism’, despite the detailed work that sociologists in particular have done on the topic. They assert that “its avoidance has concealed, under less clear, politicised and stigmatising qualifiers, the real politics behind the reactionary movements and ideologies gaining ground in the societies.”

The article underlines that it is not surprising that the term has been openly embraced by some, with Marine Le Pen accepting the label ‘with a smile’, stating that: “If it means a government of the people, by the people and for the people, well then, I am a populist.” Similarly, the populist label facilitated claims by Nigel Farage that he was leading ‘the people’s army’ during the referendum campaign. Other examples of even more extreme euphemisation include the description of Tommy Robinson as an ‘anti-Islam activist’, Richard Spencer as a ‘dapper white nationalist’ and ‘Proud Boys’ founder Gavin McInnes as ‘a pariah’ due to ‘his disdain of PC culture’ rather than his white supremacism.

Xenophobic populism and racist hate speech continued to make their mark on the contemporary political climate in Europe, says an annual report of the European Commission against Racism and Intolerance (ECRI). According to the report, the various election campaigns in 2019 also showed that ultra-nationalistic, xenophobic, racist and homo-/transphobic hate speech was once again on the rise and increasingly permeates, and in many cases even sets the tone in, social media networks. Insulting and degrading remarks about members of minority groups that in the past would have been deemed unacceptable can now frequently be encountered on the Internet.

“Online content that challenges and threatens the overall principle of human dignity and equality also has a negative impact on discourse and behavior outside the digital sphere and in day-to-day life in general. Furthermore, the simplistic, confrontational and often non-factual style of debate in online fora and social media leads to increased polarization and inability to have a nuanced exchange of views in which different opinions are expressed in a respectful manner. This is especially problematic when it comes to certain contentious issues, such as migration, but also undermines the overall foundation of democratic discourse in society,” said ECRI’s report.

The link between racist narratives and the rhetoric of populist movements is often clear to the naked eye, according to an article by Ali Rattansi. He says right-wing national populism is a thoroughly racialised phenomenon. Not all those who support nativism would see themselves as racist, but the consequences of adopting a nativist stance draws one into territory that is certainly stained with racism.

Moreover, according to an article by Ulrike M. Vieten and Scott Poynting, right-wing racism has plunged into a more common populist project as an everyday phenomenon in numerous countries. “The previously banned or blamed extremist views of far-right parties and their racist programmes have entered the core of societies: this populism as the right of the ‘native’ and self-proclaimed ‘indigenous’ Christian Europe, for example, takes discourse and action onto the streets ‘fighting’ extremist fundamentalist Islam and claiming to ‘save our women’, particularly, if sexual violence against women is seen to be exercised by non-white and non-Christian men,” said the authors.

Meanwhile, Guno Jones argues against the grain of the conventionally accepted commonsense that the politics of racism are a surprising innovation in hitherto successfully multiculturalist, socially just and tolerant nation in the Nederlands. To him, the taken-for-grantedness of the privileging of white Dutchness in state immigration and citizenship policies needs to be challenged, argues Jones, if we are to understand the appeal of contemporary racist populism, such as that of Geert Wilders and the PVV. Vieten and Poynting also suggest that the rise of far-right racist populism is indeed resistible.

Toward a thoroughly cultural and discursive moral analysis of prejudice, discrimination, and racism. — Sullivan, G. B., 2016, In: Contemporary Psychology: APA Review of Books. 61, 13.