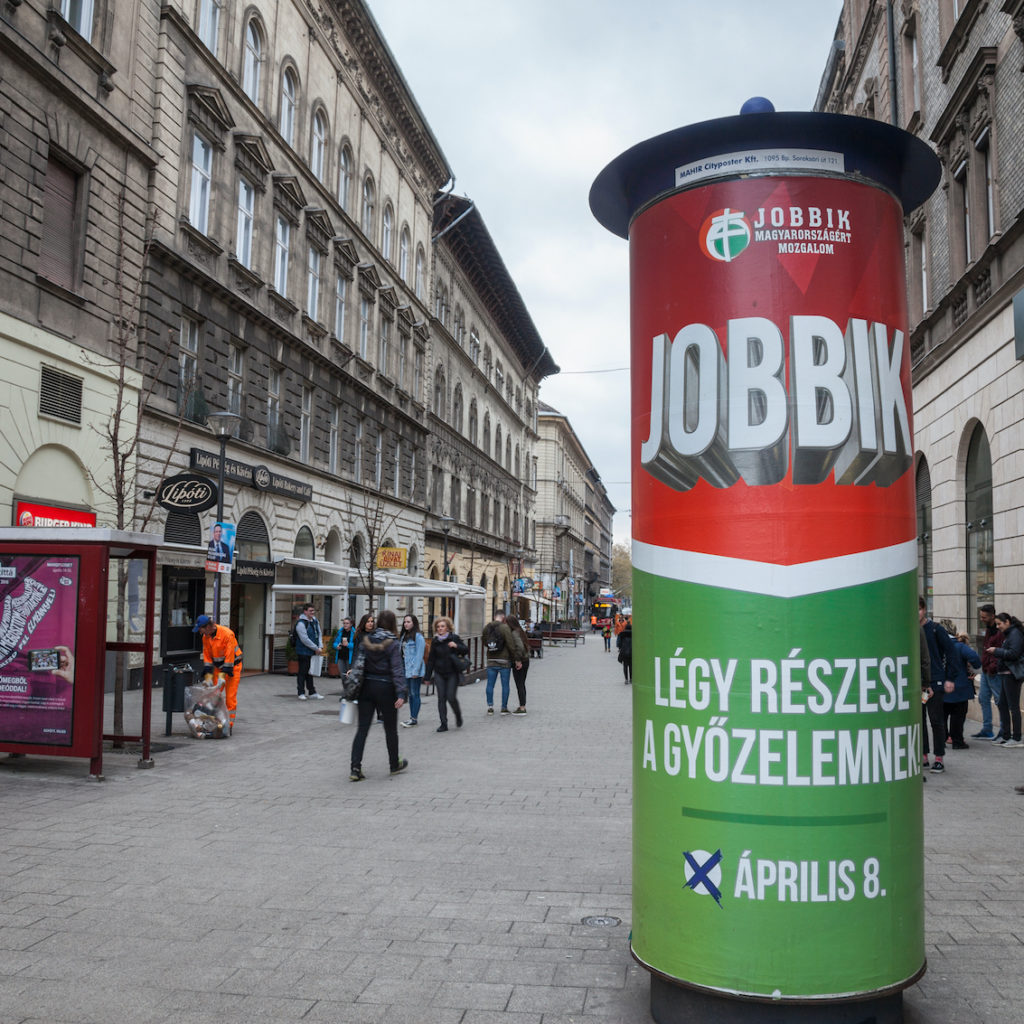 Hungary which has populists in both the government (Fidesz) and in the main opposition (Jobbik) is one of the best examples for populist democracies. Far-right main opposition party Jobbik's electoral poster seems in the streets of Budapest for the parliamentary elections of 2018.

Populist democracy refers to efforts to engage a higher proportion of the population more actively in the democratic process, such as through public referenda, and registering voters. According to an article by Takis S. Pappas, populist democracy indicates a situation in which both the party in office and at least the major opposition force(s) in a pluralist system are populist.

According to Pappas, the rise of populist democracies consists of a three-stage process, each stage involving specific mechanisms. Setting off from a state of nascent political liberalism (nature), those stages involve: i) the emergence of a relatively strong populist opposition party, ii) populism’s ascent to power and iii) populist contagion to other major parties. It will be shown that each stage is prompted by specific mechanisms that involve agency, the production of new symbols, specific electoral strategies and structural constraints. Significantly, the path from political liberalism to populist democracy allows for contingency as, at each stage, the return to original liberalism is always a likely outcome.

On the other hand, in an article, Peter Mair draws a distinction between ‘populist/popular democracy’ and ‘constitutional democracy’, the two pillars on which the legitimacy and effectiveness of democratic regimes rest. The populist democracy pillar is identified with an emphasis on the role of the demos that is, the free association of citizens, the maintenance of free elections, and the freedom of political expression. Popular democracy entails government by the people.

According to Mair, the constitutional pillar, on the other hand, is identified with an emphasis on the institutional requirements for good governance — the establishment of rules and constraints limiting executive autonomy, the guaranteeing of individual and collective rights, and the maintenance of a system of checks and balances intended to prevent the abuse of power. The constitutional pillar may be associated with the defense of the public good, entailing government for the people.

Mair states that populism may also be seen as integral to a form of democratic governance which operates without an emphasis on party. The core of this minimal definition posits a relationship between voters and government that is unmediated. In other words, and in the first place, populist democracy tends towards partyless democracy. Representation is not assured through party competition and competing interests are not recognized through competing party programmes.

To Mair, populist democracy in this sense assumes no fundamental clash of interests between different sectors of the electorate: voters are citizens first, and only later, if at all, are they workers, employers, farmers, women, immigrants, or whatever. “The people, in this sense, are undifferentiated, and that is the second key element of the minimal definition of populism employed here,” writes Mair and adds that “appeals are directed to the voters at large, or to the people, and not to particular groups that are differentiated by status or belief.”

In this system, according to Mair, an absence of conflict is assumed. Whether formally organized by party or not, the government that emerges in such a democracy therefore has a duty to serve all of the people rather than just some of the people. This, then, final element of this particular sense of populism: the government serves the national interest, the popular interest, rather than any sectional interest. It serves as an administrator, seeking the best solutions available on the basis of objective criteria, thus rejecting the assumptions involved in conceptions of party democracy and party government.

Seen in these very minimal terms, Mair says, this sense of populism may seem nothing novel. Even beyond the cases cited most frequently in discussions of populism, for example, and most especially in Latin America, such orientations can also be associated with Gaullism in the early years of the French Fifth Republic; or with the British Conservative Party even before the halcyon days of Margaret Thatcher; or with the long-term appeals articulated by the dominant Fianna Fáil party in Ireland… Whereas populism in the most modern variant is advanced in the context of diminishing the role of parties as such, the populism of this one-nation conservatism was advanced in order to challenge the appeal of particular parties, especially those on the left, and to enhance the appeal of others.