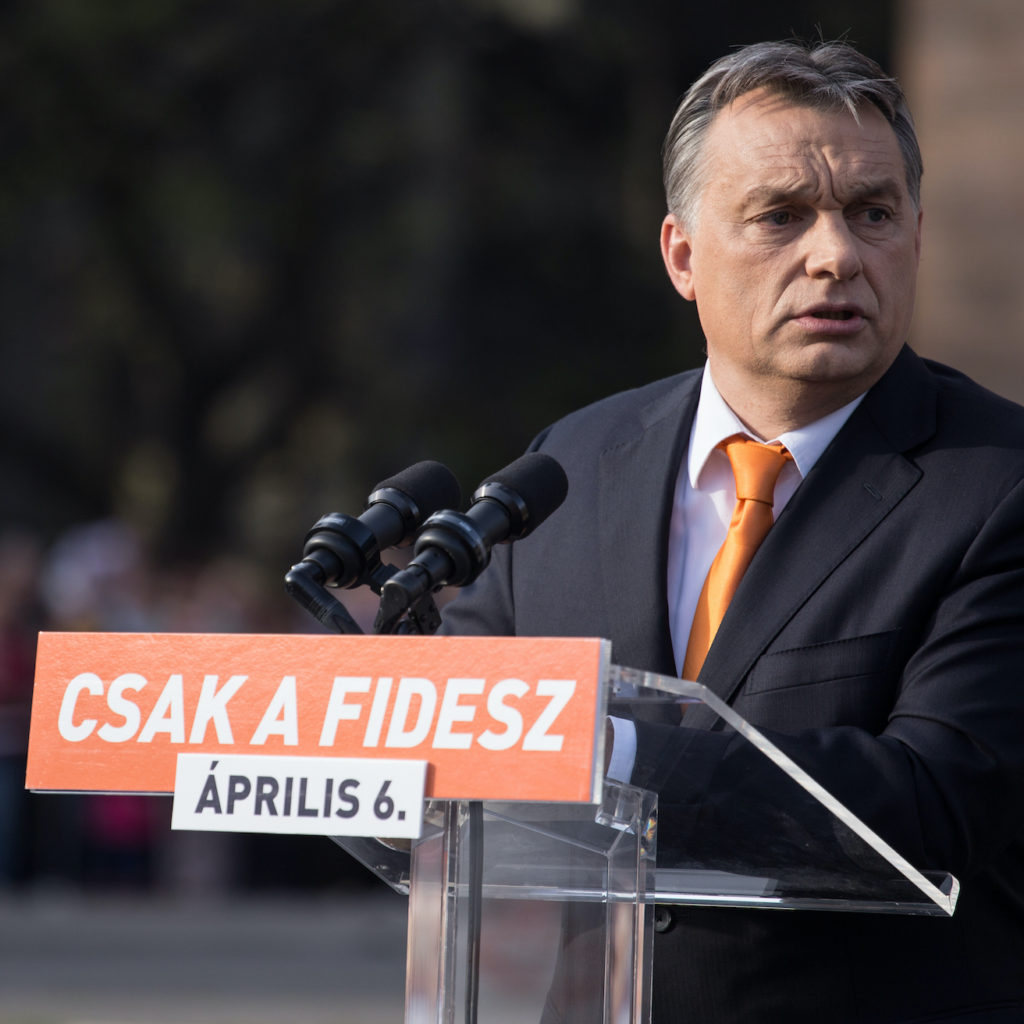 Hungarian Prime Minister Viktor Orbán gives a speech to convince his respondents in Szeged on March 4, 2014.

Hybrid regimes are nations with regular electoral frauds, preventing them from being fair and free democracy. These nations commonly have governments that apply pressure on political opposition, non-independent judiciaries, widespread corruption, harassment and pressure placed on the media, anemic rule of law, and more pronounced faults than flawed democracies in the realms of underdeveloped political culture, low levels of participation in politics and issues in the functioning of governance.

A hybrid regime can also be named as illiberal democracy, partial democracy, low intensity democracy, empty democracy or guided democracy. It is a governing system in which although elections take place, citizens are cut off from knowledge about the activities of those who exercise real power because of the lack of civil liberties; thus, it is not an “open society”. There are many countries “that are categorized as neither ‘free’ nor ‘not free’, but as ‘probably free’, falling somewhere between democratic and nondemocratic regimes”. This may be because a constitution limiting government powers exists, but those in power ignore its liberties, or because an adequate legal constitutional framework of liberties does not exist.

Hybrid regimes are also called as anocractic regimes. These regimes are unique in the sense they are not democracies. Instead, anocratic regimes are dictatorships with a democratic institution of legislature. They possess a mixture of both democratic and autocratic attributes which can lead to an increase in conflict within the nation. These types of regimes can exist as long as the ruling elite avoid severe rights abuses and do not steal or cancel elections. Another key to these regimes existing and not crumbling is the ruling regime making sure the rights abuses are not well publicized which would lead to more stir among the people they are ruling over. Cuba, for example, is an anocratic regime.

Western researchers analyzing hybrid regimes pay attention to the decorative nature of democratic institutions (elections do not lead to a change of power, different media broadcast government point of view, the “opposition” in parliament votes the same way as the ruling party, etc.), from which it is concluded that authoritarianism is the basis of hybrid regimes, however, hybrid regimes also imitate dictatorship, while having a relatively lower level of violence.

The third wave of democratization has led to the emergence of hybrid regimes that are neither fully democratic nor fully authoritarian. Neither the concept of illiberal democracy, nor the concept of electoral authoritarianism fully describes these hybrid regimes. Since the end of the Cold War, such regimes have become the most common among undemocratic. At the end of the process of transformation of authoritarian regimes, when liberalization occurs, limited elections appear in one way or another, liberal democracy has always been assumed, while in practice, this process basically froze “halfway”.

In relation to regimes that were previously called “transitional” in the 1980s, the term “hybrid regime” began to be used, which was strengthened because, in the words of Thomas Carothers, the majority of “transitional countries” are neither completely dictatorial nor aspiring to democracy, and by and large they cannot be called transitional. They are located in the politically stable gray zone, changes in which may not take place for decades. Thus, he stated that hybrid regimes must be considered without the assumption that they will ultimately become democracies. These hybrid regimes were called semi-authoritarianism or electoral authoritarianism.

Signs of a hybrid regime according to Guillermo O’Donnell, Philippe C. Schmitter, Larry Diamond, Thomas Carothers: i) The presence of external attributes of democracy; ii) Low degree of representation of the interests of citizens in the process of political decision-making; iii) Low level of political participation; iv) The declarative nature of political rights and freedoms (formally there is, in fact, difficult implementation); v) Low level of trust in political institutions by citizens.

Hybrid regimes—somewhat less common in the twentieth century—have proliferated worldwide in the 2000s. During the Cold War, the world was split largely in two camps: full-fledged democracies, mostly in the North Atlantic and a few in Asia, and autocracies, mostly in the East and the South. For a while in the 1990s, during the heyday of the so-called third wave of democracy, the balance seemed to shift in the direction of more democracies. But since early in the new century, the trend has been toward hybrid regimes. Many of these regimes—either former democracies, such as Venezuela, or former autocracies, such as Russia—have moved toward an “in-between” position, a “gray zone” in which rulers introduce autocratic practices without totally abolishing democratic institutions, particularly free elections.

According to Henry Hale, 32 percent of all countries in 2008 could be considered hybrid and that many of them have been stable and long-lasting, which challenges the notion that democratic transitions and consolidations are inevitable. Populism also serves for sake of hybrid regimes thanks to its effort to undermine checks and balances on the main leader. The personalization of politics that is inherent in populism implies, almost by definition, that there must be an equal process of deinstitutionalization of intermediary institutions. This deinstitutionalization translates into an erosion of checks and balances.

According to an article by Neil Robinson and Sarah Milne, hybrid regimes like electoral authoritarianism blend elements of democratic and non-democratic political practices. To authors, hybrid regimes can develop from populism or can themselves develop populism to explain and justify their democratic shortcomings. Where the latter occurs, populism is a tool of regime stabilization rather than a form of ‘populism in power’. “Moving from using some populist themes to assist regime stabilization to official populism requires the development of populist discourse to a point where it becomes definitional of what constitutes the relationship between state and society,” wrote Robinson and Milne.

Saying that since hybrid regimes have regular elections and the opposition is able organize itself politically, the degree of repression will be less than in the case of dictatorships, Dalibor Rohac urges that “The reason why hybrid regimes get away with some repression has to do with the populist character of their leaders… Repression is feasible because a populist leader will pander systematically to his or her base, ignoring the rest of the electorate. The more extreme the strongman/woman’s position, the larger the number of ‘enemies’ to whom he/she can point. That is borne out by the experience of Hungary and Poland where the first Fidesz and Law and Justice-led governments (1998-2002 and 2005-2007, respectively) displayed very little of the radicalism seen in both countries today.”

According to Rohac, a hybrid regime’s repressiveness is also linked to economic performance. Specifically, there is a “positive relationship between repression and economic performance or other things that make the lives of the citizenry better. As with a totalitarian, the more things improve, the more repressive the regime becomes.”