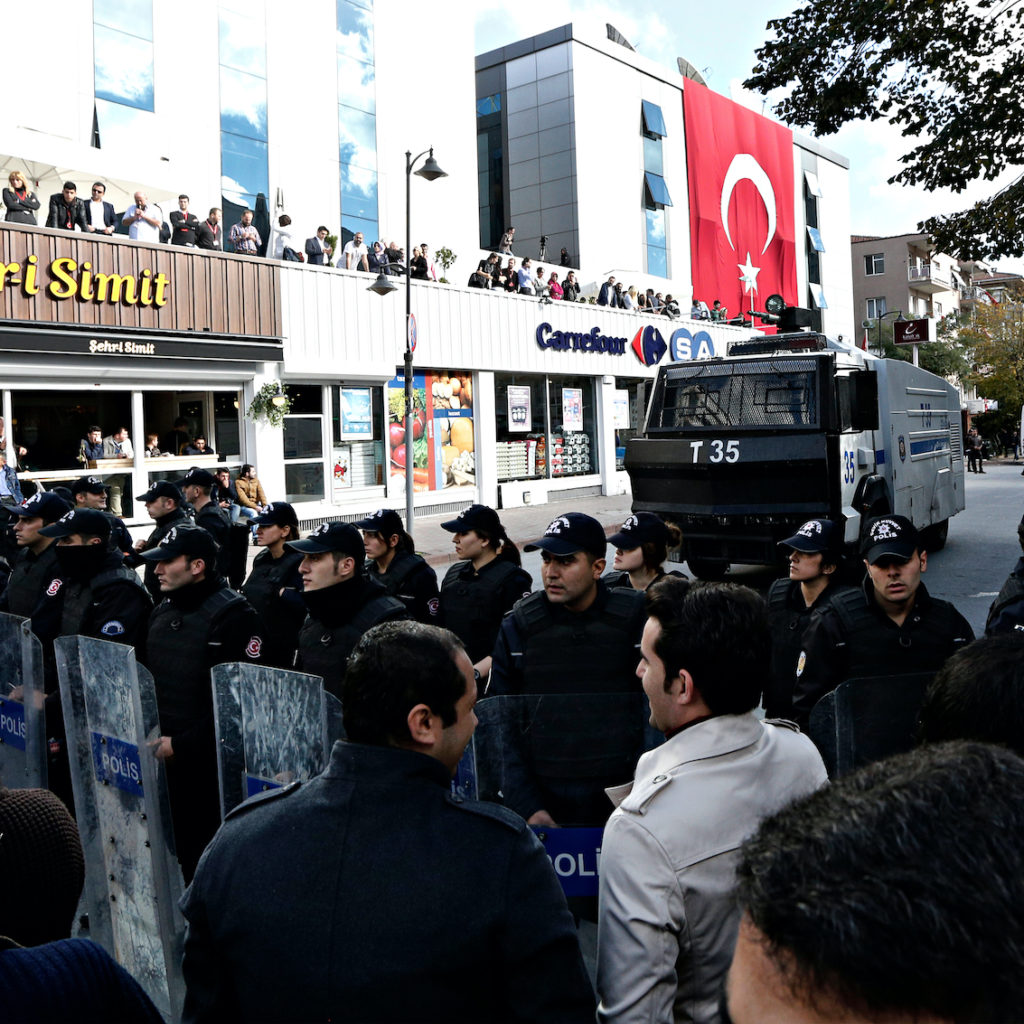 Turkish riot police bloc protesters as they surround the headquarters of a Ipek Media Group linked to a Erdogan regime critic, enforcing a court order to seize the media outlets, in Istanbul October 28, 2015.

It is frequently heard in politics, usually referring to perceived redistributions from those who have more to those who have less. Occasionally, however, it is used to describe laws or policies that cause opposite redistributions that shift monetary burdens from wealthy to low-income individuals. The phrase can be emotionally charged and used to exaggerate or misconstrue the motivations of opponents during political debates.

For example, if an individual politician calls for increased taxes on higher income individuals, their sole focus may be to raise funds for specific government programs, tapping the largest available sources while realizing that low-wage workers have little or no excess income to draw tax revenues from. Political opponents might argue that this politician’s prime motivation is to redistribute wealth, when redistribution is not their goal. The phrase is often coupled with the term ‘class warfare,’ with high income earners and the wealthy portrayed as victims of unfairness and discrimination.

According to a book jointly written by George M. Guess and Lance T. LeLoup, left-wing populist regime ideologies predictably are redistributionist and state socialist with strong practical interests in public program financing through direct expenditures, fiscal transfers, debt, and radically progressive changes in the tax code. They said “Populist programs have been financed historically by natural resource exports such as minerals and timber and now increasingly petrodollars. These have been the major sources of financing for expanded redistributionist programs (e.g., Bolivia, Venezuela and Ecuador).”

The confiscation of massive private properties by Erdogan regime in Turkey could be showed as a kind of redistributionist populism by using state power. A survey revealed that the Erdogan regime has transferred about $11 billion to the Savings Deposit Insurance Fund (TMSF) from the assets of 1,124 companies seized over their alleged links to the Gulen movement under a crackdown that began following a controversial coup attempt in July 2016. The figure did not include 127 people whose assets were also seized and dissolved entities, such as private universities, hospitals and media outlets, which would bring the total to $22 billion.

Apart from seized assets, according to the survey, as of June 4, 2018, 4100 profit-oriented or non-profit legal entities were dissolved, and their assets were confiscated under decree laws without any judicial procedure. Erdogan regime used government decrees and trustees to confiscate those assets. The regime has seized companies including Koza, Boydak, Dumankaya, Akfa, Orkide, Sesli and Naksan that were among the largest 500 firms of Turkey. According to the survey, the companies were conducting business in every aspect of economy and trade including mining, gasoline distribution, automotives, home textiles, jewelry, pharmacies, hardware, home decor and information technologies.

Christian Houle and Paul D. Kenny stated in an article that some quantitative research suggests that populist rule of the “new left” may be positively associated with redistribution, although it remains disputed whether the populist or social democratic left have in fact achieved greater gains. According to them, the notion that the more plebiscitary a regime the more it should favor the interests of the poor is a standing intuition in political economy going back to classical thought. “Looking to mobilize the common people against an elite that’s usually portrayed in oligarchic terms, it stands to reason that populists should be exercised to redistribute wealth and income to the lower social orders when in power,” they underlined.

According to the article, if the state is free to confiscate or interfere with the property of citizens, the latter’s freedom is greatly eroded. “At the very least, citizens could be silenced in their criticism of government for fear of losing their means of living. Although confiscatory levels of taxation on income or inheritance inhibit individual autonomy with respect to property, so long as the rules regarding such taxes are applied equally across the citizenry regardless of political connections, they are not said to be interfering with the rule of law,” they claim.

It is generally expected that at least left-wing populist rule would be associated with higher levels of redistribution than that of other governments and hence a reduction in socioeconomic inequality. Contrary to this expectations, Houle and Kenny find that populist rule is not associated with greater redistribution than non-populist democratic rule. This is the case irrespective of whether they compare populist rule to that of the social democratic left (as they might expect) or to that of non-left democracies.

“That populist rule should bring about less redistribution than other democracies is surprising and greatly undermines the case for the popular support of populist campaigners,” they said and added that “the most surprising result probably concerns the lack of redistribution even among left-leaning populists. This may be partly explained by the indirectly negative effects of populist rule on economic growth.”