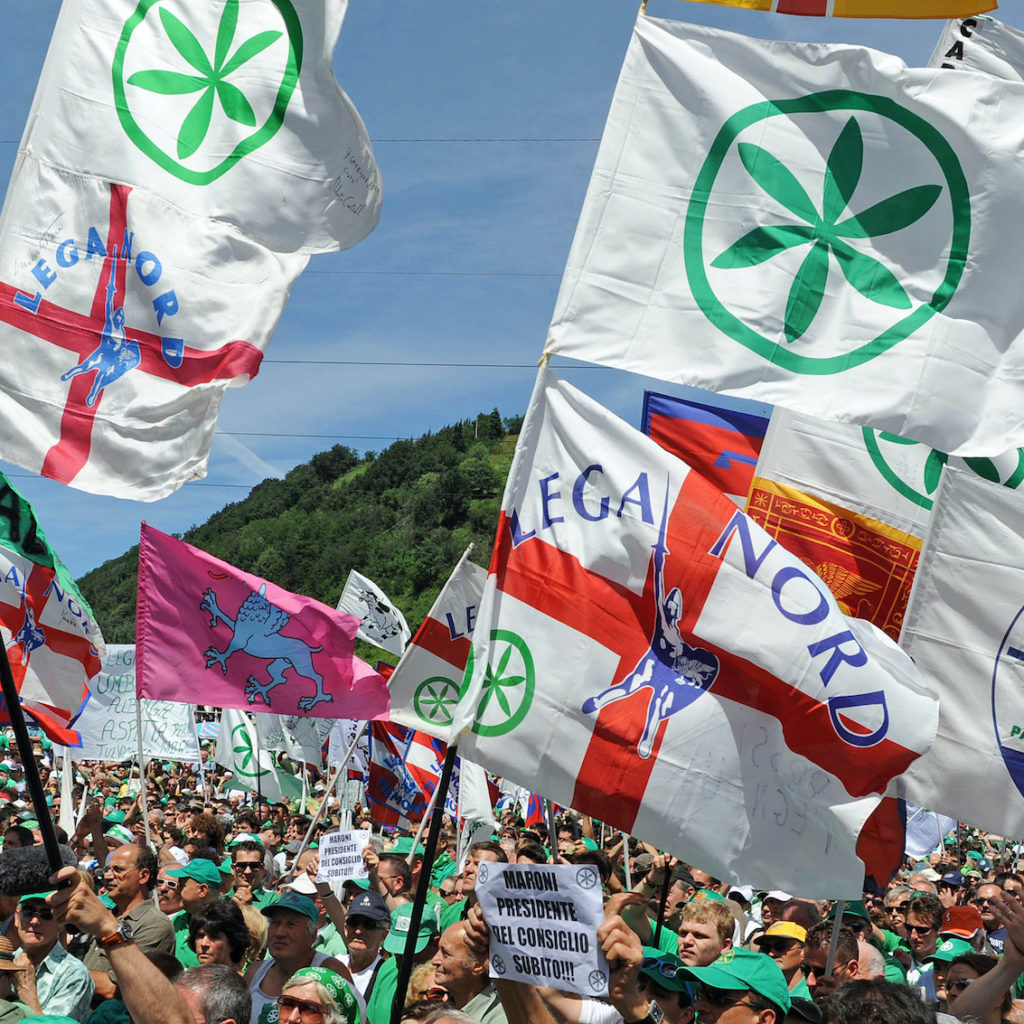 Lega Nord held a rally as part of its electoral campaign in Pontida, Italy on March 1, 2018.

Regionalism can be defined as a thin ideology that politicizes the specificities of the population living in a certain sub-state region vis-à-vis the population of the state as a whole, according to an article collectively written by Reinhard Heinisch, Emanuele Massetti and Oscar Mazzoleni. To the authors, these specificities, which can be socio-cultural (language, religion, prevailing ideological orientations, etc.) and/or socio-economic (type and level of economic development, prevalent economic sectors, economic status of the region vis-à-vis the rest of state, etc.), are seen as the bases of a separate ethno-territorial identity which should be formally recognized and accommodated by the state.

In other words, regionalism is a political ideology focusing on the “development of a political or social system based on one or more” regions and/or the national, normative or economic interests of a specific region, group of regions or another subnational entity, gaining strength from or aiming to strengthen the “consciousness of and loyalty to a distinct region with a homogeneous population”, similarly to nationalism. More specifically, “regionalism refers to three distinct elements: movements demanding territorial autonomy within unitary states; the organization of the central state on a regional basis for the delivery of its policies including regional development policies; political decentralization and regional autonomy”.

Regions may be delineated by administrative divisions, culture, language and religion, among others. Regionalists aim at increasing the political power and influence available to all or some residents of a region. Their demands occur in “strong” forms, such as sovereignty, separatism, secession and independence, as well as more moderate campaigns for greater autonomy. Strictly, regionalists favour confederations over unitary nation states with strong central governments. They may, however, embrace intermediate forms of federalism.

As a subtype of nationalism, regionalism (or minority nationalism) can be defined as a thin ideology which politicizes a specific regional identity vis-à-vis the host state, claiming some kind of territorial self-government for the region, says Emanuele Massetti in an article. Regionalist parties are, according to Massetti, indeed, defined by their focus on self-government claims, which makes them appear, at least initially, as single issue or niche parties. However, empirical research has repeatedly shown that, in fact, they tend to develop a broader ideology by borrowing ideas and discourses from other (thin and macro) ideological traditions. In particular, since the thin ideology of regionalism can be linked with (or hosted by) both leftist and rightist ideological traditions.

The ‘thinness’ of populism allows it to adapt to the different contexts in which it develops. Therefore, like regionalism, populism does combine with other ideologies and can take both a leftist or rightist colour. Political parties can, therefore, create specific blends of regionalism and populism that, combined with (segments of) other ideologies, would take a right-wing or left-wing (or neither left nor right) colour. While several works have already studied right-wing regionalist populist parties, such as the Lega Nord, the Lega dei Ticinesi and the Vlaams Belang, Massetti’s article focuses on two cases of left-wing regionalist populism.

In international relations, regionalism is the expression of a common sense of identity and purpose combined with the creation and implementation of institutions that express a particular identity and shape collective action within a geographical region. Regionalism is one of the three constituents of the international commercial system along with multilateralism and unilateralism.

The first coherent regional initiatives began in the 1950s and 1960s, but they accomplished little, except in Western Europe with the establishment of the European Community. Some analysts call these initiatives “old regionalism”. In the late 1980s, a new bout of regional integration (also called “new regionalism”) began and continues still. A new wave of political initiatives prompting regional integration took place worldwide during the last two decades. The European Union can be classified as a result of regionalism. The idea that lies behind this increased regional identity is that as a region becomes more economically integrated, it will necessarily become politically integrated as well.

According to an article by Izet Ibreljić, Salih Kulenović and Amra Kožarić, contemporary European concept of regionalization is treated as a project of socio-economic decentralization, which has to be based on democracy and the rule of law. In doing so, long term costs were lower than revenue. However, interest in regionalization can be an expression of the political elite in order to secure its political and economic premiership. In this case it often takes no account of improving the standard of regional population, but about achieving personal goals on the political plane-retaining or gaining power. Treated populist regionalism in modern European countries usually manifests itself in more or less inflating ethno-regional tendencies.

Joseph Nye defined an international region as “a limited number of states linked by a geographical relationship and by a degree of mutual interdependence”, and international regionalism as “the formation of interstate associations or groupings on the basis of regions”. However, Ernst B. Haas stressed the need to distinguish the notions of regional cooperation, regional system, regional organization and regional integration and regionalism.

On the one hand, Emanuele Massetti draws attention in an article to the fact that populism is not an exclusive feature of state-wide and/or majority nationalist parties. Regionalist parties can also develop a populist discourse either as a stable and defining characteristic or at specific times and under particular conditions. On the other hand, in an article George Newth focuses on the connection between regionalism and radical-right ideology by examining the roots of the Italian Lega Nord’s regionalist, populist and nativist discourse with a new framework of populist regionalism. By analysing the discourse of two waves of regionalist activism in Lombardy and Piedmont, represented respectively by movements for regional autonomy (MRAs) and the Lega Nord (Northern League), Newth underlines a significant connection between populist regionalism and the radical right, represented by the process of Othering directed against both internal and external migrants.

Meanwhile, according to an article by Oscar Mazzoleni, the strength with which the regionalist populist dichotomy is used may depend on various factors: from the compatibility/incompatibility between the regional and nation-state identity to the intensity of a regionalist struggle against the nation-state. For instance, a high-intensity struggle such as that pursued in Catalonia is supported by a strong regionalist populist dichotomy that aims to delegitimize the Spanish elites and institutional processes while legitimizing the unilateral decisions taken by the Catalan people and their regional representatives.

Mazzoleni writes that regionalist populism (or populist regionalism) becomes more evident, however, when populist discourse serves not only in a regionalist struggle, but also in other important policy areas in which there appear to be crucial disparities between the preferences of the regional people and the policies imposed on them from the nation-state’s central institutions, especially if all state-wide parties appear to converge on these policies.

Clear examples of this type of broader synergy, according to Mazzoleni, can be found in the right-wing anti-immigrant populism practiced by the Belgian VB since the 1980s or the Italian Lega Nord and Swiss Lega dei Ticinesi since 1990s, and the left-wing anti-austerity populism of SNP and Plaid Cymru in recent years in the UK. Regionalist parties, which were once considered to be single-issue parties, have extended their ideological outlooks and discourse beyonde their core concerns.

Claiming Regionalism and Nationalism at the same time: How the Italian and Swiss Leagues can engage in contradictory Claims and get away with it; Mazzoleni Oscar, Ruzza Carlo, 2020. pp. 64-86 dans Heinisch Reinhard, Massetti Emanuele, Mazzoleni Oscar (eds.) The People and the Nation. Populism and Ethno-Territorial Politics in Europe, Routledge. [serval:BIB_EC588B6C533F]

No regionalism please, we are Leghisti!’. The transformation of the Italian Lega Nord under the leadership of Matteo Salvini — Daniele Albertazzi, 3 Sep 2018, In: Regional and Federal Studies.