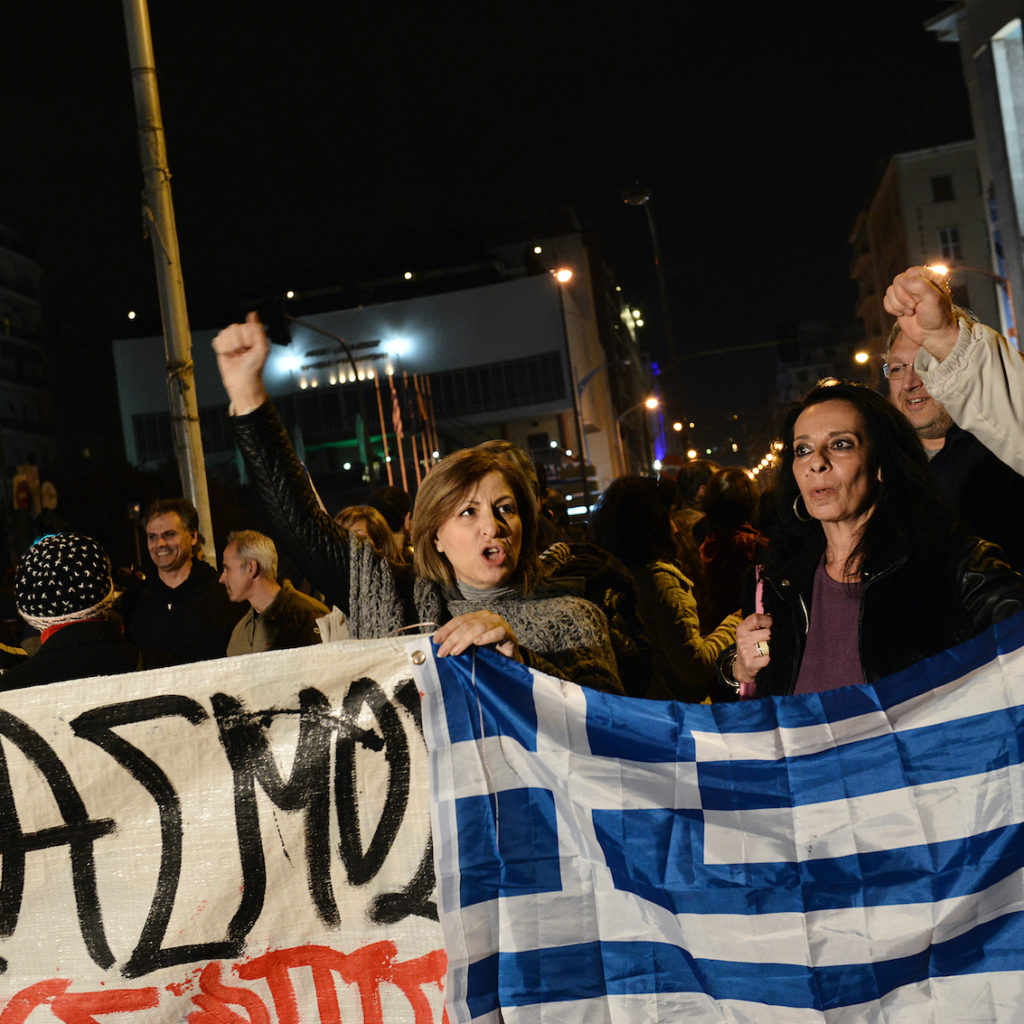 People in Thessaloniki hold a Greek flag during an anti-austerity rally on February 5, 2015. Thousands people took to the streets after the European Central Bank tightened bank limits.

The anti-austerity movement refers to the mobilization of street protests and grassroots campaigns that has happened across various countries, especially in Europe, since the onset of the worldwide Great Recession. Anti-austerity actions are varied and ongoing and can be either sporadic and loosely organized or longer-term and tightly organized. The global Occupy movement has arguably been the most noticeable physical enactment of anti-austerity and populist sentiment.

Since the onset of the economic recession in Europe, the political establishment response has increasingly focused on austerity: Attempts to bring down budget deficits and control the rise of debt. The anti-austerity movement has responded by giving rise to a wave of anti-establishment political parties. Opposition to austerity is seen as the force behind the rise of Podemos in Spain, Italy’s Five Star Movement (5SM) and the Syriza party in Greece. Ahead of the Scottish independence referendum in 2014, the Scottish Government pledged to end austerity in an independent Scotland. Podemos is as a left-wing populist party with rhetoric also rooted in anti-austerity and anti-establishment views. Podemos has called for a re-negotiation of austerity measures and seeks to curtail the Treaty of Lisbon. As written by Jon Henley in an article that the anti-austerity of Podemos took 21 percent in 2015 just a year after the party was founded.

According to a study conducted by Evelyne Hübscher, Markus Wagner and Thomas Sattler,  most party systems have seen a rise in political polarization and populism during the past decades. Their study shows that austerity policies significantly contributed to this development. Their analysis of 170 elections since 1980 finds that austerity, political polarization and the rise of populism are strongly related, especially if a left government implemented austerity policies.

The survey shows why this is the case: If a right-wing government implements austerity, voters dissatisfied with government policies mostly turn to the main opposition party on the left. In cases where a left-wing government implements austerity, however, dissatisfied voters turn towards non-mainstream, populist parties or abstain from voting because the main, traditional opposition party on the right does not provide a credible anti-austerity alternative. Therefore, austerity can have profound and lasting effects on party systems as it tends to strengthen parties at the fringes of the ideological spectrum and gives rise to populist challenger parties.

As it was stated in an article by Daphne Halikiopoulou, in January 2015, Greece elected a government with a clear anti-austerity mandate, consisting of a radical left-radical right coalition between Syriza and Anel. “Syriza won the election on a left-wing populist narrative that attributed blame to outside exploitative powers and their collaborators and sought to restore sovereignty back to the Greek people,” she wrote and added that “Anel received 4.8 percent of the vote by also campaigning on a populist platform. Syriza and Anel shared a populist narrative based on their anti-austerity stance. Their rise is indicative of the rise of a type of populism in Greece that was adopted by most parties in the system in an attempt to divert political accountability through populist blame-shifting.”

Meanwhile, Rosa Pavanelli underlines in an article that there are fears everywhere that the tidal wave of extreme right-wing movements will swell, with Brussels being blamed for austerity policies, and thus for recession and unemployment. “This situation has led to an explosion in the rejection of foreigners and refugees, and to a demand, by a large part of the European population, for xenophobic and authoritarian policies,” she wrote and continued “Demanding budget cuts, which in practice have a direct impact on public services including healthcare and education, is the bedrock of populism, authoritarianism or social unrest.”

On the other hand, according to an article collectively written by Sarah Robinson and Alexandra Bristow, whilst populism in general has been on the rise since the 1960s, Europe and the US have now come under an unprecedented sway of a new right-wing form known as ‘heritage’ populism, which emphasizes the nativist preservation of material and cultural heritage and is characterized by ‘unbridled demagoguery, xenophobia, condemnation of the elite, and stigmatizing rhetoric’. They stated that this form of populism is said to exploit and be fueled by anger and anxiety of those most disadvantaged by the West’s growing economic inequality in the context of globalization and neoliberal austerity policies.