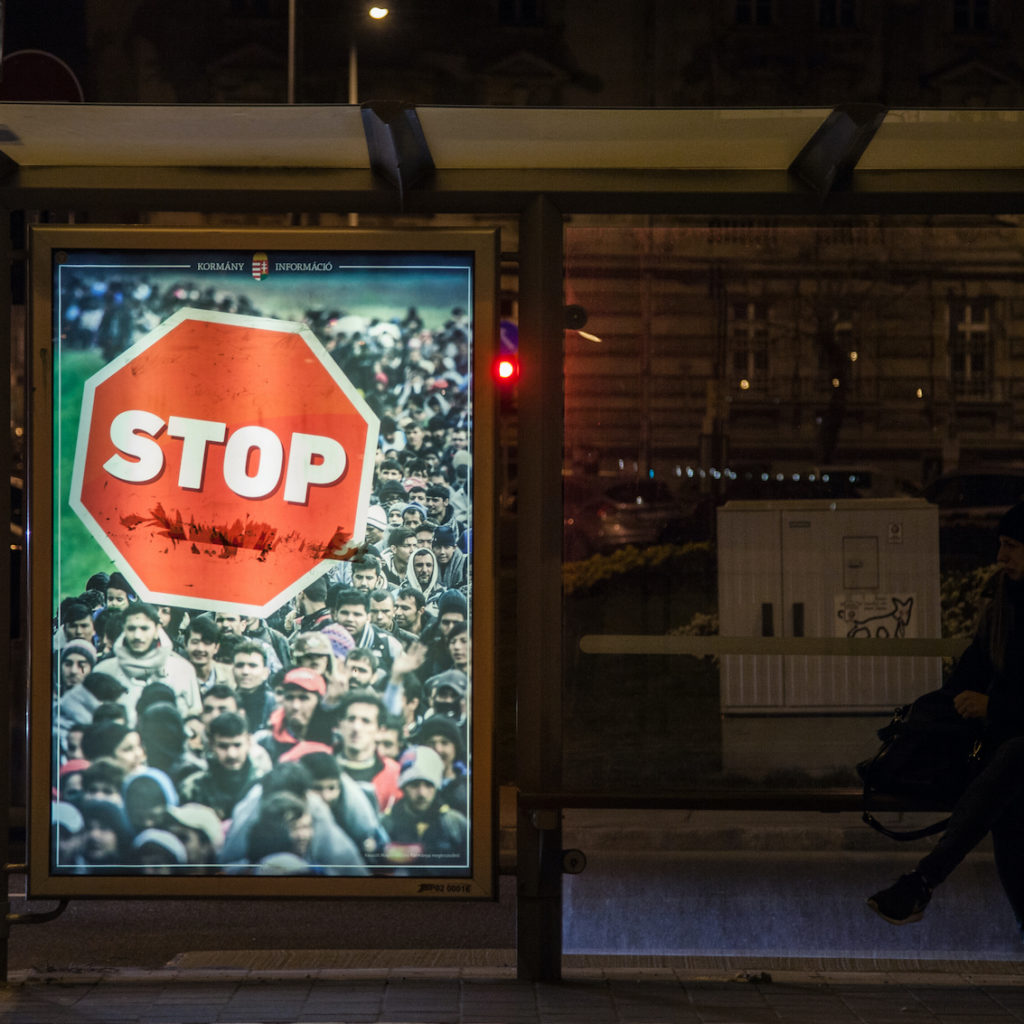 Anti Immigration poster from Viktor Orban government in the streets of Budapest during the 2018 general elections campaign.

According to an article by Hajo G. Boomgaarden and Rens Vliegenthart, anti-immigrant populism is on the rise throughout western Europe. “Traditionally, economic and immigration-related factors are used to explain support for anti-immigrant parties at the aggregate level,” they said and continued “Some critics of immigration argue that the presence of immigrants may distort the national identity of the native population. That means that the native population opposes immigration because they fear they may lose their sense of belonging to their own nation, as represented by distinctive traditions, culture, language and politics.”

Migration crises, and the chaos they engender, can also bolster support for populist radical-right and anti-immigration platforms, says Martin Schain in a report titled “Shifting Tides: Radical-Right Populism and Immigration Policy in Europe and the United States”. The report states that the electoral breakthroughs and success of European parties that campaign on such platforms long predate the recent migration crisis, but the pace and scale of arrivals in 2015 and 2016 fueled a radical-right discourse of borders being out of control and dangerous immigrants entering without proper vetting. Some other excerpts from the report are as follows:

“The success of the German far-right party Alternative for Germany (AfD) in September 2017 and the Austrian Freedom Party (FPÖ) a month later was directly related to a hardening of views by voters on both the right and the left in light of the refugee crisis. In Austria, the largest parties on the right gained votes, while those on the left either lost votes (the Greens) or barely held their own (the Social Democrats). The FPÖ, which entered government for the first time in ten years, captured a number of key ministries. In Europe, the 2015–16 migration crisis not only strained migration-management and asylum institutions, it also posed a more existential challenge to European integration.

“Feelings of insecurity linked to migration have been underpinned by a series of terrorist attacks in Europe and the US. In fact, very few of these attacks were perpetrated by asylum seekers, or by jihadists (13 out of 142 classified by Europol in 2016). Nevertheless, some high-profile attacks, such as the November 2015 attacks in Paris, were carried out by people with an immigration background, heightening concerns about integration and the vulnerability of some first- and second-generation immigrants to radicalization. The fear of future attacks remains high and is played upon by some politicians with populist radical-right views.

“Trust in politicians and institutions has been decreasing across Europe is not the fault of populist radical-right parties, but rather a symptom of broader societal trends that encourage their support. Established politicians may need to do some potentially painful soul-searching to (re-)connect with their modern base. A whole-of-society approach must also include a commitment to uprooting prejudicial attitudes and fighting discrimination in the workplace, housing, education, and other key social areas by putting sufficient resources and political support behind antidiscrimination campaigns and programs.”

Meeusen, C. (2014). The parent-child similarity in cross-group friendship and anti-immigrant prejudice: A study among 15-year adolescents and both their parents in Belgium. Journal of Research in Personality, 50 (1), 46-55.

Continuity and change in anti-immigrant discourse in Italy: An analysis of the visual propaganda of the Lega Nord — JE Richardson, M Colombo; Journal of Language and Politics, 2013, 12 (2), 180-202