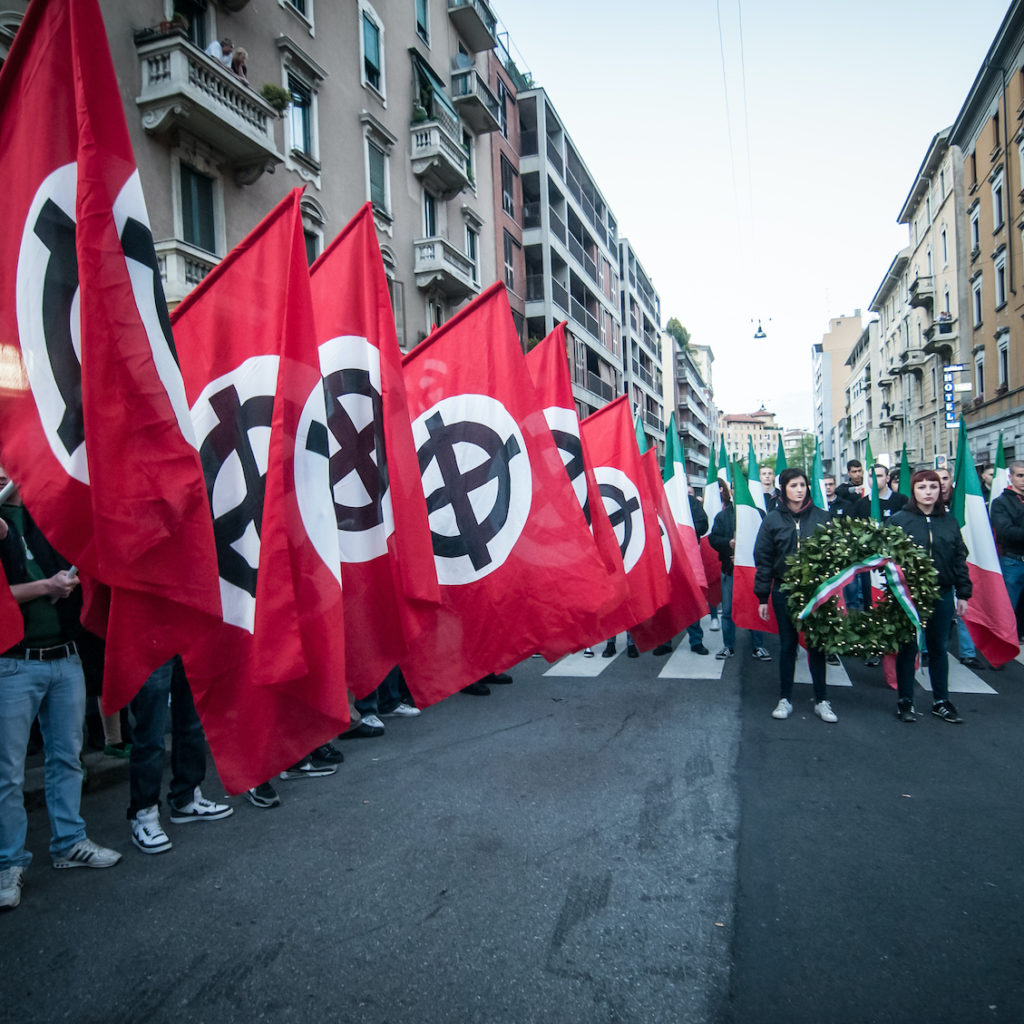 Neo-fascism is a post–World War II ideology that includes significant elements of fascism. Neo-fascism usually includes ultra-nationalism, racial supremacy, populism, authoritarianism, nativism, xenophobia and opposition to immigration, as well as opposition to liberal democracy, parliamentarianism, Marxism, communism and socialism. Allegations that a group is neo-fascist may be hotly contested, especially if the term is used as a political epithet. Some post–World War II regimes have been described as neo-fascist due to their authoritarian nature, and sometimes due to their fascination with and sympathy towards fascist ideology and rituals.

Meanwhile, post-fascism is a label that has been applied to several European political parties that espouse a modified form of fascism and which partake in constitutional politics. Unlike the fascists, however, neo-fascists placed more blame for their countries’ problems on non-European immigrants than on leftists and Jews, displayed little interest in taking lebensraum (living space) through the military conquest of other states, and made concerted efforts to portray themselves as democratic and “mainstream.” The National Front in France, led until 2011 by Jean-Marie Le Pen and later by his daughter, Marine Le Pen, and the Liberal-Democratic Party in Russia, led from 1991 by Vladimir Zhirinovsky, are often cited as neo-fascist.

Inhabiting the social periphery between the middle and the working class, neo-Fascism appeals mostly to those deprived of their former independent status (as artisans, white-collar workers, small-holders, craftsmen, etc.) by the growth of an urban, industrialized society and driven to xenophobia and hostility toward minority groups, which they believe to have either caused their social and economic decline or contributed to it. Hatreds vary according to demographic conditions.

In the United States and Britain, neo-Fascist movements have a strong anti-color bias, whereas similar French groups in the 1950s and early 1960s were anti-Algerian, and in Switzerland these prejudices inspired agitation against alien workers. Antisemitism is almost always implicit in such attitudes and it can easily become, as in the case of the Argentinian Tacuara or the Swedish Nordiska Rikspartiet (Nordic Realm Party), an ideological focal point.

According to an article by Piero Ignazi, fascism is dead but radical right is alive. “Because,” he says “we still observe the rise of attitudes that overlap with fascist ideology: anti-liberal and anti-democratic thinking and postures. The present extreme right, or radical-populist, movements all over Europe express hostility to the cornerstones of liberal-democratic systems. They preach for an exclusionary, homogenous society where foreigners are banned; for a tough government which send to the wall any opposition; for traditional values which marginalize non-conformist behavior.”

However, within the political science community, scholars typically draw a sharp distinction between the “radical right” and “fascism.” But, through an article, Nigel Copsey challenges such a distinction, and encourages scholars to reprise fascism’s relationship to the radical right. He suggests that (neo)fascism’s past offers the best route to understanding the present-day radical right. Such a historical interpretation seeks to enhance our understanding of the central importance of the neo-Fascist European New Right as the “missing link” between fascism and contemporary radical right-wing populism.

Moreover, according to him, much of the scholarly literature theorizing the radical right also fails to take into account activist cultures and shared domains. Rather than breaking the historical link between the radical right and fascism, he calls on those studying this field to reinstate this important link, thereby acknowledging the continuing presence of fascism in today’s radical right. Copsey is also quoted by Tamas Dezso Ziegler in one of his articles as “radical right-wing populism (if we want to persist with this label) has grown in sophistication largely due to the influence of neo-fascist theorists, particularly with regard to the adoption of ethno-pluralist discourse.”