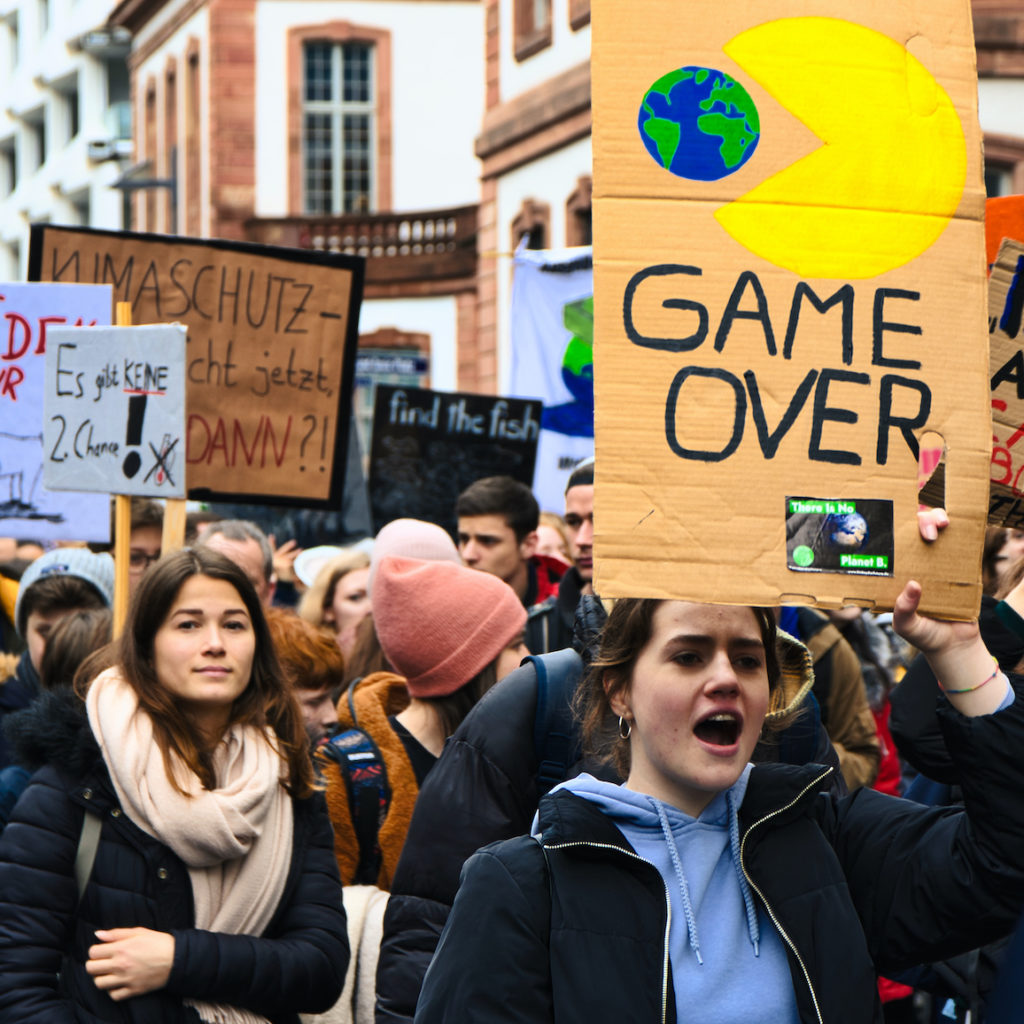 "Fridays for Future" protest in Frankfurt. Participants were protesting against climate policy in Frankfurt, Germany on March 15, 2019.

Environmentalism advocates the preservation, restoration and improvement of the natural environment and critical earth system elements or processes such as the climate and may be referred to as a movement to control pollution or protect plant and animal diversity. For this reason, concepts such as a land ethic, environmental ethics, biodiversity, ecology, and the biophilia hypothesis figure predominantly.

At its crux, environmentalism is an attempt to balance relations between humans and the various natural systems on which they depend in such a way that all the components are accorded a proper degree of sustainability. The exact measures and outcomes of this balance is controversial and there are many different ways for environmental concerns to be expressed in practice. Environmentalism and environmental concerns are often represented by the color green, but this association has been appropriated by the marketing industries for the tactic known as greenwashing.

The rise of ‘populism’, often conflated with authoritarianism, is frequently viewed as being antagonistic to environmental values, where the latter are associated with ‘liberal elites’, says William Davies in an article and adds “However, with a less pejorative understanding of populism, we might be able to identify elements within that can be usefully channelled and mobilized towards the urgent rescue of human and non-human life, in a non-exclusionary or territorial sense.”

According to an article by Mark Beeson, populism and environmentalism are words seldom seen in the same sentence. One is associated predominantly with nationalists and charismatic leaders of “real people”, the other with broadly-based collective action to address the world’s single most pressing problem. Differences don’t get much starker, it would seem. But we are increasingly seeing the two strands combine in countries around the world.

Amanda Machin and Oliver Wagener assert in an article that there are many good reasons for the assumption that populism and environmentalism cannot coincide. But this assumption misrepresents the picture. Environmentalism is not entirely absent from populism. Rather, it emerges in unconventional, problematic, and surprising ways. The study of green populism may provide an insight into the both the limitations of mainstream environmental policy and the salience of populist politics.

They say that this might be because environmentalism is conventionally seen as part of a liberal internationalist political agenda, focused upon the building of global treaties and the forging of inclusive alliances across national boundaries, an agenda clearly antagonistic to much populist discourse. “Nevertheless, environmental concerns tinge populism with a green hue; ‘nature’ is articulated as part of ‘the peoples’’ rights, heritage and identity, to be protected against ‘others’ such as neoliberal elites or foreign immigrants,” add Machin an Wagener.

According to the article, populism comes in various guises and cannot be pinned to one specific agenda. They say that “populism is inevitably fixated upon ‘the people’ and the demands articulated by populism are often socio-economic claims for higher wages, better welfare or secure borders. But demands are also made regarding environmental concerns. Calls for the protection of landscapes, forests, and animals resonate with ‘the people’ and become important unifying symbols. The question here is whether environmental resources and concerns are simply politically exploited by populist rhetoric or if their evocation plays a more profound role in populist discourses.”

William Davies asserts that where nature itself is defined by its mortality, environmentalism and political action acquire a common logic, that could fuel a participatory, egalitarian, green populism. Stating that a key feature of the major environmental risks facing the planet today is how little time there is to deal with them, Davies say that “our ecological condition should trigger a sense of emergency, potentially summoning up new forms of ‘state of exception’. One way in which the climate ‘emergency’ has been welded together with political tactics of an ‘exceptional’ nature is in the ‘Climate mobilization’ movement, which seeks to model climate policies along the lines of wartime mass mobilization of economic and civic infrastructures. This type of emergency response, at national and international scales, is one possible manifestation of what a democratic ‘green populism’ might look like.”

According to Davies, the popular revival of the ‘Green New Deal’ signals how technocratic and democratic visions can be welded together, around a sense of urgency and the deep unsustainability of the status quo. “Theorists of ‘ecological democracy’ and ‘environmental citizenship’ have explored various ways in which values of environmentalism and participation can be combined and fused. The challenge in mobilizing a ‘people’ around emancipatory environmental concerns is to foreground ‘terrestrial’ politics (which starts from the fact that we are earth-bound) and avoiding a ‘territorial’ one (which starts from the premise that we are spatially bordered),” he underlines.

A challenge of a democratic and inclusive ‘green populism’ is of how to construct a common political world, in which the lives, actions and deaths of humans and non-humans are granted recognition and meaning, qua life, and never as territorially-limited identities, says Davies. He continues to say that “this does not mean subsuming them under general laws of statistics and mathematics, by way of pure technocratic administration. Rather, it means re-imagining centers of techno-scientific expertise in ways that are attuned to the constantly shifting conditions of human and non-human life, that recognizes the passage of time and the loss that accompanies it, as ontologically and politically decisive.”