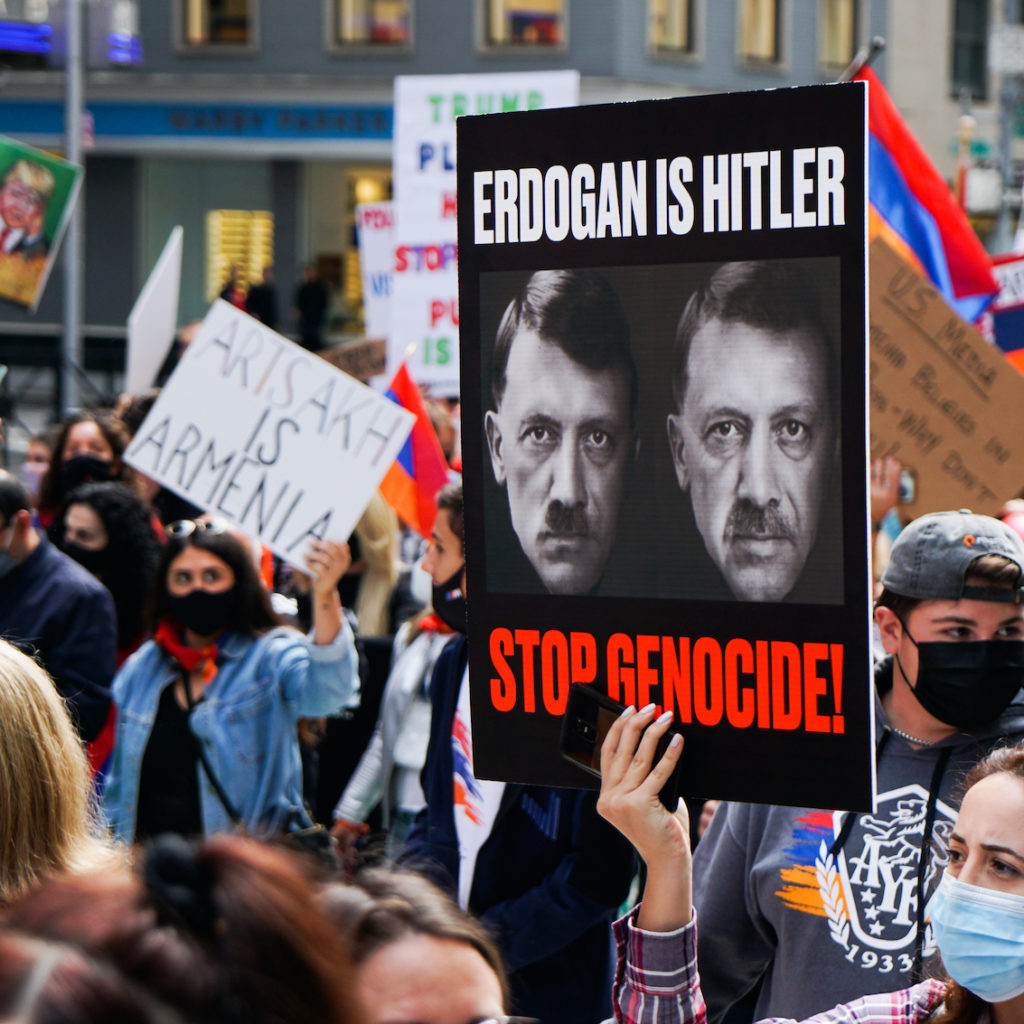 Autocrats like Erdogan and Orban who use pseudo democratic institutions are not necessarily less repressive than their institution-free counterparts. Armenian people protested Erdogan in New York City on October 10, 2020. Sign reads "Erdogan is Hitler, Stop Genocide".

Pseudo democracy describes a political system which calls itself democratic but offers no real choice for the citizens. This lack of choice can come from limited amount of diverse parties eligible for a vote, cemented power structures which are not really affected by any vote, no availability of a voting option “none of the above” for voters who favor change to the current political landscape, no direct democratic means, etc…

According to an article by Frederic Volpi, the key tactics employed by the regime to entrench this pseudo democratic model include the informal pre-selection of the candidates, the stage-management of the election campaign and the televised media, and poll fixing and electoral demobilization. “This domestic evolution of pseudo democratic politics occurs in a propitious international context where the combination of economic (oil) and security (terrorism) concerns favors trends towards short-term domestic stability at the expense of long-term democratic transformation,” says Volpi.

According to an article by Ihsan Yilmaz and Kemal Özden, in a pseudo democracy, there is a hegemonic party system. In this system “a relatively institutionalized ruling party monopolizes the political arena, using coercion, patronage, media control, and other means to deny formally legal opposition parties any real chance of competing for power”. In the words of Volpi, “the term ‘pseudo democracy’ resonates distinctively with the contemporary era, in which democracy is the only broadly legitimate regime form, and regimes have felt unprecedented pressure (international and domestic) to adopt—or at least to mimic—the democratic form”. In such a political setting, “the existence of formally democratic political institutions, such as multiparty electoral competition, masks (often, in part, to legitimate) the reality of authoritarian domination.”

To the article, some other scholars label this phenomenon as “tactical liberalization”. In these tactically liberalized pseudo-democracies, “elections and other ‘democratic’ institutions are largely façades, yet they may provide some space for political opposition, independent media, and social organizations that do not seriously criticize or challenge the regime”.

“For many, populism is also a pseudo democratic style of politics. In the name of an imagined ‘people’ defined as if it were a demiurge, something akin to a metaphysical gift to earthlings from the gods, populism is a style of politics whose ‘inner logic’ or ‘spirit’ (Montesquieu) destroys power-sharing democracy committed to the principle of equality…” wrote John Keane wrote in an article. He continued: By publicly exposing the Trump-style crudeness and potential brutality of unbridled state power exercised in the name of ‘the people’, populism can spark long-lasting democratic reforms. But everywhere, at all times, the inner logic of populist politics and its “folksy slogans” are anything but folksy: their practical effect is to rob life from power-sharing democracy.

According to Keane, populism necessitates demagogic leadership. It encourages attacks on independent media, expertise, rule-of-law judiciaries and other power-monitoring institutions. Populism “denies the pluralism of contemporary societies.” Because, democracy means a system in which free and fair elections determine who holds power. Thus, the state must allow free expression of opinion, a free media, impartial execution of election law, a universal adult franchise and the right of political competitors to obtain the resources they need. Today, elections confer legitimacy. For this reason, many authoritarians offer “pseudo democracy”, but not the reality. Elections in such countries are a form of theatre. Everybody knows the leader will not let himself be defeated. Such a regime is not just a bit different from a democracy: it is an entirely different animal.

“Populism” is apparently defined either by its anti-democratic, “fascist” orientation or by its pseudo democratic appeal. In the second case, it is seen as nothing more than a corruption of the democratic idea, or else a tactical abuse of the appeal to democracy, according to an article written by Pierre-André Taguieff. However, he claims, pseudo democracy are not dominant characteristics of the historical populist movements in Europe and the Americas. The reformist and ‘progressive’ orientation of humanist socialism predominated in the Russian populism of the second half of the nineteenth century; in American populism at the close of the nineteenth century, critiques of capitalism were also linked to reformist projects. Neither movement rejected democratic values ​​or standards; instead, they sought to realize them more fully.

To Taguieff’s article, populism is an unstable, indeterminate sociopolitical phenomenon, one that precedes change just as much as it follows it. Politically, it oscillates between hyper-democraticism (the regulatory idea or utopia of a direct democracy), pseudo democraticism (which courts ‘the people’ for reasons of self-interest), and anti-democraticism (which is always more or less hidden behind declarations of good democratic intentions).

According to an article by Petra Bárd and Laurent Pech, having regard to the transformation of Hungary’s constitutional order under Viktor Orbán, three main steps may be distinguished when it comes to establishing and consolidating a partly free, pseudo democracy in a country where democracy was previously said to be solidified:

The authors say the lessons one may draw from Hungary’s descent into authoritarianism under Orbán may help designing more resilient systems so as to prevent additional countries from experiencing a similar deliberate process of democratic and rule of law backsliding, which in the Hungarian case, has resulted in the transformation of a previously consolidated democracy into a partly free, pseudo democracy. Because, they believe Orbán’s Hungary is best described as a partly free, pseudo- democracy where the “constitutional pillars of liberal democracy” have been destroyed with the consequence that Hungarian citizens can no longer “choose and replace their leaders in free and fair elections”.

Writing an article together, Zoltan Kovacs and Larry Diamond are agree with Bárd and Pech. They said Orban had rigged the system. “Yes, multiparty elections continued, but his systematic degradation of constitutional checks and balances so tilted the playing field that he was able to renew his two-thirds majority in parliament with less than a majority of the popular vote. The repeated resort to xenophobic and anti-Semitic cannot alter the facts. Orban has transformed Hungary into not an illiberal democracy but a pseudo-democracy.”

Especially right-wing populism, according to an article by Henry Giroux, offers a pseudo democratic notion of politics in which matters of informed judgment, critical agency and collective action disappear into the symbol of the leader. “In this discourse, politics becomes personalized in the image of the larger-than-life demagogue, removed from the alleged ignorance of the masses or ‘herd.’ The past and present emergence of right-wing populist leaders is exemplified in the rise of Donald Trump, Jair Bolsonaro and Geert Wilders, among others. Right-wing populism destroys everything that makes a genuine democratic politics possible,” he wrote.

“Populism tends toward extremes, and a pseudo democratic style of politics that embraces an imagined people, oversimplifications, and charismatic and demagogic leaders,” according to Giroux. Meanwhile, Andrea Kendall-Taylor and Erica Frantz wrote in article that today’s autocracies are a new breed: “In the past, dictatorships have relied heavily on overtly repressive methods of control. The regimes of the past, and particularly those prior to the spread of information technology such as social media, were more likely to ban political activities, censor opponents, and limit public manifestations of dissent to maintain power. Modern autocrats, in contrast, are more likely to manipulate pseudo democratic institutions to serve their own self-interests.”

Dictators (like Erdogan and Orban) who use pseudo democratic institutions are not necessarily less repressive than their institution-free counterparts, according to Kendall-Taylor and Frantz. They say “indeed, research has shown that these institutions do not lower overall repression levels, but instead enable autocrats to use repression in more targeted and less costly ways. Dictatorships with multiple parties and a legislature, for example, are more likely to use repression to target and punish specific opponents, but less likely to use it to indiscriminately restrict civil liberties. By increasing incentives to participate in the regime, these institutions provide dictators with an additional form of surgically-targeted political control, enabling them to survive in office longer than their predecessors.”