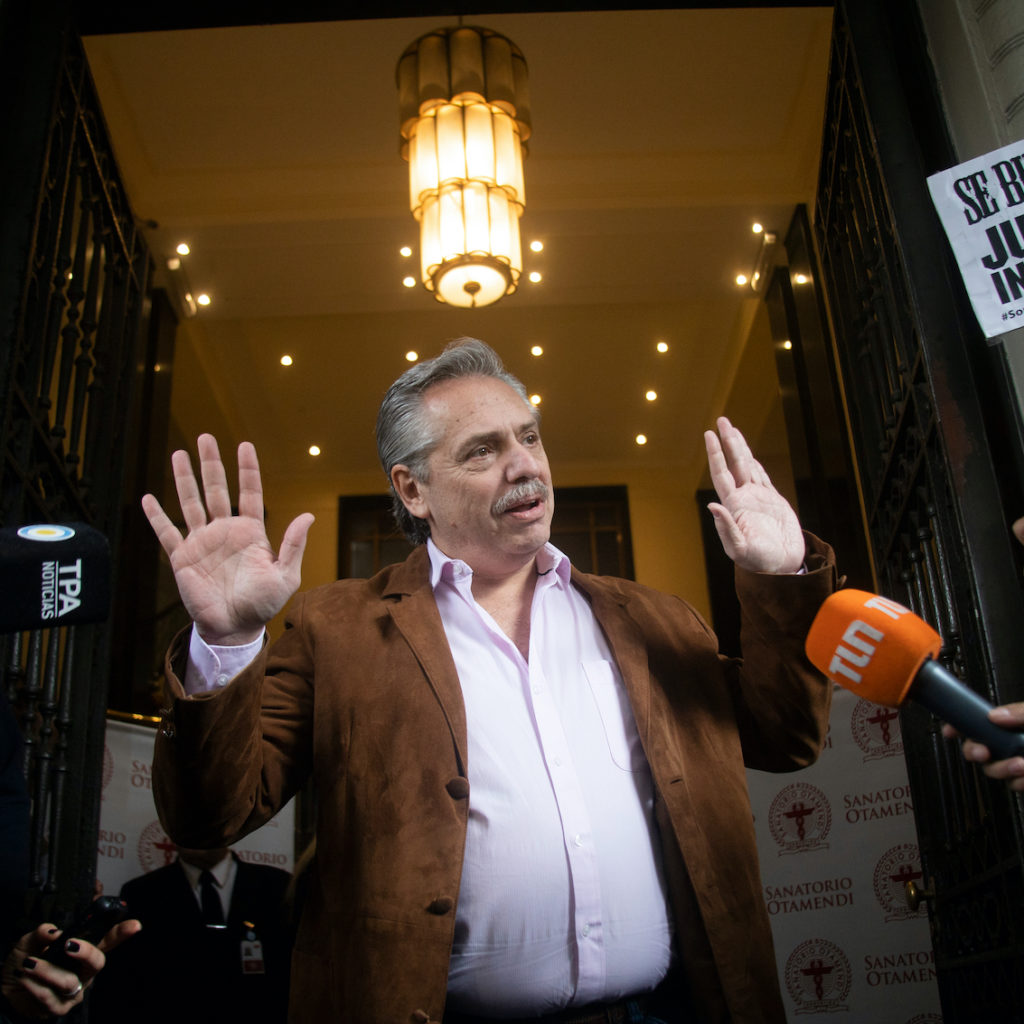 One inspiration for the Peronist Third Position certainly was the fascist attempt to create an alternative to liberalism and communism. Argentina's President centre-left Peronist Alberto Fernandez speaks with the press at the Otamendi clinic in Buenos Aires on June 6, 2019.

In the last few years of the 20th Century, according to an article by Chip Berlet, a new form of fascism emerged in a period of resurgent neo-fascism. Called the Third Position, it seeks to overthrow existing governments and replace them with monocultural nation states built around the idea of supremacist racial nationalism and/or supremacist religious nationalism.

Berlet argues that Third Position neo-fascists have organized in the US, Europe, and the Middle East, and they maintain some kind of loose network, at least for the purposes of discussing their shared ideas and agenda, but in some cases involving meetings and even funding. For instance, Libyan president of Muammar Qadhafi sponsored several international conferences in Libya promoting his special variation of racial nationalism and cultivating ideas congruent with Third Position ideology. Qadhafi also offered funds to racial nationalist groups active in the US and Canada, according to Berlet.

Berlet argues that the Third Position has a more intellectual aristocratic ally called the European New Right. Intellectual leaders of the European New Right, such as Alain de Benoist, are hailed as profound thinkers in US reactionary publications such as the Rockford Institute’s Chronicles. Third Position groups believe in a racially-homogeneous decentralized tribal form of nationalism and claim to have evolved an ideology “beyond communism and capitalism.”

White supremacist leader Tom Metzger promotes Third Position politics in his newspaper WAR which stands for White Aryan Resistance. In Europe, the Third Position defines its racial-nationalist theories in publications such as Third Way and The Scorpion. Third Position adherents actively seek to recruit from the left. One such group is the American Front in Portland, Oregon, which ran a phone hotline that in late November 1991 featured an attack on critics of left/right coalitions. Some Third Position themes have surfaced in the ecology movement and other movements championed by progressives.

According to Berlet, in the 1970s and 1980s efforts to reinterpret fascism were not confined to the US but took place among neo-fascists in many industrialized capitalist countries. “European, Canadian, and South African neo-fascists, too, at times advanced the doctrine known as the Third Position, strengthened internationalist ties, used coded racial appeals, advocated ethnic separatism and the breakup of nation-states, and practiced solidarity with right-wing nationalists of color,” he writes.

The Third Position — which rejects both capitalism and communism – traces, according to Berlet, its roots to the most ‘radical’ anti-capitalist wing of Hitler’s Nazi Party. In the 1970s and 1980s, neo-Nazis in several European countries advocated the Third Position. He says that out of the stew of the Third Position, and the European New Right theories of intellectuals such as Alain de Benoist, came a new version of White Nationalism that championed racially separate nation-states. In the US this filtered down to White supremacists, who began to call themselves White Separatists. Dobratz and Shanks-Meile believe that “most, if not all, whites in this movement feel they are superior to blacks.” Instead of segregation, however, White Separatism called for “geographic separation of the world’s races” and in the US this prompted calls for an Aryan Homeland in the Pacific Northwest.

Meanwhile, some others argue that the Third Position is a political ideology that developed in Western Europe following the 2nd World War. Developed in the context of the Cold War, it developed its name through the claim that it represented a third position between the capitalism of the Western Bloc and the state socialism of the Eastern Bloc.

Between the 1920s and 1940s, various fascist groups presented themselves as part of a movement distinct from both capitalism and Marxist socialism. This idea was revived by various political groups following the 2nd World War. The rhetoric of the ‘Third Position’ developed among Terza Posizione in Italy and Troisième Voie in France and in the 1980s was taken up by the National Front in the UK. These groups emphasize opposition to both communism and capitalism. Advocates of Third Position politics typically present themselves as “beyond left and right” while syncretizing ideas from each end of the political spectrum, usually reactionary right-wing cultural views and radical left-wing economic views.

On the other hand, according a book by Mirko Petersen, the Third Position experience in Argentina had different ideological dimensions. One inspiration for the Peronist Third Position certainly was the fascist attempt to create an alternative to liberalism and communism, according to Petersen. Perón, who visited Italy in the early phase of the Second World War, was especially inspired by the political organization of Mussolini regime, and Catholic-nationalist circles in Argentina were expressing views which were similar to those of Spanish dictator Franco.

Following the Catholic-nationalist worldview, Peterson says, the Third Position could be understood as the expression of a Hispanic-Catholic civilization, superior to both the Slavic and Anglo-Saxon civilization represented by the two Cold War superpowers. “It is important to consider fascism and Catholic nationalism as sources of inspiration for Peronism – especially concerning political organization and iconography,” he argues.

However, this dimension of the Third Position can easily mislead us, according to Peterson, to simply interpret Peronism in a Eurocentric fashion and label it as a South American version of European totalitarian and authoritarian experiences. To avoid this pitfall, two other, more important, dimensions of the Third Position should be considered as well. First, it must be mentioned that Argentina stayed neutral in both World Wars I and II, and there existed something like a tradition of Argentine neutrality and non-interference in international warfare. This is a position that went far beyond Peronism and was also the consensus among many conservatives and liberals.

Having an ideology which is a mix of leftist and rightist ideas — e.g., environmentalism, wealth redistribution — with a racist agenda identifying Jews and immigrants as prime enemies, International Third Position (ITP) was a neo-fascist organization formed by the breakaway faction of the British National Front, led by Roberto Fiore, an ex-member of the Italian far-right movement Third Position.

Initially the ITP distanced itself from traditional Fascism and Nazism, promoting ‘racial separatism’ rather than crude racism. The ITP operated more as an elite cadre than a mass movement. Promoting a ‘back to the land’ ideal of rural traditionalism, the group even purchased Los Pedriches, a remote Spanish village in 1997. This initiative was funded through a charity called Saint Michael the Archangel. Purporting to be an apolitical Roman Catholic charity the group, which had several charity shops in the UK, was exposed as an ITP front in the press in 1999.

According to a report by Southern Poverty Law Center (SPLC), a mix of ‘left’ and ‘right’ sites have sprung up in the Internet in recent years and many of them have strong neo-fascist overtones. A burgeoning number of sites devoted to ‘Third Position’ ideology.