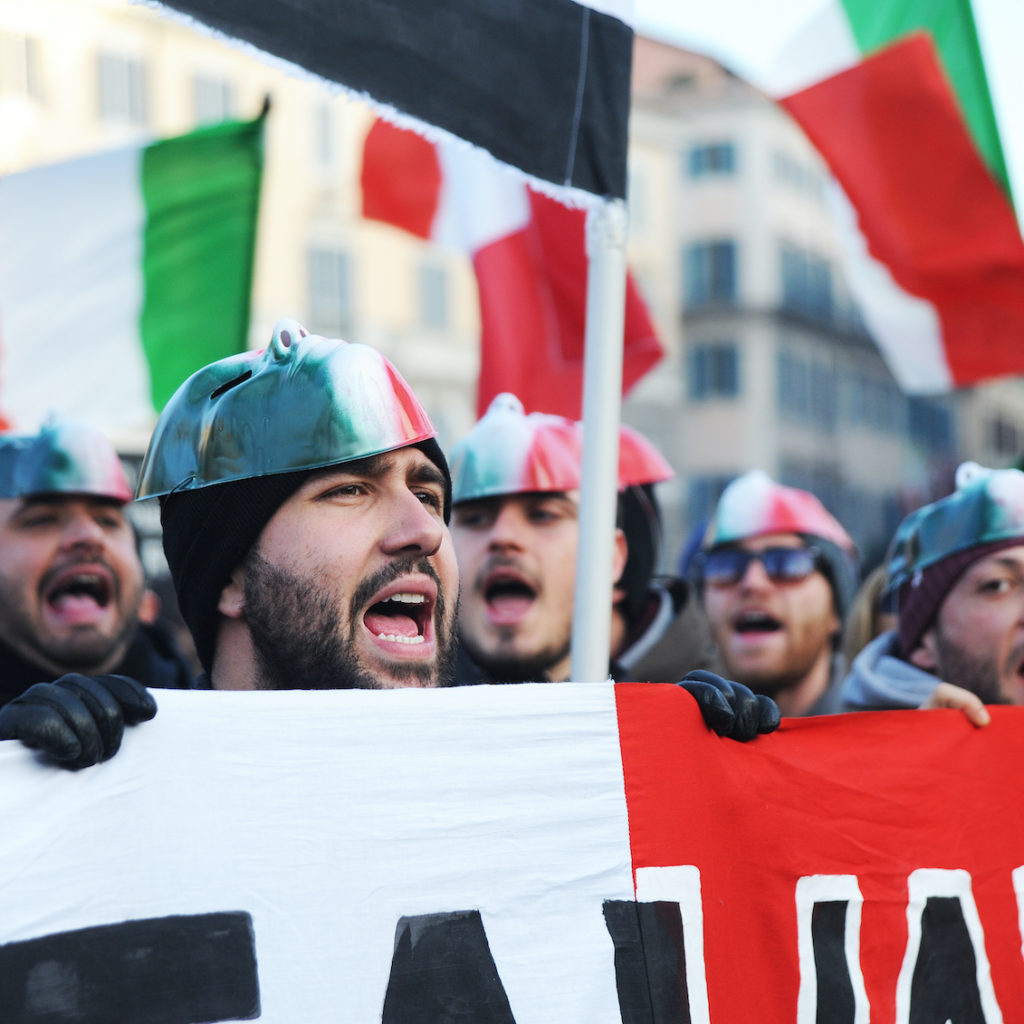 Supporters of the extreme far-right party protest in the streets of Rome against inmigration policy on May 12, 2016.

Far-right politics are politics further on the right of the left-right spectrum than the standard political right, particularly in terms of extreme nationalism, nativist ideologies, and authoritarian tendencies. Used to describe the historical experiences of fascism and Nazism, it today includes neo-fascism, neo-Nazism, Third Position, the alt-right, white nationalism and other ideologies or organizations that feature ultranationalist, chauvinist, xenophobic, theocratic, racist, homophobic, anti-communist, or reactionary views. These can lead to oppression, violence, forced assimilation, ethnic cleansing, and even genocide against groups of people based on their supposed inferiority, or their perceived threat to the native ethnic group, nation, state, national religion, dominant culture or ultraconservative traditional social institutions.

The core of the far right’s worldview is organicism, the idea that society functions as a complete, organized and homogeneous living being. Adapted to the community they wish to constitute or reconstitute (whether based on ethnicity, nationality, religion or race), the concept leads them to reject every form of universalism in favor of autophilia and alterophobia, in other words the idealization of a “we” excluding a “they”. The far-right thus tends to absolutize differences between nations, races, individuals or cultures since they disrupt their efforts towards the utopian dream of the organicist community, reconnected to its quasi-eternal nature and established on firm metaphysical foundations.

As they view their community in a state of decay facilitated by the ruling elites, far-right members portray themselves as a natural, sane and alternative elite, with the redemptive mission of saving society from its promised doom. The current political order is presented as needing to be abandoned or purged of impurity, so that the “redemptive community” can leave the phase of liminal crisis to usher in the new era. The community itself is idealized through great archetypal figures (the golden age, the savior, decadence, global conspiracies), as they glorify irrationalistic and non-materialistic values such as the youth or the cult of the past.

Cas Mudde defines the far-right as a combination of four broad concepts: exclusivism (i.e., racism, xenophobia, ethnocentrism, or ethnopluralism); antidemocratic, non-individualist traits (i.e., cult of personality, hierarchism, monism, populism, antipartyism, an organicist view of the state); a traditionalist value system lamenting the disappearance of historic frames of reference (i.e., law and order, the family, the ethnic, linguistic and religious community and nation, as well as the natural environment); and a socioeconomic program associating corporatism, state control of certain sectors, agrarianism and a varying degree of belief in the free play of socially Darwinistic market forces. Mudde then proposes a subdivision of the far-right nebula into moderate and radical leanings, according to their degree of exclusionism and essentialism.

Far-right politics includes but is not limited to aspects of authoritarianism, anti-communism and nativism. Claims that superior people should have greater rights than inferior people are often associated with the far-right, as they have historically favored a Darwinistic or elitist hierarchy based on the belief in the legitimacy of the rule of a supposed superior minority over the inferior masses.

According to another article by Mudde, while the radical right, which rejects liberal democracy (i.e. minority rights, rule of law, and separation of powers), is increasingly mainstreamed and normalized, the extreme right, which rejects even democracy (i.e. popular sovereignty and majority rule), has made a return too. “Neo-Nazi parties have been elected to parliament in Greece and Slovakia, while populist radical right parties and politicians openly flirt with extremist ideas, from dictatorship in Brazil (Jair Bolsonaro) to open racism in Estonia (Conservative People’s Party of Estonia, or EKRE),” writes Mudde and adds that “Hence, we should focus on the ‘far right’ as a whole, which combines the extreme right and radical right, their complex and various internal relationships, and their effects on liberal democracy.”

Mudde asserts that “economic anxiety” is secondary to the support of the far right and underlines the fact that “The main driver is ‘cultural backlash’ and, as far as economics plays a role, it is in a racialized manner—nativists believe that ‘aliens’ are getting too numerous or powerful and that is why they think the national economy is in dire straits.”

However, following a study, Manuel Funke, Moritz Schularick, and Christoph Trebesch stated that they found that far-right parties are the biggest beneficiaries of financial crashes. After a crisis, the share of the vote going to right-wing parties increases by more than 30 percent. Saying that their historical data show that most political upheavals after financial crises have been temporary, they assert “After five years, voting patterns usually return to their pre-crisis status quo, fractionalization within parliaments decreases, and the far right loses its momentum. This time is different. Ten years on, fractionalization, polarization, and far-right voting are all alive and well. The established political system continues to stumble from one shock to another. Even countries that until recently had been immune to far-right politics have started to succumb.”

Moreover, Daphne Halikiopoulou writes in an article that far-right populists have fared particularly well in recent electoral contests within their domestic arenas and are projected to gain about a third of the seats in the new European Parliament. Depending on who joins, Matteo Salvini’s initiative to create a successful far-right populist family, the European Alliance of People’s and Nations, threatens to make this one of the largest groupings in the European Parliament, challenging the European project at its core.

She says a consensus has been emerging behind some version of a ‘backlash’ story, which sees far-right populism as the product of cultural grievances. “Often this leads to rather fatalistic assessments of the populists, premised on the assumption that such ‘demand’ drives their ‘supply’, with the implication by extension that they should be passively accommodated into the mainstream—for example through the adoption of stricter immigration policies by center-right and even center-left parties,” writes she and adds that “the conventional wisdom is that the rise of the far-right populists is down to a popular cultural backlash. What’s really happened is they have broadened their support through a civic-nationalist narrative.”

According to Halikiopoulou, what makes far-right populist parties successful is precisely their nationalist message—more specifically, the ways in which they justify the exclusion of the outgroup: “This is no longer in terms of ascriptive or organic criteria (as deployed by fascist or conventional extreme-right parties) but rather is done through civic distinctions—seeking to exclude those who supposedly do not espouse ‘our’ values of democracy and tolerance. Through this civic-nationalist narrative, far-right populists normalize exclusion: they offer solutions to voters’ multiple insecurities by using a rhetoric that excludes a variety of population groups on the basis that they are a purported threat to society’s value consensus, and hence to stability and prosperity.”

Halikiopoulou says the adoption of this form of civic nationalism, which excludes on the basis of ideological rather than biological criteria of national belonging, can in many ways be seen as the far-right populist party’s new ‘winning formula’, permitting it to appeal to a wide spread of social groups with different backgrounds and preferences. From Marine Le Pen’s embrace of French republicanism and laïcité to the AfD’s anti-Muslim campaign, what these parties have in common in the way in which they present culture as about adherence to purportedly national values.

“Not long ago, right-wing populists looked poised to take a share of power across much of Europe,” remind Lukas Kaelin and Benjamin Kaelin in an article and continue “Over the past decade, far-right parties gained power in Hungary, the Czech Republic, and Poland. Then in 2017, Strache’s Freedom Party won 26 percent of the vote in Austria and became the junior partner in a coalition government with the right-wing Austrian People’s Party. Like other far-right populists, the Freedom Party campaigned on a message of ‘us’ versus ‘them,’ positioning itself as the only legitimate advocate for the people in a highly personalized campaign centered on Strache. Austrians, in the party’s narrative, were homogenous, pure, traditional, and hard-working—and under attack from immigrants. Once in office, the Freedom Party worked with the Austrian People’s Party to push through tougher immigration policies and measures restricting access to welfare benefits for minorities and immigrants.”

Analysing the micropolitics of the populist far right in the ‘post-shame era’
Wodak, R. 2019 In: Europe at the Crossroads. Nordic Academic Press p. 63-92. 16 p.