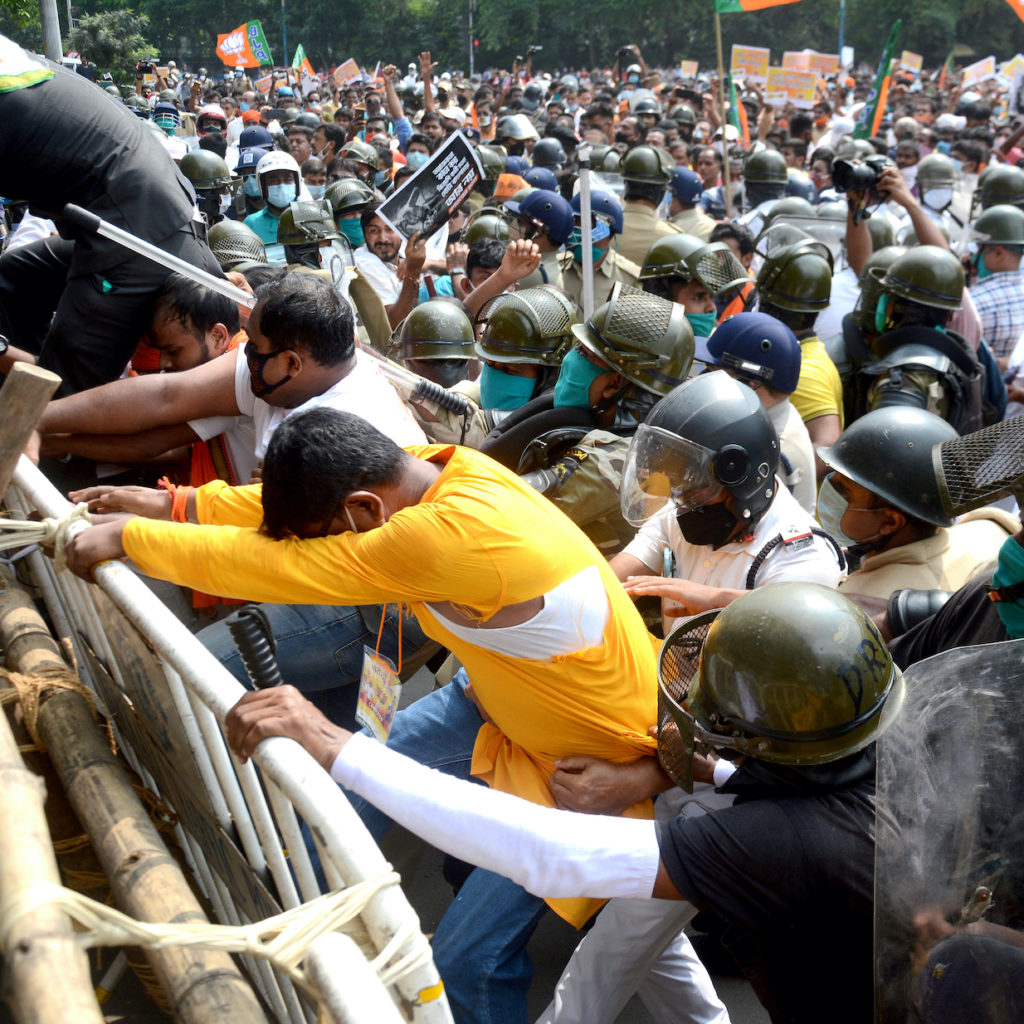 Activists of BJP try to breakthrough a police barricade during a protest towards WB CM Mamata Banerjee's office to protest against the "worsening" law and order situation in Kolkata on October 8, 2020.

The native thought streams became highly relevant in Indian history when they helped form a distinctive identity in relation to the Indian polity and provided a basis for questioning colonialism. They inspired the independence movements against the British Raj based on armed struggle, coercive politics, and non-violent protests. They also influenced social reform movements and economic thinking in India.

The BJP supports a uniform civil code, which would apply a common set of personal laws to every citizen regardless of their personal religion, replacing the existing laws which vary by religious community. According to historian Yogendra Malik, this ignores the differential procedures required to protect the cultural identity of the Muslim minority. The BJP favors the abrogation of Article 370 of the Constitution of India, which grants a greater degree of autonomy to the Jammu and Kashmir in recognition of the unusual circumstances surrounding its accession to the Indian Union.

The BJP also opposes illegal migration into India from Bangladesh. The party states that this migration, mostly in the states of Assam and West Bengal, threatens the security, economy and stability of the country. Academics have pointed out that the BJP refers to Hindu migrants from Bangladesh as refugees and reserves the term ‘illegal’ for Muslim migrants. Academic Michael Gillan writes that this is an attempt to use an emotive issue to mobilize Hindu sentiment in a region where the party has not been historically successful.

As of now, the BJP has not been approached as a populist party by the scholarship. In fact, while the great majority of research on populism has focused on the US, Europe and South America, the Indo-Pacific region, and India in particular, have been somewhat neglected, with the exception of studies concerning populist leaders rather than populist parties. This shortcoming is difficult to comprehend, especially if considering that the BJP, in power since 2014 and allegedly the world’s largest political party in terms of membership, is commonly portrayed as a right-wing populist party, and Prime Minister (PM) Narendra Modi as the perfect example of a populist leader.

Originally the BJP was surely nationalist, but not populist. In the first manifestos, the concept of Indian “nation” is much more relevant than that of “the people”; a populist turn occurs partially in 1996, when both people-centrism and anti-elitism make their appearance; however, it is only in 2014 that the BJP becomes a textbook populist party. From the beginning, though, it is possible to distinguish those whom the party considers as “the people”. These are all Indians, regardless of their caste, religion or language. All groups, including minorities, must be guaranteed equal justice and development.

Throughout the years, emphasis is increasingly given to the most unprivileged sections of the population. What appears as an inclusive conceptualization of “the people” on a class basis, though, hides some hints of a nativist stance, particularly in relation to three key provisions: the abrogation of article 370, the ban on cow slaughter and the construction of a Ram temple in Ayodhya. Sense of identity and feelings of the Kashmiri do not seem to be a source of concern for the BJP, which promotes a very homogeneous idea of the Indian nation embedded in the words, often repeated: “One Nation, One People and One Culture”. This feature represents a basic principle of populism: “the people” are understood as a homogeneous entity.

In 1996, Hindutva is mentioned for the first time as the guiding ideology of the BJP, but it is only clearly enunciated in 1998. Hindutva is “this cultural heritage which is central to all regions, religions and languages, is a civilizational identity and constitutes the cultural nationalism of India.” In 2004 the BJP openly affirms that it seeks no distinction between majority and minorities in politics; while in 2009, that the concept of minority perpetuates discrimination and victimhood, reinforcing the perception of a separate identity. Opposition to political pluralism and protection of minorities represents a distinctive feature of BJP, that has a radical interpretation of the majoritarian rule and are against minority rights.

According to a report written by a Task Force at the University of Washington, in the Hindutva populist political discourse, it is projected that Muslims are getting more benefits from the political system and that political parties appease and unduly favor Muslims in what many call “pseudo secularism.” However, the Sachar Committee Report proves this portrayal of Indian Muslims is incorrect. For example, there are 16 constituencies in the largest Indian province, Uttar Pradesh, where the Muslim population is above 20 percent. However, not a single Muslim won a seat in the 2014 general elections. There are only 22 Muslims among 543 member parliaments elected in the 2014 general elections, which is 4.05 percent lower than their population ratio of 14 percent. One Georgetown University study finds that increasing BJP representation in India’s state legislative assemblies results in “a large and significant decrease in the likelihood of Muslims being employed in both the public and private sector.” The subject of a Uniform Civil Code, which would remove special religion-based provisions and personal laws for different religions from the Constitution of India, is thus one of the main agendas of the BJP. The Uniform Civil Code is opposed by Muslim leaders and the Indian National Congress.

Even though it has been largely ignored by the literature on populism, the BJP can undoubtedly be regarded as a right-wing populist party. Firstly, it is populist because people-centrism and anti-elitism are crucial principles in its ideology, especially since it came to power in 2014; secondly, it is right-wing because the way it conceptualizes “the people”, “the elites” and “the others” is clearly nativist, and it can be seen as authoritarian in the sense that, according to its exponents, basic freedoms can be curtailed to individuals expressing views considered as “anti-national”.

According to an article by Ali Zain, among other political leaders, Indian Prime Minister Narendra Modi is a distinctive figure who actively engaged the new media technologies to mediatize his version of populism in India. With this, Modi has successfully engraved a tech-savvy image of himself to publicize his motto of “Modi-fied India”. Social media networks, particularly Twitter, have not only helped him reach out to his followers but also served as a medium to connect him to mainstream media. These platforms have been valuable for him to reshape his public image and align himself with the aspirations of a modern India as its leader. The excessive use of modern technologies during Modi’s election campaign was termed as “high-tech populism”.

Modi also put “ostracizing the others” tool of populism in action by creating a new enemy within the population by siding with right-wing Hindus and leaving lesser space to minorities like Muslims, according to Zain’s article. He said “This is a reshaped representation of the ‘us vs. them’ notion where ‘them’ is a homogenous group of people considered inferior to ‘us’ within the population. Benefitting from his past association with right-wing Hindu movement Rashtriya Swayamsevak Sangh (RSS), Modi also wooed the Hindu population. He regularly portrayed Hindu religious symbols in his tweets, mentioned Hindu religious references in public speeches, visited renowned Hindu personalities such as Baba Ramdev and Swami Adityanath, and posted pictures of such meetings on his social media accounts during the election days… Furthermore, supporting the rhetoric that populist rulers not only require internal antagonists but also external enemies to gain the nationalist support to hold control of the affairs, Modi also exploited anti-Pakistan sentiment among the public.”

As Catarina Kinnvall wrote in an article, Modi shares with many other populist leaders the ability to unite narratives of nativism with those of religious discourse. He shares with other populists the knowledge that sentiments, images and symbols, rather than rational argument or accurate history, can galvanize individuals by offering his followers ‘a fantastical vision of making India great again’. “Religion, and in particular religious resurgence, thus provides a foundation for the creation of intolerance against those who do not share in these beliefs. ‘Othering’ becomes, in other words, a fundamental part of the closing of religious and nationalist boundaries and a foundation for much populist discourse,” wrote Kinnvall.

According to Kinvall, the Modi tenure has been disastrous for minorities, environmentalists, labor rights activists, liberal media, progressive universities, socially and economically vulnerable groups such as Dalits (oppressed castes) and farmers, to name a few. “Portrayed as the founder of a ‘new India’, as a man of progress, growth and anti-corruption market-oriented policies, Modi provides a cohesive populist narrative to a masculine state that is able to assert itself both globally and locally. His portrayal of himself as a ‘common man’ from ‘humble origins’ and his resentment of the Indian English-speaking elite is aimed to reassert Hindu pride in response to Western dominance and upper-class antipathies. Similar to other populist leaders, Modi needs to prove his extraordinariness—often in specific masculine terms: ‘in populism, the leader does not simply represent ‘the people’ but is actually seen as embodying ‘the people’.”

“Hindutva as a Variant of Right-wing Extremism,” Eviane Leidig, Patterns of Prejudice, forthcoming