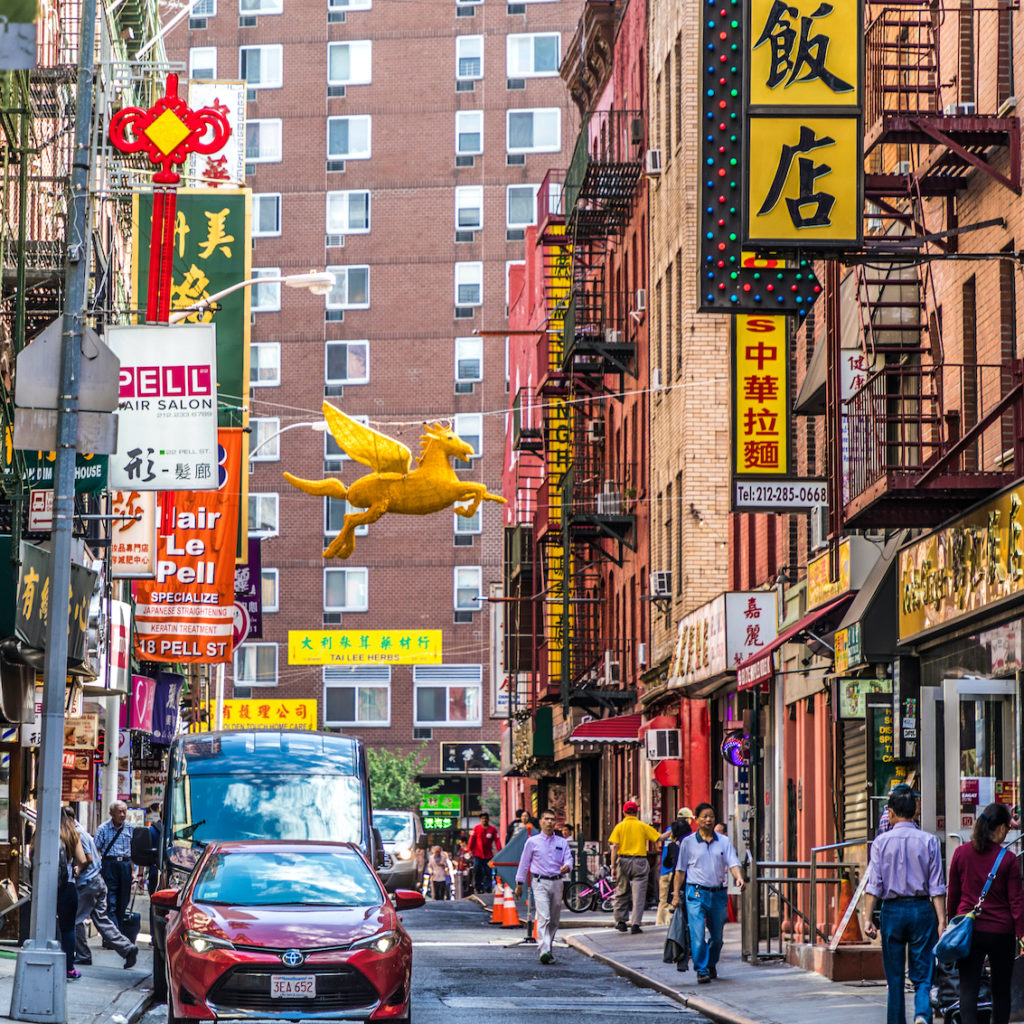 Chinatown in Manhattan with shops with Chinese letters and Pegasus in New York.

As more liberal theory of multiculturalism than the melting pot, the salad bowl theory describes a heterogeneous society in which people coexist but retain at least some of the unique characteristics of their traditional culture, writes Robert Longley in an article. According to Longley, like a salad’s ingredients, different cultures are brought together, but rather than coalescing into a single homogeneous culture, retain their own distinct flavors. In the US, New York City, with its many unique ethnic communities like “Little India,” “Little Odessa,” and “Chinatown” is considered an example of a salad bowl society.

The salad bowl theory asserts that it is not necessary for people to give up their cultural heritage in order to be considered members of the dominant society. For example, African Americans do not need to stop observing Kwanzaa rather than Christmas in order to be considered “Americans.” On the negative side, according to Longley, the cultural differences encouraged by the salad bowl model can divide a society resulting in prejudice and discrimination. In addition, critics point to a 2007 study conducted by American political scientist Robert Putnam showing that people living in salad bowl multicultural communities were less likely to vote or volunteer for community improvement projects.

In Canada this concept is more commonly known as the cultural mosaic. An example of the European version of the salad bowl concept can be seen in its policy regarding the EU programme “integration of non-European nationals”, which finances and promotes integration initiatives targeting those who are not members of the EU 27. This project aims to encourage dialogue in civil society, develop integration models, and spread and highlight the best initiatives regarding integration.

The salad bowl idea in practice has its supporters and detractors. Supporters argue that being “American” does not inherently tie a person to a single culture, though rather to citizenship and loyalty to the US. Thus, one does not need to abandon their cultural heritage in order to be considered “American”. Critics tend to oppose the idea in tandem with other critiques on multiculturalism, saying that America needs to have a common culture in order to preserve a common national identity.

Amanda Taub writes in an article that as right-wing populism has roiled elections and upended politics across the West, there is one country where populists have largely failed to break through: Canada. According to her, the raw ingredients are present: A white ethnic majority that is losing its demographic dominance. A sharp rise in immigration that is changing culture and communities. News media and political personalities who bet big on white backlash. “Yet” she writes “Canada’s politics remain stable. Its centrist liberal establishment is popular. Not only have the politics of white backlash failed, but immigration and racial diversity are sources of national pride. And when anti-establishment outsiders have run the populist playbook, they have found defeat. Outsiders might assume this is because Canada is simply more liberal, but they would be wrong. Rather, Canada has resisted the populist wave through a set of strategic decisions, powerful institutional incentives, strong minority coalitions and idiosyncratic circumstances.”

Taub reminds that rapid changes in demographics tend to spur anti-immigrant sentiment within the dominant group, experts say, bolstering far-right politicians who promise harsh tactics against outsiders. “But although Canada’s high immigration rates have transformed the country in just a few decades, the public has mostly been calm and accepting. One reason may be Canada’s unusual immigration policies. A sponsorship system, in which Canadian families host newcomers, allows communities to feel they are a part of the country’s refugee resettlement program,” she adds.