Monster in the Sovereign Myth: Putin’s Russia and the Image of Leviathan

For those fleeing missiles and tanks in Ukraine, one despot’s emergency is the oppression of another sovereign state. In Putin’s increasingly isolated view, Russia is not whole without Ukraine – whether that Russia appears in a nineteenth-century tsarist or a twentieth-century Soviet fantasy… The monster in the despot’s mind, even one that seems less and less in touch with reality, can wreak real havoc in the world. Putin is no longer the shadowy dictator behind serial poisonings of those who oppose him, no longer the face on the wall behind a power-hungry mayor in a movie; his campaign of wholesale destruction has come within twelve miles of the Polish border.

In the 2014 Russian film Leviathan, directed by Andrey Zvyagintsev, a car mechanic named Kolya faces a string of misfortunes that echoes the tribulations of Job: the local mayor is after his house and land, his wife sleeps with the Moscow attorney trying to help him, her body is found on the rocks by the seashore, and he is imprisoned for her murder. In the end (the spoiler is important here), the mayor takes over Kolya’s property to build a lavish church for his friend the priest, who tells his congregation to “trust in God” in the final scene. My short summary doesn’t do justice to the film’s long moments of grim beauty: sweeps of barren land and power lines and sea, a rainy windshield reminiscent of Nuri Bilge Ceylan’s 2011 Once Upon a Time in Anatolia, and a whale skeleton that somehow companions Kolya’s despondent son on the beach.

The whale is emblematic of the film’s Leviathan title, standing for the immense sea creature God tells Job that he will never comprehend, in the poetic climax of the biblical text. Amid several other films with the same title in the past 35 years (including a sci-fi horror movie and a docu-fantasia on the US fishing industry), this one plays on the frightening mystery of unknowable life in the ocean, but in a more allegorical way. The forces at work in – and against – Kolya’s life are centered not in the sea but in the office of the mayor, who harangues the Moscow lawyer in front of a portrait of Putin. This small man’s oversized ambition, to expropriate a citizen’s home for his own project in the pocket of the church (though he claims it’s to be used for electrical infrastructure), is as senseless as Putin’s brutal attack on Ukraine, all in the service of a narcissistic, nationalist myth.

As Ruth Ben-Ghiat has pointed out, strongman figures have several traits in common, despite individual forms of “charisma” that attract populist sentiment: they “channel nostalgia” while imagining a grandiose nationalist future; they share “paranoia” and “narcissism”; they “need intellectuals to rewrite the schoolbooks to support their nationalist historiography”; and they rely on “toxic, arrogant masculinity … they let their bodies become kind of emblems of national strength.” In the office scene in Leviathan, the mayor uses Putin’s portrait to make himself seem larger and to legitimize his own arrogant project. Putin looms behind him, more threateningly if one sees the movie in 2022, as bombs explode in schools and homes and hospitals across Ukraine in present time. The elusive monster lives.

The word “leviathan” has not always sounded menacing in a political context. In his 1651 treatise Leviathan, Thomas Hobbes used the biblical image to stand for a more benign form of sovereignty: a social contract in which individuals trust in a despot who knows best and acts for the common good. The book’s frontispiece image shows an oversized human figure with scales for skin, representing the multiplicity of individuals in the social contract. This idealistic notion has of course failed to hold up amid the power grabs and barbaric wars of the past century, and it seems even more out of touch today. Political philosophers who have brought Hobbes’ idea into debate with modern history include Carl Schmitt, whose 1938 The Leviathan in the State Theory of Thomas Hobbes was a form of reckoning with his sense of betrayal in the Nazi party – and an effort to detach the leviathan image from its own mythology, seeing it instead, via Hobbes, as a “machinic antimonster” (Wainwright and Mann, 2018: 14). This text’s anti-Semitic, anti-democratic strain works against the pluralism Hobbes’ own text attempts to allow, favoring instead an idea of nationalist homogeneity.

The political philosopher Giorgio Agamben (among many others) has engaged with Hobbes and Schmitt in showing what happens when sovereignty insists on a permanent “state of exception,” as occurred after September 11, 2001 in the United States. “The declaration of the state of exception has gradually been replaced by an unprecedented generalization of the paradigm of security as the normal technique of government” (Agamben, 2005: 14). In the Afghanistan and Iraq war decades, with amplified state powers encroaching on civil rights at home, the US became an example of sovereign power far exceeding Hobbes’ beneficent ideal. In comparison with the current era of growing populist nationalism around the world, however, even George W. Bush’s falsely justified “Operation Iraqi Freedom” seems (also falsely) benign. Walter Benjamin’s 1921 insight that a “state of exception” or “emergency” can be the norm continues to haunt political philosophy today: “The tradition of the oppressed classes teaches us that the ‘state of emergency’ in which we live is the rule. We must attain to a concept of history that is in keeping with this insight. Then we shall clearly realize that it is our task to bring about the real state of emergency” (Benjamin, 1969: 258). 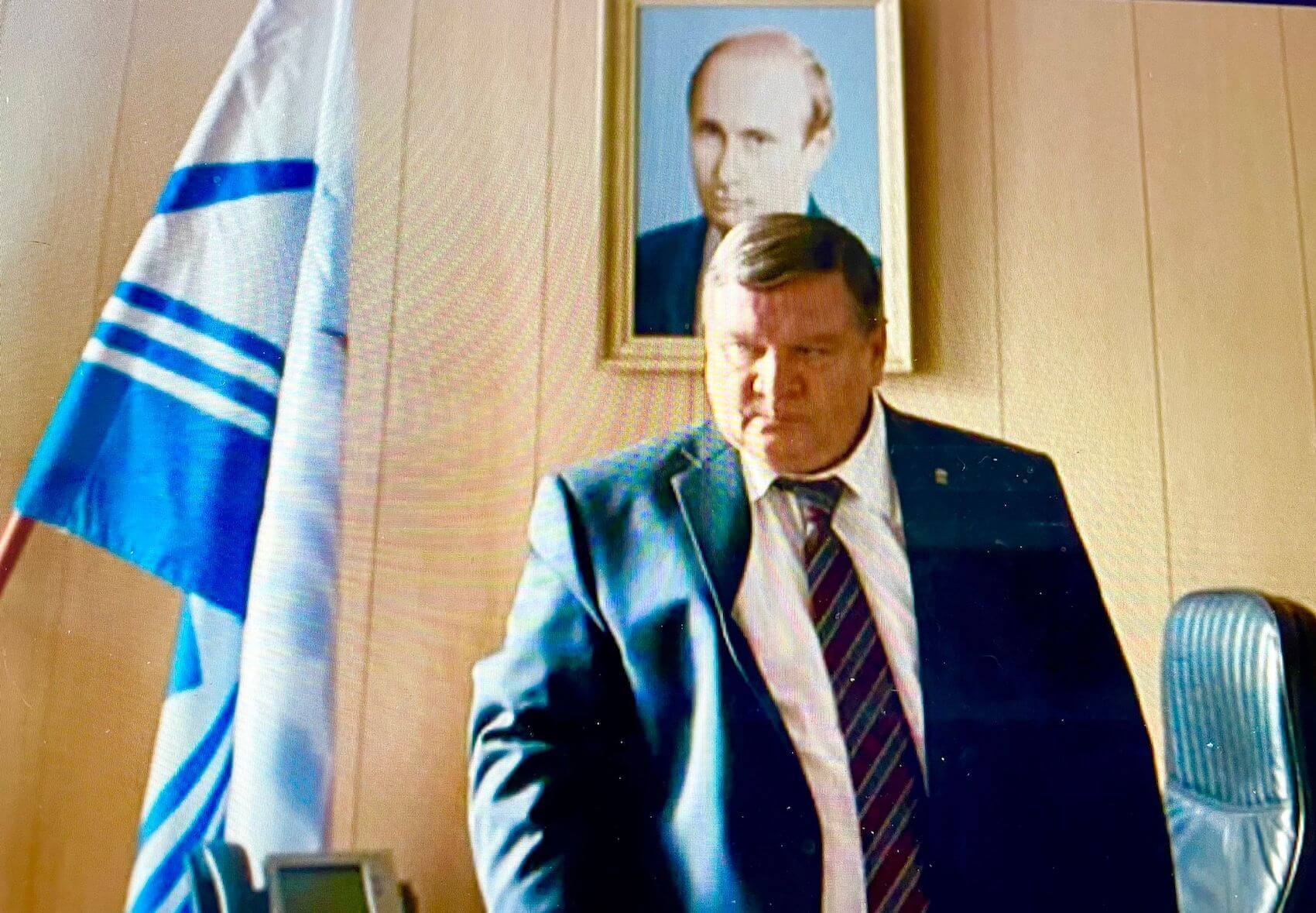 A scene from the movie “Leviathan”: The mayor harangues the Moscow lawyer in front of a portrait of Putin.

For those fleeing missiles and tanks in Ukraine, one despot’s emergency is the oppression of another sovereign state. In Putin’s increasingly isolated view, Russia is not whole without Ukraine – whether that Russia appears in a nineteenth-century tsarist or a twentieth-century Soviet fantasy. Waking the “leviathan” of an idealized Mother Russia baffles many in Moscow (at least those with access to factual news), as much as those in Europe and the US, watching our own leaders walk the precarious line between military aid and outright intervention. The monster in the despot’s mind, even one that seems less and less in touch with reality, can wreak real havoc in the world. Putin is no longer the shadowy dictator behind serial poisonings of those who oppose him, no longer the face on the wall behind a power-hungry mayor in a movie; his campaign of wholesale destruction has, as of this writing, come within twelve miles of the Polish border.

This dictator has caught the world off guard. Even in a recent, research-based novel postulating how the next world war might unfold in 2034, China is the aggressor against Taiwan, baiting a US warship and launching a conflict between a future form of NATO and a China-Russia-Iran alliance, in a time when today’s brands of populist nationalism seem to have dissolved. The worst thing Russia does is destroy undersea internet cables, along with some sharks in the wrong place at the wrong time. When I reviewed this book last month, I took issue with its fleeting references to climate crisis, sensing that the heavy wars to come will be more local, as water and food and breathable air become dangerously scarce. I also felt the authors placed too much nostalgic value on the epic-movie, “good, clean war” of tanks, fighter jets, and a common enemy (Hart, 2022). Now, seeing these machines in live and horrifying footage makes me think history is cyclical in a more literal than just ideological way. I did not see this coming, though I worried about Putin’s posturing and “de-nazification” propaganda. Even if the US is, for once, on the right side of this conflict, that’s cold comfort as the news of bombings and civilian deaths grinds on, and as the nuclear threat (that old Cold War leviathan) raises its head, however vaguely, in anti-NATO rhetoric.

Putin’s invasion is especially sinister in a world just wobbling out of a pandemic and amid a climate threat that this conflict only exposes and increases, with oil production ramping up to meet the resulting energy crisis. Developed countries’ fossil-fuels addiction has become painfully clear. What forms of leviathan will rise up next to haunt, torment, or maybe even aid us humans and the many other species now at risk? A 2018 book addressing this question, before history’s latest turn made it far messier, is in fact titled Climate Leviathan. The authors trace their term through Hobbes and Schmitt, Benjamin and Agamben, to posit three possible models for climate-crisis response: “Capitalist Leviathan,” or technocratic adaptation in the neoliberal vein; “Climate Mao,” or large-scale Communist-style efforts to reduce emissions; “Climate Behemoth,” or reactionary resistance, Trump-style, to enforcing regulation or reduction of carbon profits; and “Climate X,” or environmental organizing efforts in the form of “mass boycott, divestment, strike, blockade, reciprocity” (Wainwright and Mann, 2018: 182).

Though they could not have foreseen today’s monstrous show of “sovereign” power, Climate Leviathan’s authors place their own bets on “Climate X,” which can apply to anti-strongman uprisings as well. If the sheer number of protesters risking the streets in Moscow and St. Petersburg, not to mention bottom-up resistance in Ukraine, is any indication, there is a chance that activism may have some effect. The “village consciousness” or collective, wandering narrator in Ukrainian literature, as in Nikolai Gogol’s equally disturbing and hilarious stories (for all his tug-of-war between Russian and Ukrainian nationalisms), gives me hope. Films like Zvyagintsev’s Leviathan remind me what’s at stake, though, and that the persecuted underdog does not always win, or even survive. The end of the current news-ticker and satellite-image movie that I cannot bear to see is a dictator glorying in his stolen edifice and asking for the people’s trust.