Right-wing populism beyond the West

This series profiles electorally successful right-wing populists outside the widely studied contexts of Europe and the Americas. I commence with empirical studies of Recep Tayyip Erdogan, Narendra Modi and Benjamin Netanyahu. In a next step, I probe the commonalities and discontinuities of these three populist leaders and reflect on the global phenomenon of right-wing populism and its relationship with processes of democratisation and democratic backsliding. These commentaries are based on research published in Democratization, Volume 27, No. 8 (2020), available at https://doi.org/10.1080/13510347.2020.1795135.

Turkey suffered a spectacular fall from grace in the global democratic imagination. Once celebrated as a ‘model for political learning’[1] and the Middle East’s ‘only Muslim Democracy’[2], Turkey has become a ‘U.S.-style executive presidency – minus the Supreme Court and Congress’ (ECFR, April 8, 2017) and ‘the biggest jailer of journalists in the world’ (Amnesty International, 2017). Of course, Turkey is not the only country to have recently experienced democratic backsliding. Yet, the Turkish case differs from the more familiar instances of populism witnessed in Europe and the Americas. The populist playbook employed by Turkish President Recep Tayyip Erdogan offers a partial blueprint for the antidemocratic populist strategies employed by other right-wing populists. This populist strategy combines neoliberal economic policies, religious polarisation and media capture. Let us begin with a glance at the country’s democratic legacy.

Even before Erdogan’s tenure at the helm of Turkish politics, democracy in Turkey was plagued by top-down, autocratic tendencies, manifest in four military coups between 1960 and 2000. Elected in 2002, Erdogan’s centre-right Justice and Development Party (AKP) presented itself as a moderately Islamist alternative to the secular Kemalism of the Republican People’s Party (CHP). Invoking alignment with the European Union (EU) and the prospect of eventual accession, the AKP promised to improve individual freedoms, reduce the military’s role in government and better recognise Kurdish language and culture. These noble ambitions notwithstanding, the AKP repeatedly clashed with secularist political establishment, committed to upholding Mustafa Kemal’s prohibition on virtually all public manifestations of religion.

Promising to defend democracy against the alleged coup-plotters, Erdogan used the state of emergency to undermine democratic institutions by cleansing them of alleged ‘terrorists’ and ‘traitors’. 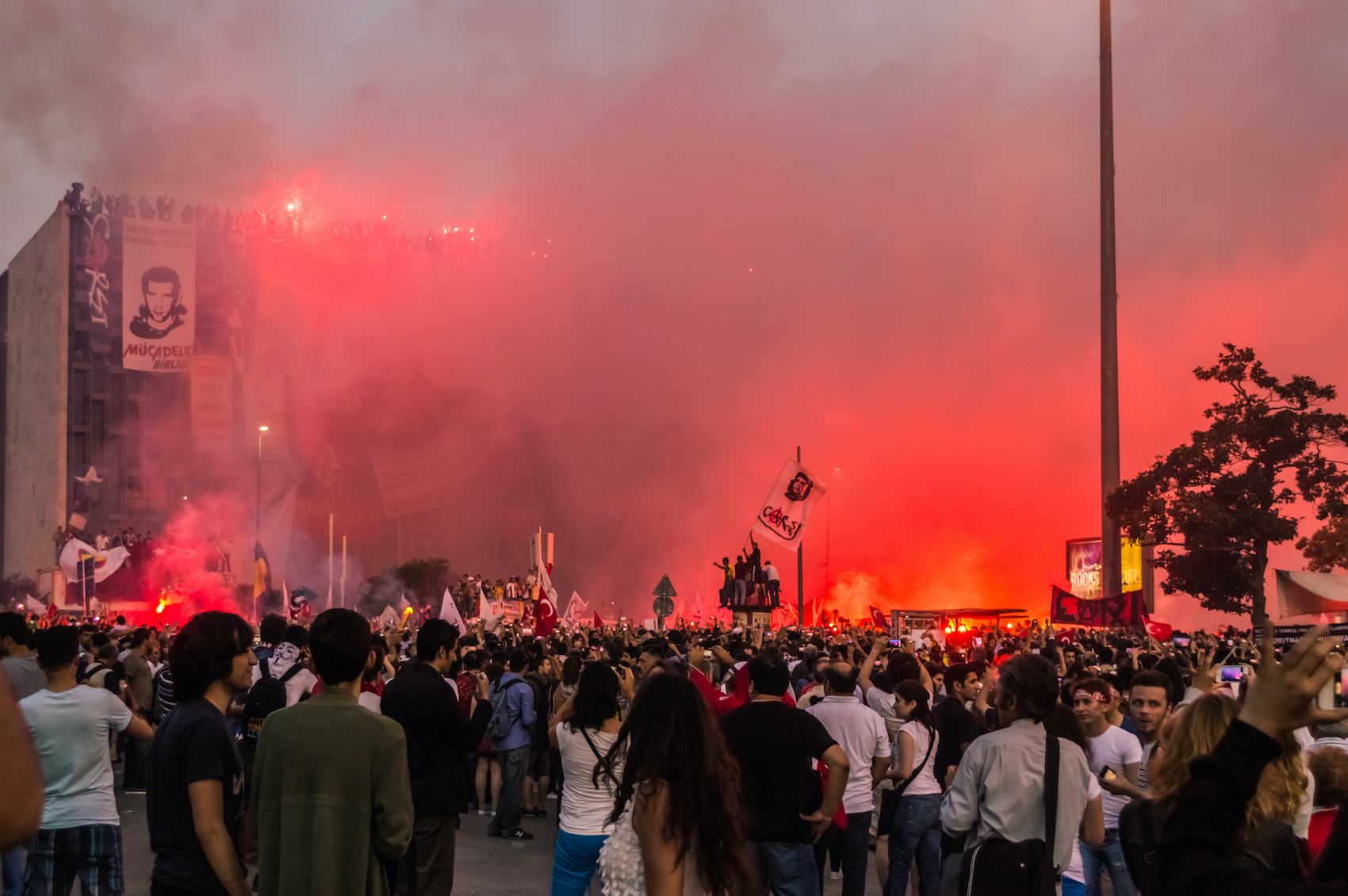 Civilians demonstrated near the Ataturk Culture Center (AKM) building during the Gezi Park protests in Istanbul, Turkey on June 08, 2013.

For instance, the AKP’s 2007 appointment of President Abdullah Gul, whose wife publicly wears hijab, triggered a constitutional crisis and an investigation of the AKP for violating the principle of laicism. From 2008, the Ergenekon trials sought to combat the role of the deep state (the military, bureaucracy and secret service) in government affairs. At the same time, lawsuits against bureaucrats, NGOs, civil society and journalists evidenced the AKP’s willingness to rescind civil liberties to reaffirm its own power. Following a series of resonant electoral victories, the AKP increasingly weakened national institutions staffed overwhelmingly by Kemalist rivals. Erdogan’s violent crackdown on peaceful protesters at Istanbul’s Taksim Gezi Park in 2013 showcased this distaste for all political opposition to a global audience.

Less than three years after the Gezi protests, the failed coup attempt of July 2016 ushered in a fundamental change for democracy in Turkey[3]. Promising to defend democracy against the alleged coup-plotters, Erdogan used the state of emergency to undermine democratic institutions by cleansing them of alleged ‘terrorists’ and ‘traitors’. The measures enacted after the 2016 coup attempt are part of a multi-pronged populist strategy to monopolise political power in Turkey. Its antidemocratic effect is compounded by harsh repression of elected Kurdish politicians, civil society groups and minority populations. While highly significant, the Kurdish issue is too large and complex to be satisfactorily analysed in this series.

In the economic realm, Erdogan employs a variant of neoliberal clientelism. Despite promoting a series of business-friendly policies – such as the privatisation of public land,  and the weakening of labour unions – the AKP receives the majority of its votes from economically disadvantaged sections of society[4]. These voters are kept onside using Islamic charity networks who distribute benefits and services in the AKP’s name[5]. At the same time, clientelism reached new levels under Erdogan. Kickbacks from AKP-friendly enterprises constitute a major source of donations for party affiliated organisations[6]. The same enterprises benefited from lucrative public-private partnership construction contracts with AKP controlled municipalities. The catastrophic tenure of Berat Albayrak (Erdogan’s son-in-law) as Minister of Finance and Treasury (July 2018 until November 2020) and the military drone contracts awarded to Selcuk Bayraktar (his other son-in-law) exemplify a political system that places loyalty above competence (Al Monitor, September 11, 2019).

In this economic order, citizen loyalty for democratic institutions is undermined as jobs and benefits cease to be a matter of rights or merit but are tied to membership of an AKP supporting “people”[7]. Thus, after the 2016 coup attempt, Erdogan used the state of emergency to disown the “enemies of the people”. His government appropriated over one thousand schools, companies and hospitals owned by members of the Fethullah Gulen-affiliated Hizmet Movement allegedly behind the attempted coup. It also sold seized businesses, such as the Koza-Ipek Conglomerate, to AKP loyalists. Thus, by combining business friendly liberalisation, clientelism and expropriation the AKP increasingly monopolises the Turkish economy. 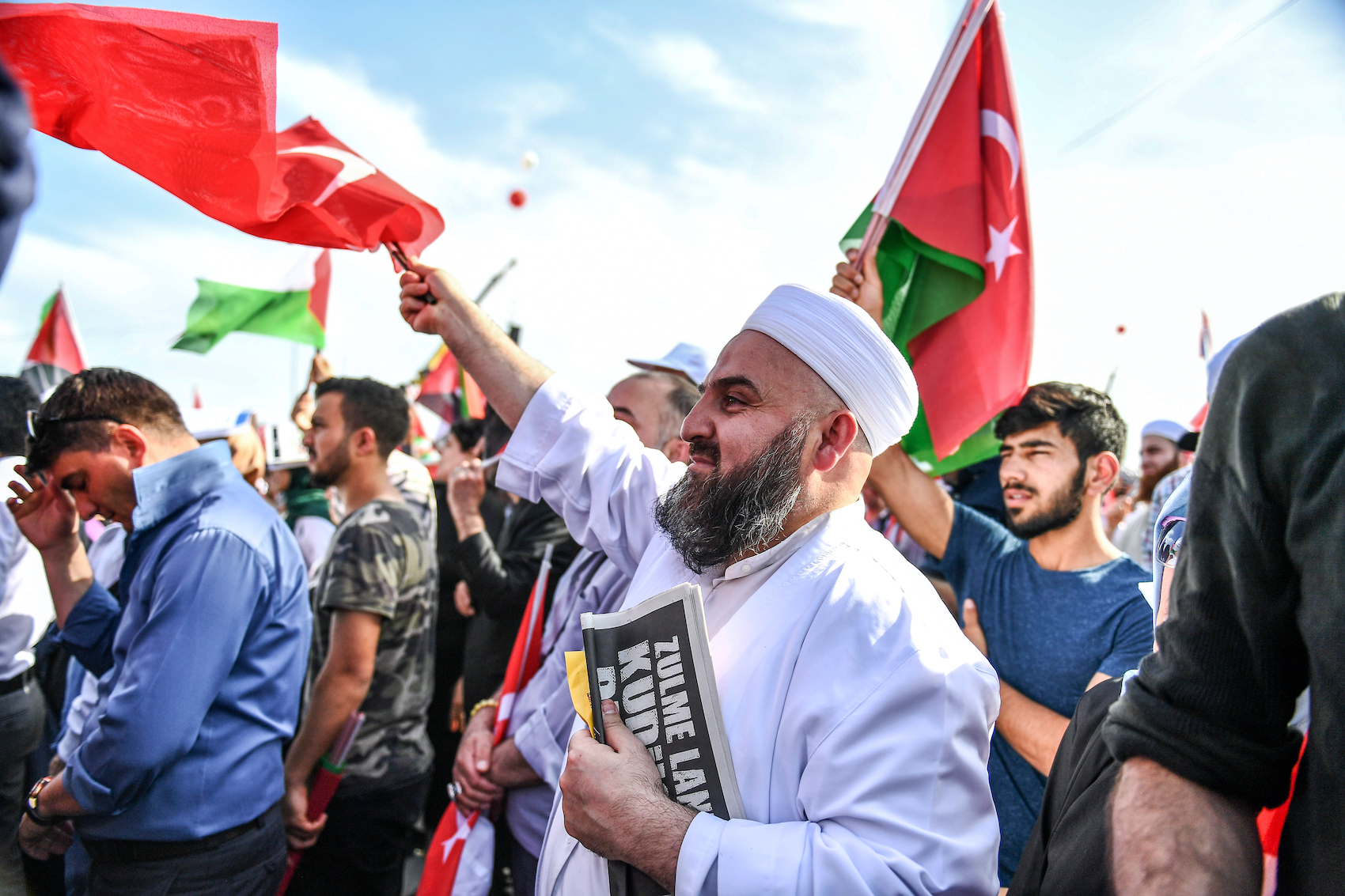 Supporters of Turkish President Erdogan follow his speech during an election campaign rally of Justice and Development Party (AKP) in Istanbul on June 17, 2018.

From 2011 onwards, Erdogan increasingly used the Directorate of Religious Affairs, Diyanet, to entrench AKP narratives in mosques, religious and educational institutions[8]. In addition to imposing its own religious interpretations and mobilising religious segments of society in support of Erdogan, the AKP used Diyanet to supress dissent against the regime[9]. This conscious politicization of an avowedly non-partisan state body entrenched distinctions drawn by Erdogan and the AKP between the religious “people” and their secular “enemies”. The exclusive definition of the “people” around Islamic institutions and AKP support allowed Erdogan to privilege conservative values and traditional family structures[10]. Women contemplating abortion, single mothers and other “non-traditional” family units face discrimination and are labelled unpatriotic.

The July 2016 coup attempt inspired a new level of religious polarisation, in which the “enemies of the people” were extended to include Muslims supportive of- or allegedly affiliated with Fethullah Gulen. Ten-thousands of, so called, “Gulenists”, were dismissed from their jobs, arrested and/or detained as alleged ‘terrorists’ and members of a criminal ‘cult’ (The New Yorker, October 10, 2016). Erdogan’s self-characterisation as the leader of the faithful disavows large swathes of Turkish society, who are either secular, non-Muslim or critical of Erdogan’s regime.

Beyond this highly instrumental approach to religion, the AKP’s relationship with Turkey’s mass media is characterised by its willingness to arrest journalists for allegedly spreading terrorist propaganda[11]. From early into his tenure, then-Prime Minister Erdogan painted mainstream media moguls like Aydin Dogan as the tools of “deep-state”, an elitist faction scheming to undermine the “people’s will”. More recently, Dogan Media Company – once the owner of major newspapers and television channels – was left no option but to sell its media outlets to Demiroren Holding a conglomerate with close ties to the President Erdodan (New York Times, 21 March 2018). Olay TV, another independent news channel, was forced to close due to government pressure (Ahval, December 26, 2020).

Looking back, Erdogan’s attack on democracy amounts to a “perfect storm” – in which clientelism, religious messaging and media capture combine into an antidemocratic populist strategy. 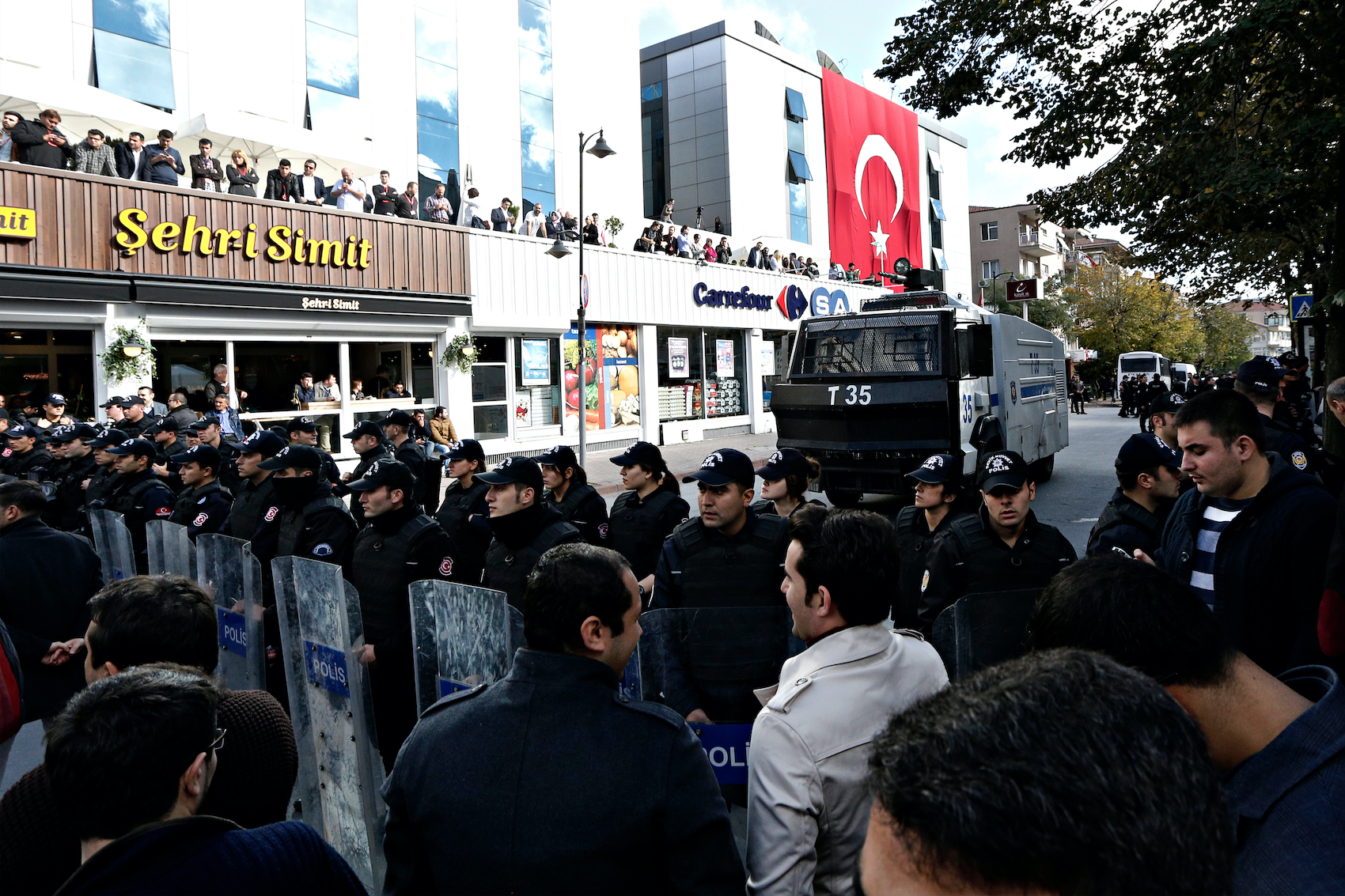 Turkish riot police bloc protesters as they surround the headquarters of a Ipek Media Group linked to a Erdogan regime critic, enforcing a court order to seize the media outlets, in Istanbul October 28, 2015.

Fourth Pillar of Democracy Was Undermined

In addition to undermining mainstream and critical media outlets, the AKP now controls the messaging of the public broadcaster TRT and the state-run Anadolu news agency, thereby further side-lining critical and opposition voices[12]. Pro-Erdogan businesspeople are encouraged to fund media outlets, publishing houses and creative agencies filled with uncritical government supporters. Invasive laws and media blackouts nurture a culture of overt- and self-censorship among journalists[13]. During the state of emergency declared in 2016, this fourth pillar of democracy was comprehensively undermined. Large-scale media censorship, widespread arrests of journalists and the closure of additional media outlets sparked an exodus of critical journalists out of the country[14]. Independent voices were framed as illegitimate plotters against the “people”. This latest stage of Erdogan’s populist media-capture strategy undermines the principle of accountability of the ruler to the ruled, as to have any practical significance voters need accurate, verifiable information about the government.

Looking back, Erdogan’s attack on democracy amounts to a “perfect storm” – in which clientelism, religious messaging and media capture combine into an antidemocratic populist strategy. Key figures in Turkey’s democratic opposition – including Selahattin Demirtas the Kurdish leader of the progressive pro-minority Peoples’ Democratic Party (HDP) – are imprisoned and defamed as terrorists.

As the next part of this series will suggest, Turkey’s democratic decay is emblematic of a wider trend affecting democracies across different religions, cultures and geographies. Despite its severe democratic decay, Turkey is still deemed an indispensable partner by many within the EU and a key NATO ally. This picture is complicated by military escalations with its long-term rival Greece (ECFR, March 13, 2020), its meddling in the Libyan civil war, its purchase of Russian S-400 missiles and Erdogan’s continued assault on international institutions – including the European Court of Human Rights (Al Monitor, December 23, 2020; Politico, December 10, 2020).

The collapse of the 2016 EU-Turkey Joint Statement on migration in March 2020 exposes another key vulnerability for Turkey’s democratic partners. Having effectively abandoned Turkey’s prospects for EU accession in 2005, Europeans have surrendered a key means of encouraging Turkey’s democratisation. The failure of democracy in Turkey does not bode well for a world in which democratic values are increasingly questioned. 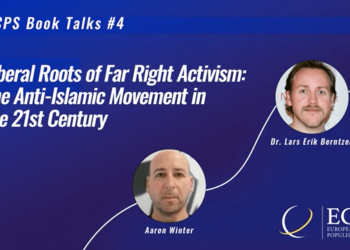