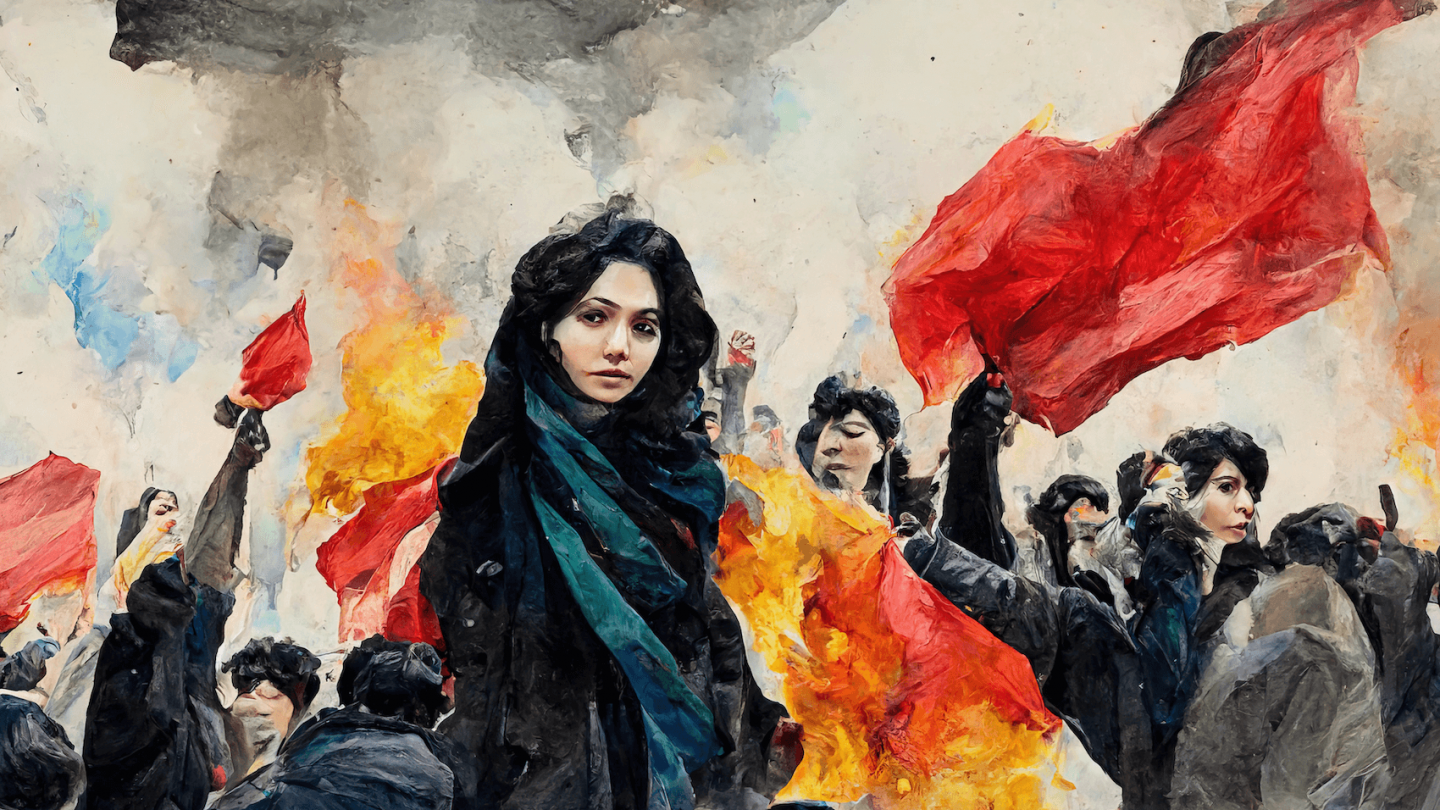 Both Islamism and far-right populism claim power and control over women’s bodies by imposing rules around the hijab. In Iran, women are expected to submit to the regime’s despotism and wear a hijab despite personal preferences. However, in France, under the guise of liberal values, far-right populists are advocating for a ban on hijabs and other religious symbols in public spaces. This antagonism towards the hijab is postured as saving Muslim women from the patriarchy and religious oppression, yet it still robs women of a right to choose.

Debates around women’s bodies, particularly those of Muslim women, have grown globally in the wake of Mahsa Amini’s death under the custody of Iran’s morality police after being detained for ‘improper’ hijab-wearing. For a better understanding of control over women’s bodily autonomy, the concepts of political Islam and far-right populism need to be examined.

The term political Islam, otherwise known as Islamism, ontologically implies resistance against secular and Western systems of governing. Criticizing secular ideologies, political Islam aims to establish a political system based on Islamic doctrines in addition to creating a unified religious identity for the whole of society. In the Routledge Handbook of Political Islam, Shahram Akbarzadeh argues that “much like other -isms, Islamism imposes a normative framework on society in a blatant attempt to make society fit into its mould” (Akbarzadeh, 2012: 1). Being a reactionary movement, which aims to shape society and the state through the agency of religion, political Islam manifests itself as challenging both previous governments and the West. Akbarzadeh cites Mohammad Ayyoob to explain the incentives behind this challenge: “Political Islam gained increasing support as ‘governing elites failed to deliver on their promises of economic progress, political participation, and personal dignity to expectant populations emerging from colonial bondage,” (Akbarzadeh, 2012: 2).

Besides denouncing their regime, Islamists also stand up to the West through the medium of “anti-Americanism”. They claim that all their political opponents are failures because they “deviate” from the divine path. The concerning facet in this approach is the blurry definition of this so-called divine path. In other words, Islamism or political Islam acts as an empty signifier that can be filled with subjective interpretations of Islam. To be more precise, an Islamist leader who claims to be representing divine “sovereignty” can legitimize his practices through a religious discourse that cannot be denied by society since it may appear as resisting divinity.

Akbarzadeh touches on this hypocritical aspect of political Islam; On one hand, actors who hold an Islamist position reject others’ interpretation of religious doctrine on the basis that it is not divine, but on the other hand, these same actors interpret Islam according to their personal interests, like gaining more power. In this case, political Islam deliberately serves to oppress discourse on economy, morality, and authority. According to Akbarzadeh (2012), “the combination of the exclusive claim on divine truth and the capture of political power” gives the authorities a legitimate right which can be hazardous for the society since this power “can easily manifest as acts of violence.”

While Akbarzadeh’s definition of Islamism identifies it with resistance, Esposito adopts the concept of “resurgence” while discussing political Islam. In this lens, it is the combination of “resentment over political and social injustices” and “issues of identity” which merges faith and politics in order to establish an “Islamic revival” (Esposito, 1997). This resistance approach, which strengthens itself with exasperation and revolt against both domestic and Western ideologies, helps governments pave the way for “enhancing their legitimacy and to mobilize popular support for programs and policies” (Esposito, 1997).

However, the state is not the sole actor to reap benefits from Islamism. Social movements and companies that affiliate themselves with Islamic identities also generate opportunities to establish new businesses, such as hospitals, banks, and schools, and work to accommodate their associates in these organizations. The most pertinent point Esposito raises in his article questions “whose Islam” is this and “what Islam” is. The answer concerns the idea of power, which we can find in the hazardous mixture proposed by Akbarzadeh. As such, the compulsory hijab in Iran implemented by the country’s Islamist regime and its enforcement through the support of society can be understood by the aforementioned definitions and discussions of political Islam.

On the other hand, the hijab ban, or alternatively the adverseness against wearing hijab in public places in some European countries such as France, can be seen as representing another disregard of women’s bodily autonomy. In this context, far-right populism and Islamophobia have had a significant role in shaping public discourses against the hijab. As a result, it is necessary to shed light on the seemingly discordant approach in the far-right discourse on the subject. By “framing Islam as a homogenous, totalitarian ideology which threatens Western civilization” (Berntzen, 2021: 11), the far-right, for this issue, appears to abandon its traditional, radical, authoritarian attitude and move towards a more liberal, modern, rights-based strategy. Such a strategy focuses on presenting a liberal attitude and liberal optics by a “transformation as a partial decoupling between authoritarianism and the radical right through an adoption of liberal positions on many issues” such as free speech, democracy, gender equality” (Girdap, 2022). The framing of the discussion surrounding the hijab in France and similar environments needs to be understood in the context outlined above. In addition to this, we must take into consideration the issues of racism and radicalization in Europe in terms of Islamophobia and gendered racism.

Crystal Fleming, in her book Resurrecting Slavery: Racial Legacies and White Supremacy in France, describes France “not only as a racialized social system but also as a racist society for at least three reasons. First, racial bias is embedded within the nation’s institutions… Second, racial categories and stereotypes are prevalent in everyday life…. Finally, present-day inequalities are related to historical racial categories and openly racist practices rooted in colonialism and slavery” (2017: 8-9). Far-right populist discourses frame Muslims as inferior and second-class citizens through a colonialist ideology entrenched in the country’s system and society. This structural frame impacts Muslim women to a greater extent as their religious identities are more visible and claims over gender equality are more easily conducted through the hijab debate.

In conclusion, reflected in Mahsa Amini’s tragic death and discourse around women’s bodily autonomy, political Islam (Islamism) on the one hand, far-right populism on the other both claim power and control over women’s bodies using hijab as a proxy. In Iran, through compulsory hijab, women are expected to submit to the regime’s despotism and wear hijab despite personal preferences, no matter what. However, in France, under the guise of liberal values, far-right populists are advocating for a ban on hijabs and other religious symbols in public spaces.  This antagonism towards the hijab is postured as saving Muslim women from the patriarchy and religious oppression, yet it still robs women of a right to choose.